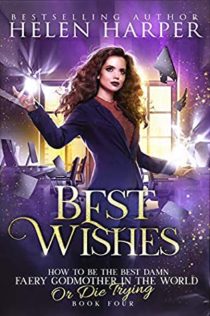 If wishes were horses, beggars would ride.
Saffron Sawyer is on her own. She’s no longer part of the Office of Faery Godmothers - in fact, she’s no longer part of anything, even if her magic is stronger now than she could have ever dreamed possible. Thwarted at every turn and stalked by monsters in the streets, her life feels like it's falling apart.
But Saffron isn’t going to give up hope. She’s sworn revenge on the Director and she can’t forget about Jasper and the way he makes her feel. And when some familiar faces come knocking at her door, she might just have found the answers she’s been looking for.
Best Wishes is the fourth and final book in the refreshingly original series How To Be The Best Damn Faery Godmother In The World (Or Die Trying).

I really wish the other three stories were more like this one.

In the first three books Saffron Saywer tried her hardest to be the best damn fairy godmother for the most unpleasant group of asshats ever. Nepotism was rampant and the Director who brought Saffron in to use as bait for kidnappers, believes that Saffron isn’t cut out to be a fairy godmother, which had to do more with breeding than qualification. At the end of book 3, Saffron told the Director to shove the job up her nose and left.

Well, I thought she had a plan to take down the Director and fix everything wrong with the Office of Fairy Godmothers. Well…I was wrong. We did start this story out with Saffron moaning because she didn’t have a job, her old job with the Dope Fairies was now inundated with applications as everyone thought that would be the next step to becoming a faith godmother, and the Director had tainting Saffron’s name with every other department head. Saffron resorts to working in the local human supermarket to cover her rent.

Luckily for Saffron that her former co-workers have a plan of their own and they want Saffron on their side. They want to open a competing office granted wishes. Apparently they can do this, but they need to get the approval of the Devil’s Advocate. Jasper might say he can be partial in fulfilling his duties, but he is still hurt because he thinks Saffron turned away from him after he confesses his darkest secret.

They might have started out competing with the Office of Fairy Godmothers as a way to provoke the Director to strike out at them so they can get the proof they need against the Director, but the more this groups works through the possibilities, the more they want to make a success of their new venture. Except they might have underestimated how desperately the Director wants to win and how low she will sink to put them out of business.

I really had it wrong when I finished book three. I thought Saffron quit as part of a grand plan, which included why should couldn’t be with Jasper. The Director wanted to blackmail him and need Saffron’s help to do it. I also thought Jasper would figure out that there was something suspicious about the way Saffron turned away from him but left everyone to believe that Jasper wanted nothing to do with her. I though maybe he would even use his invisibility to spy on her because he needed answer, but this was not the case. For the intelligent Devil’s Advocate, Jasper let hurt feelings keep him from seeing that there was a lot more going on .

Overall, this story was much better than the prior three. Here we focused on the fairy godmothers and not the very badly concocted fairy godmother job of figuring out wishes. They did have a time trial on granting a wish, which again was a stupid plot and we could too easily see the solution while the godmothers fumbled around.

I really liked the prior Helen Harper series and even have a copy of Book 1 of her next series, but this one just didn’t do anything for me. While it started off as a cute idea of fairy godmothers being the pinnacle job, and Saffron being a dope fairy creating hallucinations for her high clients, and the Devil’s Advocate being the overseer of Fairy Departments, the whole story device of how fairies grant those wishes with no database of information on the person, you don’t get a card with their actual wish on it, and you can’t even invisibly spy on them. Saffron is showing up at someone’s door trying to meet her clients and obviously, “Hi, I”m your fairy godmother. What’s your wish?” doesn’t work. Then after we spent 200 pages watching her being knocked about or chased, she figures out some obscure wish. If I hadn’t enjoyed her prior stories, this series would make me pass on further Helen Harper. I’ll have to wait and see what the next series brings. 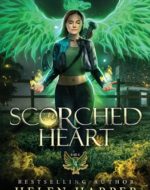