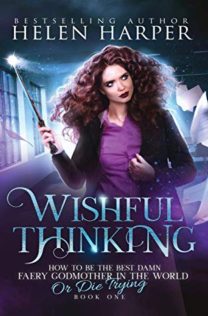 Muddled magic. Missing faeries. She’s having one spell of a day at work…

Saffron Sawyer aspires to rise from the magical world’s bottom rung. But when her wish to join the renowned Office of Faery Godmothers is granted, bullies make her first day on the job unbearable. And to add to her misery, she discovers that someone is abducting her coworkers one-by-one.

Desperate to prevent another kidnapping, she scrambles to piece together the clues. After teaming up with the handsome and powerful Devil’s Advocate, she uncovers a strange connection between the disappearances and her lowly former gig. But when Saffron learns her promotion was only a ploy, she vows to ruin the devious plan.

Can Saffron muster enough magic to trap the villain before she’s sacked or stolen?

Wishful Thinking is the first book in the refreshingly original How To Be The Best Damn Faery Godmother in the World (or Die Trying) urban fantasy series. If you like determined heroines, enchanting spins on old tales, and clever twists and turns, then you’ll love Helen Harper’s captivating story.

This was an interesting premise for a fantasy series and had some cute references but as it continues, it also runs out of steam. The first book is the best one of the three out so far.

Saffron Sawyer is a damned good Dope Faery. She can conjure up the best or worst trips for her clients. Her hard work has allowed her the responsibility of training new Dope Faeries and even has her on the path to someday step up to management. But Saffron has always dreamed of joining the elite and being a Faery Godmother. She has applied several times but she is still shocked when she finally gets the call from the big leagues.

Saffron has been invited to become a Faery Godmother but instead of being welcomed with open arms, everyone is treating her like an unwanted intruder. Everyone except the Devil’s Advocate, who has just arrived to audit the Godmothers.  Jasper arrives at the same time as Saffron and while he is intimidating, she doesn’t cower in fear of him like everyone else.  This sparks his interest since Saffron’s kindness and sunny disposition are so different from how people usually act around him.

What no one is telling Saffron is that Faery Godmothers are being kidnapped and that the Director is hoping that someone makes a grab for Saffron. Her hope is that the streetwise Dope Faery will get them some answers of what happened to the missing Faeries. And if something happens to Saffron, the Director doesn’t really care.

This one has a little bit of a darker side than the other Helen Harper stories that I have read. And while it can have clever moments like the Dope Faeries and Rainbow Faeries and the Devil’s Advocate, the fact that Saffron has to figure out her client’s wish is the main focus of the stories and seems like a lot of work, and certainly more work that the other Faery Godmothers would be willing to put into it. For example, you might have wished for something blowing out your birthday candles which was picked out the magic bucket and got you assigned to a Faery Godmother, but there is no notation of what they wished for. So Saffron would follow around her clients, knock on their doors, visit them at their jobs, and try to figure out what they desire most. Memory Magic makes them forget her as soon as she leave them, but there is no invisibility so she can just observe them or no Trust Magic so they simply tell her what’s going on in their lives and what would make it better. Saffron gets beaten up and doors slammed in her face and it seems like a lot of trouble to grant a wish that was thought and made. She also needs to use a wand to cast magic.  If she uses her magic without a wand to focus it, she all but passes out from the toll it takes on her.  That is why the Devil’s Advocate is so much stronger than the other faeries since he doesn’t need a wand.

While Saffron was respected as a Dope Faery, we learn that the Faery Godmothers are all about nepotism. It isn’t that they are the elite of the Faeries. They were all just born into the best and most connected faery families who were all Faery Godmothers as well. Even when Saffron saves the day, figures out who is behind the kidnapping, risks her life and rescues the kidnapped Godmothers, she still isn’t treated with respect by most of the others and when the no longer need her as a guinea pig, they want to get rid of her.

Honestly, after finding out why her application was ignored, after the way the Faery Godmothers treat her, and knowing she was brought in because they hoped she would be kidnapped, I don’t know why Saffron just didn’t go back to the Dope Faeries who respected her. She is determined to be a Faery Godmother but the job really does suck.

There are sparks between her and Jasper and everyone notices that they check each other out when they don’t think the other is noticing.  But I find that there really isn’t enough of the two of them in the stories for a good romance, since we have to chase Saffron while she is chasing her clients around.

This is not my favorite Helen Harper series but I am in it and want to see how it goes for poor Saffron. Hopefully she gives them all the finger and moves on.