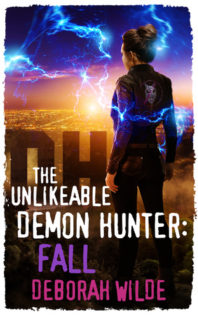 With the Brotherhood and certain witches gunning for Nava, people are taking bets on who will kill her first.

Not to mention that the shambles of her relationship have just been thrust into the spotlight for a mission to take down one of the deadliest demons she’s faced yet. A demon who’ll force her and Rohan to confront their own inner demons once and for all.

Nava heads to Los Angeles to make her bold play–on all fronts–but can she stop her foes before they destroy her for good?

And who else will have to die?

Things are coming to a head between the Brotherhood and the witches, but which side Nava, Rohan and the rest of the Rasha will fall on is yet to be seen.

We get a lot of answers in Fall (book 5 of the series), but we still have many, many more questions.

Nava is coming into her powers or is she drawing more and more on Lillith, who is still trapped in a magical cube inside her? The witches are still trying to figure out how to get Lillith out of Nava and yet still keep her and her powers trapped since she will be pretty pissed off about being thrawted and trapped to boot, like actually rip Nava limb from limb pissed off. The witches want Nava to get the Bullseye from her demon contact to help plunge Lillith from her body, like a mystical toilet clog. The problem is that Nava has been…um, binding little bits of Lillith’s magic which has been leaking out — like she will even miss it — and if the witches plunge Lillith out with their magic Bullseye plunger, they might just take Nava’s magic (both witch and Rasha) with it.

Nava is less concerned about Lillith and more concerned that her boyfriend has been in LA for the last few weeks with very little communication between them and she has no idea where their relationship stands.  Rohan is finishing up the album he started working on with the title song for Sampson’s final movie. She needs to get out to LA to see him, especially now that Nava was able to get solid proof of Mendelbaum’s involvement with controlling demons. He is planning on letting them lose on the public so that Rasha can swoop in and save the day, bringing the Rasha and the Brotherhood into the light so the Brotherhood and Rabbis can become a power against the witches.

Mendelbaum’s pet witch dead and he is looking for a replacement. Nava and Company needs to strike while he is regrouping because once he has another powerful witch at his disposal, he will launch his plans regardless of who needs to die in his grasp for power. Worse yet, if Mendelbaum were to find out that Nava is a witch and is channeling the power of Lillith, he will forget about looking for his missing witch and focus on grabbing Nava instead.

And while Nava wants to be a good little witch/Rasha and focus on defeating both Lillith and Mendelbaum, she might be able to focus a little more if she knew where she and Rohan stood in their relationship.

The main plot is coming to a head in this latest novel and while it takes awhile to get there, Nava and Rohan’s relationship is becoming a love for the ages…or is it?   Just when it looked like all of our couples were solidifying (Nava/Rohan, Ari/Kane, etc.), we turn a corner and new problems appear. This story will bring out the good and the bad and leave us hanging in the end. God, I hate cliffhangers, but it is all part of the continuing story plot.

I still love all of the characters and just want to get these relationships straightened out so we can go kill demons.

Craack. The black leather whip snapped the ground by my feet.

I jumped back. “Yikes, you really didn’t need that second espresso.”

Ms. Clara bounced on her toes. Since she was in six-inch shiny stiletto boots, her head bobbed much closer to my eyeline than usual.

“I’m just so excited,” she said in her breathy voice. “I never get to see demons, only do all the boring paperwork.”

She twisted her wrist, flicking the whip in a complicated pattern before snapping it close enough to my face that its crack vibrated down into my toes. Only a handfull of parked cars were witness to her lashing mastery on this Tuesday morning, which was too bad because she was impresive to watch.

I shielded my eyes from flying dirt. “I’m starting to regret my decision to bring you.”

“You didn’t. I blackmailed you into taking me because I have what you need. And Kane and Ari are busy.” She clucked her tongue. “Though not getting busy, which would have been far more interesting with those two.”.

“No kidding. Aren’t you hot?” I fanned out my tank top. There wasn’t much shade here under the Granville Street Bridge, though the humongous chandelier art exhibit certainly jazzed up the joint, as did the cute sailboats moored in the small marina next to the red nautical-themed yacht club with its porthole windows.

The cars rumbling up top of the bridge were a comforting white noise, the bats zipping in and out of the struts overhead were cute, and it didn’t smell like pee. All in all, a decent meeting spot.

“You like?” Slamming the trunk of her Mini Cooper, she spun around, now wearing a black leather face mask with oval eyeholes and a unzippered slash for the mouth. She stuck her tongue out. “So I can’t be recognized.”

“What in good heavens is that?”

I spun at the molasses-smooth voice, tinged with a hint of the Deep South. “Hiya, Baskerville. How’s tricks?”

The demon swallowed several times, his pronounced Adam’s apple twitching. Using all three of his fingers and his linen hankerchief, he pointed at Ms. Clara. “What are you supposed to be?”

Baskerville pressed his hankerchief to his face, the picture of a 1950’s Southern gentleman in a linen suit with pressed cuffs. Well, except for his iridescent blue skin and a snout. “No, chérie.  That’s Frisbees.”

“Child, we don’t need petty insults in our line of business.  There is a robust market for these kinds of wares and you are by no means the only demand I have for my supply.”

“How is that an insult?  You have a whiskered, wet dog nose.”

“I have a proud proboscis.  I am not a dog, demon or otherwise.  Do you see a tail on me?  Floppy ears?”

“Not floppy, but they are pretty large.”

Ms. Clara patted his arm. “Don’t worry, sugar.  According to the Japanese proverb, a powerful man has large ears.”

“She can stay.”  He blotted the sweat at his temple with the handkerchief, frowning at her face mask.  “Maybe.”

“How’s the demon world?”  Seen Malik lately?” I said.  Last time I’d seen him he’d threatened to rain vengeance down on my ass.  Then he’d gone M.I.A. and even Leo couldn’t find him.  So that wasn’t worrying at all.

He sniffed.  “I honestly cannot be expected to know the wereabouts of every demon.”

“Like you don’t. You’re the most plugged in demon around.  Come on,” I cajoled.

He sniffed at my blatant butt-kissing, but didn’t deny it.  “Suffice it to say, you’re safe form him.  For the moment.”

I motioned between Ms. Clara and myself. “We both know you aren’t going to hand over the Bullseye without wanting something in return, and my partner here is a master procurer.  She’s got a list of items to intrigue and delight.”

Baskerville raised an eyebrow.  “Such as?”

Ms. Clara coiled her whip around her wrist.  Damn, she had badass down cold. “The Vashar.”

She’d tapped into her admin network and discovered where the Brotherhood was storing the amulet capable of stopping a Rasha’s induction.  Sure, it was a risk handing it over to a demon, but if he actually used it on someone, I had a magic ritual that would make an initiate a full Rasha anyway, so it wasn’t like anyone was going to be prevented from fufilling their destiny.

I allowed myself only a small smirk at the look of surprise and greed that flashed across his face.

“It’s true, that did intrigue back when I actually wanted it.”

“But I’ve got something else in mind.”

“Let me guess, you want tears from a virgin guarded by a sleeping dragon.  Or no.”  I snapped my fingers.  “A unicorn dwelling up the ass of an ogre.”

Ms Clara frowned.  Well, she gave off a frowny vibe.  I couldn’t really tell in that face mask.  “Why do you want one of his knotted tassels?”

“My client wants it. I don’t ask questions.”

Mandelbaum wasn’t going to hand over one of the tzitzit attached to the corner of his ponch-like prayer shawl, and given he wore this mini tallit under his shirt, would probably notice if I tried to cut one off.

It’s not like tzitzis were rare. I could buy one and pass it off as the rabbi’s.

“I’ll smell if it’s the rabbi’s  You humans are very easy to read.” He glanced at Ms. Clara’s mask. “Some of you.”

“You know what Mandelbaum smells like?  That’s creepy, dude.”

Ms. Clara cracked her whip at his feet, making the demon jump.  “We could just take the bullseye from you and give you nothing.”

The demon crouched down and brushed dirt off his trouser hem.  “You could.  But you’d have nothing more than a paperweight.  The Bullseye is a delicate artifact and I’ve encased it with a protection spell keyed to my touch.”

Sparks flew off my skin.  “Let me get this straight.  I have a magic sanitary pad clogging my toilet body and to get it out, I have to handle Mandelbaum’s fringe in order to get a demon to finger me so that Esther can blow my pipes?”

Baskerville turned to Ms. Clara.  “Is she making sense?”

“Do we have a deal or not?”  He spoke very slowly, over-enunciating each word.

“Just because you don’t understand me, doesn’t mean I’m communicationally challenged.”  I pretended to think it over, though my options being steal off the rabbi’s person versus die, it wasn’t much of a choice.  “Deal.”

“Pleasure doing business with you.”