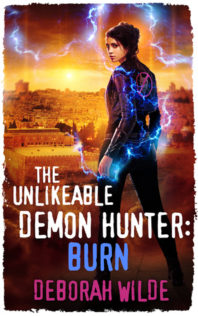 It’s the End of the World as We Know It…

Nava has come a long way from being a hot mess flying solo. She’s now one of the major players on the chessboard, leading the charge against a witch with dark magic, a power-mad rabbi, and the impending apocalypse.

Friends will die and secrets will be exposed. Add imprisonment, torture, and the biggest, baddest demon of them all who has plans for her, and it’s a lot for a girl to take in.

Time to rally the troops and make her last stand, because she’s damned if she’ll let the end of the world get in the way of her romantic, sexytimes galore, happily-ever-after.

The heart-pounding final installment to the series.

We have demons, witches, evil Rabbis and even the Dread Pirate Satan making appearances as say good-bye to Nava and the boys in this final installment.

The first time I saw the movie, The Fifth Element, my only thought was “there is just too much going on to keep track of it all.” Since that first viewing, it has become one of our favorite movies to quote and now I can see how all of the on screen chaos is needed to complete the story. I say this because while I was reading this final installment of Nava Katz, I kept thinking the same thing…there is too much going on. It never stopped. Why do we need all this? What started out as a simple story of a girl receiving a magic power that has, so far, been reserved for the all-boys club and how she had to deal with the prejudices of the old school Rabbis, is now a final story full of chaos.

We have evil Rabbi Mendelbaum and his plot to be the prophecized Mashiach, which makes him just another jerkoff pretending to be about world peace as long as he is in charge of world dominance and everything is done his way. We have witches holding the Rasha hostage and trying to steal back their magic also believing they are doing the right thing in order to reinforce the veil between demons and humans. We have Rohan dealing with dark magic after being whammied by the witches in the last battle. We have Nava who is also dealing with the residual dark magic of Lilith and who is now broadcasting Lilith’s magical signature making her the target to witches and demons alike. We have Satan who has decided he wants to forcibly mate with Lilith for stronger prodigy although Nava doesn’t actually have Lilith’s magic. And we have Nava who wants to put her frenemy Malik onto Satan’s throne since Malik likes humanity and doesn’t plan on wiping us out. So much  was happening to keep track of and I know that I should have stopped and re-read the battle at the end of Book 5 just as a refresher.

There was just so much going on in this last novel, I was starting to miss the simplicity of the first novels which were just about Nava become a Rasha and her middle school does-he-love-me-like-I-love-him romance with Rohan.

But, as the story began to wind down, I could start to see where all the pieces were falling and why all these different plot points were necessary to the final battle between Nava and the evil Rabbi. So, like my first viewing of The Fifth Element, as I finished Burn I needed time to absorb and digest all the many elements and how they fit into the final battle before I could sit down and write this review.

I enjoyed my time with Nava Katz, especially once we got past the high school romance drama between Nava and Rohan and got into the meat of the series.  It was an Urban Fantasy series which was derived from Jewish history and teaching and that is somewhat of a novelty in this genre.

My favorite plot point in this final story is the nod to The Princess Bride and a running joke in this novel.    It turns out Satan isn’t one demon.  Whichever demon can hold the throne is given the title of Satan sort of a perverted Dread Pirate Roberts.

I am sorry to see the end of Nava Katz and the Unlikeable Demon Hunter but it was fun and it most certainly goes out with a bang.

“If Satan finds me, he’ll think I’m Lilith. I can bluff him with her power.”

Malik gazed evenly at me.

Damn it! “He’s coming for me because he thinks I am Lilith. Why?”

The demon rocked from one heel to the other like the weight of the decision to tell me had acquired physical mass. “Only because he want to breed her. You know, create a line of super-demons. These irksome wards never did pose the same problem for her offspring as they do for the rest of us. In addition to that very tantalizing perk, her progeny also tend to be faster, stronger, and wield more powerful magic. It ought to come as no surprise that Satan will rape you until he has his demons and his succession is assured.” He mock-frowned. The bastard was enjoying this. “Do you have a way to prepare for that? No?”

Berserker fireworks exploded in my brain and the world swung sideways. I stuck out my hands for balance, and this insanity had momentum and a dizzying vertigo, and I swayed precariously.

Mandelbaum had treated me as insignificant from day one and now Satan himself intended to render me down to a single magic part against my will, using me to further unspeakable evil?

Rohan reached for me, then dropped his hands to his side. “Who’s acting as Satan now? Which demon’s on the throne?”

“Hang on,” I interrupted. “Satan isn’t a single demon? It’s a title? Like the Dread Pirate Roberts?” Laughter tinged with madness burst out of me. “Satan wants to ensure his lineage retains the monarchy,” I said between cackles. “Is there a coronation with nice aged blood of virgins and a crown made of intestines and human eyeballs? Or is it more of a fascist dictatorship?”

Rohan threw a quick assessing glance over me, then returned to grilling Malik. “What’s your role in all this?”

“I was charged with bringing Lila back.” The marid’s fingers flitted to his eyepatch before he thrust his hand into his pocket. “I refused initially, but we came to a compromise. I would talk her into it.”

“As appealing as spending eternity being dicked in non-consensual sex for spawn breeding sounds, I decline the offer on Lilith’s behalf,” I said. “Take that back to your master.”

Malik flickered into his flame essence for a second, before asserting his human form once more. “I bow to no master but he won’t take ‘no’ for an answer. You’ll learn that soon enough.”

My face stayed blank, my body language remained calm, yet inside I quaked at those words. “You want him to pervert her magic like this?”

“What I want is of no consequence,” He said, but did not meet my eyes.

My entire body was sheathed in silver magic before he’d finished his sentence. Next to me, Rohan had extended every blade on his body. “Then you’ll have to kill me to take me.”

“Possibly. But not tonight. As usual, our interaction has been enlightening, if not entertaining.” The demon walked into the darkness. “We’ll see each other soon.”

“Malik,” I called out softly after him. “I’m sorry. About Lilith.”

He threw his head back to the sky. For a moment, in the indigo glow of the night clouds against the tangled silhouettes of branches, his face was so unguarded he could have passed for mortal. But then I blinked and the shadows swallowed him and he was gone.

And then there were two.

I planted my hands on my hips and, fully healed and full of adrenaline, glared at Rohan. I was reeling and I wasn’t about to contend with a idiot boyfriend who believed some puny dark magic aftereffects were going to phase me. “Are those fireworks on yours practical or just for funsies?”

“Excellent. Then I get to keep the title of ‘only person in this relationship who almost went nuclear with dark magic.'”

“How can you joke? What if I’m forever changed? What good am I like this?”

I leered at him. “You look pretty good to me.”

“Rohan. I don’t see a problem here. You’re not contagious, you’re just a bit sparkier than I am right now. And if you’re worried about some darkness or whatever in you? Please. With all your personal demons when I first met you, it was a wonder you didn’t sprout wings and horns sooner. Hey, did you know you can’t spell ‘demon’ without ’emo?’ I really think we’re hitting some key insights into your psyche.”

He did not grin back. Not at first. But this was Ro and this was me and under the force of my adorable nature, I
broke him and he laughed.

“You’re something else,” he said.

“Feel free to be specific and heavy-handed with the positive adjectives, but yeah, I am.”

His eyes warmed, their abyssal depths cracking and melting away.

“I thought I’d lost you.” Rohan brushed my cheek with a faint tremble. “Tell me I’m not imagining this.”

I nuzzled into his palm. “Buddy, if you dreamed up our big reunion starring a demon attack, Malik, and me being bred by Satan like a broodmare, we’re going to have words.”

Review: Mind over Monsters by Jennifer Harlow
« Cover Reveal: The Hate Vow by Nicole French
Friday Giveaway: What If by Kelly Collins »