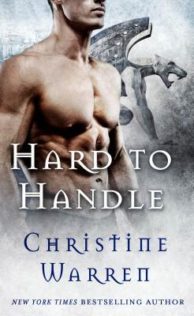 A SEDUCTION STRONGER THAN STONE

The only male among four sisters, Michael Drummond is no stranger to women’s strength and formidable will. His Dublin pub, the Skin & Bones, is his refuge, a reassuringly masculine retreat. Until a fierce woman warrior from another realm bursts into his life, bringing with her a battle between good and evil…and an explosive dose of desire.

The first and only of her kind, Ash is a lone female gargoyle, a creature destined to protect mankind from Demons determined to unleash their darkest forces. But her arrival on Earth is more confusing than she expected: her bone-deep instinct to do battle is matched only by her untamed attraction to stubborn, stalwart Drum. If they manage to keep the world safe, can they turn the passion crackling between them into a love that will withstand the test of time?

I gave up any interest in this series after the first two books, but when I saw this one featuring the first female gargoyle, I thought “Oh, maybe that will be an interesting twist.” Nope.

After reading Danielle Monsch’s Stone Guardian featuring a gargoyle hero, I jumped on Heart of Stone because — hey, gargoyles were now sexy. Except just like all paranormal series, different story, different rules and I wasn’t all that excited about this series. I only read the second book was because I was asked to cover it for H&H. When books 3 and 4 were released, I kept my head down and hoped they didn’t ask me again since I had no interest in reading any more.

So why did I read this one? I saw that this one featured the first female gargoyle ever. I really thought maybe that would be an interesting story. In fact, the main character, the female gargoyle, Ash, kept commenting that her being female must mean something. Well, guess what. Nope.  There was no big revelation of why she was female. None!

Ash was sent to replace one of the Guardians whose statue form was blown up by the bad guys.  She is the only one not  awoken from her statue form, she just appeared in front of Michael Drummond and his sister.  His sister can sometimes get flashes of the future.  Michael’s only ability is to sometimes find something which someone lost.   Michael’s sister want to help Ash find her Warden but Michael wants nothing to do with it and he wants Ash far away from his mother and sisters.

Michael is a bit of a douche for about the first half of the story until Ash says, “Hey, you’re right.  You stay with your family and I’m going to go.”  Suddenly, there is no way she is leaving him behind and he becomes all protective and possessive.  This was not a gradual building of interest.  At one point he grabs her out of the blue and kisses her, but for pages and pages he is still telling her to take a hike.  Even after they have sex, he is telling her to go find her Warden and leave his family alone.  He wants nothing to do with it,..until he suddenly does and declares that she is his.  WTF??   It was so awkward a change and by the time he finally decides to join in, I hated him.  HATED.  HIM.  I didn’t want him in the story anymore.

The couples from book 3 and book 4 eventually join Ash and Michael to protect the people of Dublin, Ireland, where this story is set.

The stories of the original Guardians said that when they were awoken by women of magic who they fell in love with, the original Guardians were released from their duty after they defeated the Darkness and new Guardians were sent to wait in their place.  This is important in this story since Ash keeps lamenting after she falls insta-love with Michael that only women of power can free a Guardian and woe is me that I will have to leave Michael and return to stone form after we defeat the Darkness.  This goes on and on until someone hits her on the head and says “Dumbass, that would work for you and Michael too.”  Really?  That was concept was too hard for her to grasp that since she is the only female Guardian, she thinks she would get screwed out of love because she loved a man with power, and not a woman with power?

And that was it.  There was no big revelation why she was sent female instead of male like all the Guardians before her.  Nothing.

I kicked myself for falling for it and picking up this book.

One response to “Review: Hard to Handle by Christine Warren”