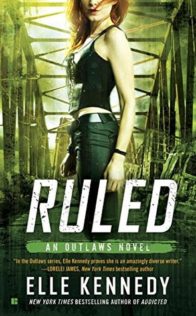 This is the third book of Elle Kennedy’s dystopian series, Outlaws and the action has kicked up. Claimed (Book 1) was our introduction to this new society, and Addicted (Book 2) started giving us more in depth look at the characters in the various groups.

This is a menage story, but what I liked best is that it was truly a bonding of all the parties into the new leadership of the Town.  When Ryan was at camp with Hudson and Conner, they all played together from time to time, but it was definitely two on one in their exploits.   Here, Rylan and Sloan spend just as much time playing pattycake with each other as they do with Reese.

In Ruled, Rylan has been chasing Reese since the moment that he saw her but Reese wants nothing to do with him and it has less to do with Rylan and much to do with how much Rylan reminds Reese of her ex-lover, Jake.  Reese, Sloan and Jake started and then ran the Town.  Jake was everyone’s friend but he had a dark side and when he started hurting women in the Town it became necessary for Reese and Sloan to take him out.

Reese can see that Rylan is missing Jake’s darker side, but she doesn’t trust her own judgment where he is concerned so when she finally agrees to have sex with him, she makes Sloan come watch in order to make sure she doesn’t get too carried away.   Rylan, who is always up for a party, tries to get Sloan to join in, and doesn’t understand why two people as close as Sloan and Reese and who are obviously attracted to each other, haven’t gotten together.   With Rylan’s help, Sloan and Reese break the barrier which has kept them apart and the three of them play while trying to decide the future of the Town.

Their actions outside of Town might just put everyone at risk.  Reese, Rylan, Sloan and several members of Connor’s outpost and Reese’s Town have been attacking the City’s Outposts, killing Enforcers and stealing guns and ammunition.  Nothing points to the Town but the Enforcers don’t trust them, especially after one of their teams went missing not long ago in her neighborhood and the tale of bandits seems just too shaky.

Now they must decide if they should risk everything by going further and trying to raid the larger Enforcer Outpost while they are still recovering from the last attack, or play it safe and lay low for awhile before the Council decides to take out Reese’s Outlaw Town.

Elle Kennedy does a great job of keeping tensions high for the surviving Outlaws who are trying to create a life for themselves even though the penalty for living outside the City is death.

This series does a great job in balancing the story for survival with the romances which reflect an attempt to grab a life in a dangerous world.  In the end, the fact that Reese, Sloan and Rylan come together as a unit both as leaders of the Town and as a romantic group, shines in this story.

He halted at the bottom of the stairwell, his entire body tightening at the sound of Rylan’s voice.  Son of a bitch. He hadn’t even heard the other man’s footsteps.

A blond head appeared at the top of the stairs, and then the man was bounding down to the basement landing.

“What do you need?” Sloan barked.

Sloan gritted his teeth. Usually he was better at masking his emotions, so either he was doing a shit job of it right now, or Rylan was more perceptive than he’d given him credit for. “Nothing’s wrong. What do you need?” he repeated.

There was a pause.

Rylan ran a hand through his hair. “Was hoping you could help me out with something.”

The anger rose again. He wasn’t stupid. He knew exactly what kind of help Rylan needed. “If this is about Reese, go harass someone else. I’ve got a genny to fix.”

He took a step toward the stairwell door, but Rylan stepped in front of it. “How ’bout this? I’ll help you fix the genny, and then you help me by coming to a private party.”

He rolled his eyes. “Yeah? Let me guess. It’s a party of three.” When the other man grinned, Sloan’s patience eroded to dust. “Not interested. Now get out of my way.”

Rylan’s groan of annoyance bounced off the cinder blocks. Under the flicering fluorescent lights, the man’s eyes were a even more vivid shade of blue, as vibrant as the cornflowers Reese liked to keep in pots on her windowsill.

“Seriously, what’s wrong with you guys?” Rylan asked in exasperation. “I’ve never met two people who are so against orgasms. What, you allergic to them or something?”

“We both know you were hard as a rock the other night, Sloan. That filthy show Reese and I put on for you? You loved every second of it. You loved holding her down while I pounded into her from behind. I saw your face. I saw this–Before Sloan could blink, Rylan’s large hand was cupping his groins–“–hard as a rock,” Rylan repeated. “So why do you keep putting up a fight? What the hell is wrong with you?”

Sloan pushed that large hand away, but not before the other man felt him hardening. When Rylan smirked, a growl tore out of Sloan’s throat. “What’s wrong with me? What the hell is wrong with you, jackass?”

“Are you addicted to sex, is that it? You got some sort of sickness that prevents you from keeping your cock in your pants?” Sloan curled his hands to fists. “You can’t go three goddamn days without getting any action? Jesus, man, you came half a dozen times that night. And then you got your rocks off again, jacking yourself in front of Reese–“

A smile flitted across Rylan’s lips. “She told you about that?”

The visible amusement only intensified Sloan’s anger. Breathing hard, he planted his palms against Rylan’s solid chest and backed the other man against the cracked concrete wall, until their faces were inches apart.

“What is everything a goddamn joke to you?” Sloan hissed.

Those blue eyes locked with his, then lowered to his hands, which were flattened against Rylan’s pecs. “What are you doing, brother?” Rylan’s voice was low, curious.

“Giving you what you want,” Sloan bit out. “Sex, right? Orgasms? Seems like those are the only thoughts your pretty blond head is capable of producing.”

“Fuck you.” A heavy hand clamped on Sloan’s shoulder as Rylan tried to shove him away. “So I like to screw. Big goddamn deal. Not everyone is as uptight about sex as you are–“

Sloan crashed his mouth down on Rylan’s before the bastard could finish that sentence.

The kiss was brutal. Merciless. A hard collision of mouths that drew a harsh grunt from Rylan, a hiss from Sloan. He thrust his tongue past Rylan’s parted lips and deepened the kiss, grinding his lower body against the erection straining behind Rylan’s zipper.

Lust surged through his blood, clouding his senses, fogging his surroundings. It’d been ages since he’d had his tongue in someone’s mouth, his dick rubbing up against a warm body.

“That is what you wanted, right?” he rasped against Rylan’s lips. “Is this party private enough for you?”

He cut him off with another kiss, as greedy and punishing as the first. Rylan’s answering growl vibrated all the way down to Sloan’s aching balls. One of his hand landed on Rylan’s waist, curling over it, digging into the waistband of the man’s jeans. His tongue slicked over Rylan’s again and again, until finally he broke their moths apart, breathing hard.

“Is that all you’ve got?” Rylan’s expression shone with humor, glittering with arousal.

Sloan almost slugged him in that pretty face of his.