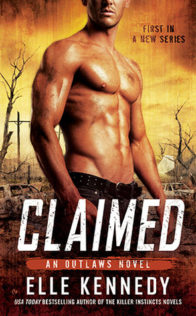 [box style=”rounded” border=”full”]Wow! I need an ice cold shower. Who knew the end of the world could be so hot?  Elle Kennedy’s incredible character development shines through that even in a world trying to survive after the bombs have dropped, you wouldn’t mind spending time with these outlaws. [/box]

The world as we know it has ended. Someone started dropping bombs and those that were left alive had to recreate society. A Global Counsel formed itself and walled up several major cities keeping its citizens prisoners for their own safety. Enforcers were given weapons and the responsibility of keeping the citizens safe and contained. The GC withholds medical attention to the citizens. It is only available to the Council members, their children who will be future councilors and the enforcers. The GC also wants to control population so they force sterilize the women who they deem unworthy to breed.

Enforcers not only control the citizens, they scout outside the walls to find bandits who will murder for supplies and are a danger to the citizens. They also search for Outlaws. Outlaws are anyone who are not contained within the city walls; anyone who the counsel does not control. The enforcers used to catch the outlaws and give them a choice, become a citizen or face death. Now someone has changed the rules and if you are caught outside the city walls, you are dead.

Hudson Lane would rather face death or whatever horror might await her outside the wall, then to marry the Enforcer Lieutenant, Knox. He might call it protecting the citizens but he is simply a murderer and a rapist and he really, really likes his job. When her brother presents her with a marriage contract declaring that she has no choice, Hudson takes off the first time she can get outside the city walls.

Hudson comes upon Connor Mackenzie and his group and begs for their protection. Connor doesn’t trust strangers and has no interest in added to the people he is already responsible for but his men out vote him and he allows Hudson in against his better judgment. All he knows is that she is hiding something and that something could bring more than trouble for them if the enforcers find their camp.

Connor isn’t wrong. Hudson isn’t just any citizen. Her father was the man who created the Global Council. A man would allow his own wife to die without medical attention to fulfill his philosophy. And Hudson’s twin brother, Dominik is the man most feared in the land. Dominik is the head of the enforcers. The man who decided that outlaws no longer get an opportunity to return to the cities. And he isn’t going to let his sister disappear into the night.

All I can say is – Wow! Not only is it steamy and sexy but more important, it is good. Many erotica stories are blah, blah, words, hot sex, blah, blah, spank me, blah.  There is no real story just words between sex scenes. Elle Kennedy gives us great world building. Connor and his group have wonderful character depth. Secondary characters are introduced and are so intriguing I can’t wait to see if they take a more prominent role in the series.

As far as the erotica part, the story has explosive chemistry between Connor and Hudson, and it was presented in a way that blended well with the overall story. The end of the world has come so most of the population, whether citizens or outlaws, engage in a lot of sexual activity.  You really might die tomorrow, so why be shy.  You find someone attractive enough and it is on. Money is not used outside of the city so bartering is the only way to acquire things you need so payment is made in sex, weapons, trading, whatever. Hudson has been living in the enforcer’s compound her whole life and her brother has been running the enforcers since his teens. Hudson had to blackmail a boy to get her first kiss and anyone who was brave enough to try to have sex with her, did it quickly, in the dark and tried not to be found out by Dominik or they would get a severe beating for touching his sister. To say Hudson is sexually repressed is not exaggerating but it is not because she doesn’t want to have sex. There is instant attraction between Hudson and Connor and although he tries to fight it, he eventually gives in. He also watches Hudson’s reactions to his suggestions and when he suggests adding one of his men to the mix, the gleam in Hudson’s eye tells him that she would definitely be interested.

Claimed has lived up to all the hype. It has great story telling, world building and characters and lots of steamy, hot sex. Did I mention — Wow!  Grab a copy soon because…you never know.

I try to keep the scenes at least a PG-17 since you never know who might be searching the web. So several of my favorite scenes in this book are not appropriate for sharing so rather than a hot scene between Connor and Hudson, I went with a nice scene between Hudson and the one member of the group who didn’t want Hudson there. Hudson rescued a wolf pup whose mother was killed and stood up to Connor to keep her. The one person who agreed to help her was the one person who barely spoke to her in all the time she was in the camp.

“You’re okay,” she blurted out.

He looked startled by the genuine relief in her voice. “Yeah, I’m fine,” he muttered. “No trouble on the road today.”

She opened the door wider, and he strode inside, a canvas bag slung over his shoulder. “I was only able to get about two gallons, but I think you can start feeding her some mashed-up meat once her teeth come in.”

“They’re already starting to,” Hudson told him, watching as he removed a plastic jug of milk from the bag.

The wolf pup wobbled at their feet, making a squeaky noise that caused Pike’s expression to soften. Then he cleared his throat and reached into the bag again. “I got this too.” He held up a small baby bottle. “Alex and Danielle’s kid is two, so he’s not using it anymore. Hopefully your wolf will take to it.”

Her eyes widened. “Your friends at the farm have a child?”

He nodded, his expression hardening again. “Keep your mouth shut about it. You know what’ll happen to them if your Enforcer buddies find out.”

Hudson bristled, but decided not to touch that Enforcer comment. She was more concerned with making sure her wolf was fed. “I wasn’t planning on saying anything. I was surprised to hear it, that’s all.” She took the bottle from his hand and unscrewed the top. “Thank you for doing this. I owe you one.”

“Yeah. You do.” Pike zipped up the duffel bag. “Fill the bottle and then I’ll stow the milk in the cellar. It’ll go bad if you leave it out in the cabin.”

Nodding, she carefully filled the bottle and secured the top, then bent down to scoop up the wolf. Pike’s gaze lingered on the animal. “She’ll make a good hunting partner if you train her right.”

“Maybe you can help me then,” Hudson hedged.

“Maybe,” he said, his tone noncommittal as he stalked toward the door. “Good night.”

Several seconds passed before he answered. “I had a dog growing up.” He shrugged. “I liked him.”

“Oh.” She absently stroked the wolf’s head as she searched Pike’s unfathomable dark eyes. “What happened to your dog?”

He made a derisive sound. “Winters were a lot colder back then. Food supplies dwindled a lot faster. So we…” With another shrug, he reached for the doorknob.

Her stomach churned. “You what?”

“We ate him,” Pike said flatly, and then he slid out the door.

It took Hudson several hours before she worked up the courage to walk to the stables. It was past midnight by then, but she knew Pike wasn’t sleeping–she felt his gaze on her the moment she entered the main room.

“Are you awake?” she said timidly.

“What do you want?” was his brusque response. She ventured closer, her eyes adjusting to the darkness to make out the pallet in the corner of the massive space. The wolf pup wiggled in her arms, but she didn’t relax her grip. Pike made her so damn nervous, and holding on to the warm bundle was the only way to stop her from fidgeting.

“I made her a little bed on the floor in my cabin,” Hudson began, “but she keeps whining to come up on my bed, and…” She shrugged. “I’m scared I might roll over and crush her if I let her sleep with me, so, um…I figured you have more experience with sleeping with animals, since you had a dog, and…”

Pike slid up into a sitting position and waited for her to continue.

“I don’t want her to whine all night, so…you’d be doing me a big favor if you kept her here with you.”

A harsh laugh slid out. “Don’t patronize me, Hudson. I’m not–” He stopped when he noticed her gaping at him. “What?” he muttered.

“You called me Hudson.” She fought a triumphant smile. “You never call me by my name.”

He harrumphed, which only made her lips twitch harder.

“And I didn’t mean to patronize you,” she added.

“Yeah? Then don’t pretend you can’t take care of a pup when we both know you’re more than capable.” He scowled. “Are you feeling sorry for me? Is that it? You think I need a furry little beast to keep my sorry ass company?”

“No. I think you want a furry little beast to keep your sorry ass company. I just didn’t think you’d have the balls to admit it.”

“Trust me, little girl, I’ve got the balls.” To her surprise, he grudgingly held out his arms. “Bring ‘er here.”

Hudson’s smile broke free, but she masked it quickly by pressing her lips together. She walked toward him and plopped the wolf pup in his arms, and damned if her heart didn’t melt when she watched the wolf snuggle against Pike’s big, muscular chest.

“Does she have a name yet?” he asked gruffly.

“Yes. But you’ll probably hate it.” Hudson beamed at him. “It’s hope.”

Pursing his lips, he gently stroked the wolf’s head. “That’s a pussy-ass name for a wolf.”

One response to “Review: Claimed by Elle Kennedy”