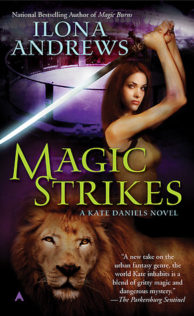 [box style=”rounded” border=”full”]Okay. Okay. Now I see what everyone is going on and on about. Like a kid hiding under the blankets with a flashlight, I snuck this one onto my overburdened TBR list and raced through it. This series definitely needs to be read, not listened to by audiobook![/box]

Kate is contacted by Saiman after he finds Derek breaking into his apartment and trying to steal his tickets to the illegal, gladiator-type fights known as the Midnight Games. Saiman recognizes Derek from the last time Kate visited him with the werewolf in tow. He makes a deal with Kate to release Derek to her and not involve the authorities. The authority being Curran who as Beast Lord would have to punish Derek severely, first for the B&E and secondly because Curran laid down the law the no shifter could attend the Midnight Games — EVER!

Derek is one the few people Kate considers a friend and he is obviously in over his head on something to risk that type of punishment from the Beast Lord, but whatever Derek’s problem, he won’t let Kate help.

But there is one thing she can do. Kate agrees to escort Saiman to the Games for his silence. Saiman not only wants Kate there in his continued attempts to seduce her but also for her abilities as a warrior to assess the combatants. There is a group of fighters calling themselves The Reapers, who are testing as human, but there is no way they could be surviving all these fights against supernaturals without some type of magical or supernatural ability.

Kate knows from first glance that these warriors are not 100 percent human. The one fighter has skin too perfect. No healed cuts, no small scars. And another has an absolutely uniform tattoo covering most of his body. Impossible since he could not have had all that work done at the same time and this fighter also has no flaws in the ink, no scars, no cuts. These fighters couldn’t possibly be human, but how can they possible fool the m-scans and the blood tests?

The winner of the games will win a gemstone unlike any other. When Kate learns that The Reapers are trying to win it so they can carve it down to use to destroy all the shifters, Kate has no choice but to enter the ring herself in order to keep all her friends safe.

THOUGHTS:
There was a huge difference in my enjoyment of the story since I read this novel vs. listening to the audiobook. There is the fact that a lot of this story involves the gladiator-type games which was easier to follow than some of the other story lines. But when we get into the why and the what-the-hell-are-those and what’s with the flying castle which all involve Hindu legends, it was a lot easier to absorb the details while reading.

Who doesn’t enjoy the tension between Curran and Kate, although I will complain that it was a very quick change of mind from Curran calling Kate his personal nightmare to wanting her as his mate but who can argue since I like their chemistry. I have also been enjoying the quick Curran POV shorts that you can get free on the Ilona Andrews website. Especially the Hot Tub scene from Curran’s POV.

This is a very interesting Urban Fantasy series, with great world building and interesting characters, but you have to give the story your full attention if you want to understand it.

Andrea stirred her milk shake with a spoon. “So, how are things with you and Curran?”

There were times in my life when I wished for supreme mental powers. Like telekinesis. Mostly, I wanted them to crush my opponents. But right now I wanted them so I could pull the chair out from under Andrea and make her fall on her butt.

I settled for spitting three times over my left shoulder.

“Are you warding off evil?” Raphael’s eyes widened.

“Well, the two of you did say the forbidden name. I have to take precautions. I need something wooden. Lean forward Andrea so I can knock on your head.”

“To answer your question, we’re great. Never better. I haven’t seen His Fussiness in two months, and I couldn’t be happier. If my luck holds, he’s lost interest and found himself somebody else to hound for his amusement.”

During the flare Curran had finally found a way to pay me back for all those times I’d nearly brought him to apoplexy. He had told me I would sleep with him sooner or later and thank him for his services in bed.

“He hasn’t found anyone, as far as I know,” Raphael said. “Nobody has seen him with a woman since the flare. That’s not terribly unusual for him but it’s not common either.”

I rolled my eyes. “And that means what?”

Raphael leaned forward and lowered his voice. “Have you ever seen a lion hunt a herd?”

“They are very single-minded. When a lion stalks a herd, he sneaks in close, lies down, and surveys them to choose his victim. He takes his time. The deer or buffalo have no idea he’s near. He finds his prey and then he explodes from his hiding place and grabs it. Even if another, perfectly serviceable animal ends up within his reach he isn’t going to alter his course. He has chosen, and he would rather go hungry than change his mind. A dumb way to live, if you ask me, but that’s their nature. Me, I don’t ignore opportunities.”

Raphael gave her a hurt look. “I am what I am.”

“You’re a man first. You sit here in a human shape, wearing human clothes, making human noises. Pretty obvious which part of you is in control. But when someone points out your excesses, you wave your hands around and start crying, ‘Oh no, it’s the beast! I can’t help it!'” Andrea caught herself and clamped her mouth shut.

I did my best to change the subject. “I think you give our relationship too much credit. I irritate the hell out of Curran and he found a way to pester me. It’s nothing.”

“His Majesty needs a can-I girl anyway. And I’m not it.”

It dawned on me that Raphael was sitting very still. Frozen, like a statue, his gaze fixed on the point above my head.

“Technically it should be ‘may I'” Curran said, his voice deeper than I remembered. “Since you’re asking permission.”

He stepped into my view, reached for a chair at a table next to us, and found it bolted to the floor. He gripped the chair and plucked it from the concrete with one hand, leaving four screws sticking out of the floor. He put the chair next to me, back first, and saddled it like a horse, crossing his arms on the top of the back to show off carved biceps.

“To answer your question, yes, you may kiss my ass.  Normally I prefer to maintain my personal space, but you’re a Friend of the Pack and your services have proven useful once or twice. I strive to accommodate the wishes of persons friendly to my people. My only question is, would your kissing my ass be obedience, grooming or foreplay?”

Raphael went a shade paler and bowed his head. “By your leave, m’lord.”

Raphael grabbed Andrea by the hand.

“We have to go now.” Raphael’s smile had a bit of an edge to it. He fled and dragged Andrea with him, leaving me and Curran alone. Traitors.

“You didn’t answer my question,” Curran said. “What will it be?”

Curran grinned and my heart made a little jump. I didn’t expect that.

“That’s it? That’s your witty comeback?”

“Yep.” Eloquence ‘R’ Us. When in trouble, keep it monosyllabic–safer that way.