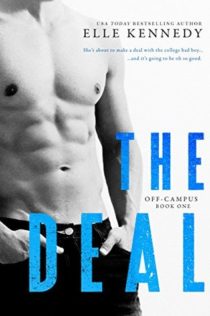 The Deal (Off-Campus, #1) by Elle Kennedy

[box style=”rounded” border=”full”]This book was recommended to me and as a fan of Elle Kennedy’s Killer Instinct series, I was happy to give it a try.  It was an enjoyable new adult story, but it took me awhile to come to like these characters.   This is not my favorite new adult book but still much better than many of the standard tropes on the new adult shelf.  [/box]

This novel combines two new adult tropes, the rape survivor and the college sports star. I was not enamored with Hannah and Garrett at the beginning of the story. Both were a little full of their own importance. Hannah can’t be bothered to tutor the popular jock and Garrett takes advantage of his popularity and is a bit obnoxious with the line up of girls he sleeps with and tosses aside.  He and his housemates/team mates should install a revolving door to make things easier.

Hannah doesn’t register in Garrett’s world until he is about to fail a class and then he will have to sit out the remainder of the hockey season. He then pulls out all the stops to get Hannah to agree to work with him so he can pass the make up test.

Naturally, once Garrett takes a second look at Hannah, he can see that she is actually attractive. Yet, even though he is developing an interest in Hannah, it doesn’t stop her from walking in on Garrett having sex with some nameless ‘puck bunny.’ That to me it a bit of a turn off in a romance. I prefer that my hero isn’t still having meaningless sex with strangers once he turns his eye on the heroine. But, that’s just my preference.

It is after they have been working together for awhile that a friendship started to grow between them.   It is once Hannah and Garrett start to become friends, and we start to learn more about their characters, that I start to like them both more and start enjoying the story.

We learn about Garrett’s abuse under the thumb of his NHL superstar father.   His father physically abused his mother and then Garrett after his mother’s death.  All the while, signing autographs and being adored by the fans who are not aware that at home he is a violent tyrant.  It is torturous to Garrett that even his team mates worship his father and lament how lucky Garrett is to have a superstar father.

We also learn that Hannah was ruffied at a party when she was 15 and raped by a hometown high school hero. After years of therapy, she has moved on. She has had lovers since the rape, but indicates she hasn’t orgasmed during sex. When Hannah originally agrees to “The Deal” to help Garrett, it is because she wants to date the newest member of the baseball team who comes off as smart and not the horn-dog that the other jocks are. Garrett knows this is a ruse on Kohl’s part, but he needs to get Hannah to agree to tutor him so Garrett’s plan is for Garrett and Hannah to pretend to date, which will make Kohl finally notice Hannah.

Once Hannah and Garrett become friends, Hannah asks the very experienced Garrett to help her try to orgasm so that when she and Kohl eventually date and have sex, she will not be a disappointment to him. What cements Garrett as a hero to me is not the fact that he agrees to have sex with Hannah, but that he goes online and researches how he should approach sex with a rape victim, and he talks to some people about how he should handle the situation instead of just using his ‘expertise’ to make sex good for her.  He makes sure that he approaches the whole thing slowly and patiently so that Hannah will not be harmed by something he does.

I ended the story enjoying the couple that Hannah and Garrett had become and how they have helped and supported each other.  Their relationship helps them mature greatly in the short period they are together.

Elle Kennedy does have an easy writing style which makes the story fly by and there are no slow parts.

What did surprise me at the end is that although Garrett infers that Kohl is playing up the smart, thoughtful jock, he finishes the story as just a nice guy that Hannah didn’t pick.   It seemed more like halfway through writing the story, Elle decided she liked him and wanted to keep him for a hero in a future story since there were already enough antagonists here.

We settle on the bed to eat, neither of us speaking as I turn the show back on. The pilot episode is amazing, and Hannah doesn’t object when I click on the next one.

There’s a female in my bedroom and neither of us is naked. It’s strange. But kinda nice. We don’t talk much during the show–we’re too engrossed by what’s happening on screen–but once the second episode ends, Hannah turns to me and gapes.

“Oh my God, imagine not knowing that your husband is cooking meth? Poor Skylar.”

“She’s definitely going to find out.”

She picks up her Coke can and takes a deep swig. I’ve already demolished my pizza, but Hannah’s is only half done, so I steal a piece and take a big bite.

“It’s not my fault you eat like a bird, Wellsy. I can’t let food go to waste.”

“I had four slices!”

I have to concede, “Yeah, that actually makes you a total pig compared to the girls I know. The most they ever eat is half a starter salad.”

“That’s because they need to stay rail-thin so guys like you will find them attractive.”

“There’s nothing attractive about a woman who’s all skin and bones.”

“Uh-huh, I’m sure you’re so turned off by skinny women.”

I roll my eyes. “No. I’m just saying I prefer ’em curvy.” I swallow my last bite before reaching for another slice. “A man likes having something to grab onto when he’s…you know.” I arch my eyebrows at her. “It goes both ways, though. I mean, wouldn’t you rather sleep with a guy who’s built over one who’s a twig?”

She snorts. “Is this the part where I compliment you on your super hot bod?”

“No, you think you’re super hot.” She purses her lips. “But I suppose you have a point. I’m not attracted to scrawny guys.”

“Then I guess it’s a good thing Loverboy is shredded like lettuce, huh?”

She sighs. “Would you stop calling him that?”

“Nope.” I chew thoughtfully. “I’ll be honest. I don’t know what you see in him.”

“Why, because he’s not Mr. Big Man on Campus? Because he’s serious and smart and not a raging manwhore?”

Shit, I guess she’s bought into Kohl’s act. If I had a hat, I’d probably tip it off to the guy for successfully creating a persona that drives women wild–the nerd athlete.

“Kohl isn’t what he seems,” I say roughly. “I know he comes off as the smart, mysterious jock, but there’s something…slimy about him.”

“I don’t think he’s slimy at all,” she objects.

“Right, because you’ve had a plethora of deep, meaningful conversations with him,” I crack. “Trust me, he’s putting on a show.”

“Agree to disagree.” She smirks. “Besides, you’re in no position to judge who I’m interested in. From what I hear, you only date airheads.”

I smirk right back. “You’re wrong.”

“Yup. I only sleep with airheads. I don’t date.”

“Slut.” She pauses, curiosity etching into her face. “How come you don’t date? I’m sure every girl at this college would kill to be your girlfriend.”

“I’m not looking for a relationship.”

That perplexes her. “Why not? Relationships can be really fulfilling.”

“I’m single because I haven’t found anyone I connect with, not because I’m anti-relationship. It’s nice having someone to spend time with. You know, talking, cuddling, all that mushy stuff. Don’t you want that?”

“Eventually. But not right now.” I flash a cocky grin. “If I ever feel the need to talk to someone, I’ve got you.”

“So your airheads get the sex, and I’m the one who had to listen to you babble?” She shakes her head. “I feel like I’m getting the short end of that deal.”

I wiggle my eyebrows. “Aw, you want the sex too, Wellsy? I’m happy to give it to you.”

Her cheeks turn the brightest shade of red I’ve ever seen, and I burst out laughing.

“Relax. I’m just kidding. I’m not stupid enough to bone my tutor. I’ll end up breaking your heart, and then you’ll feed me false information, and I’ll fail the midterm.”

I flip up my middle finger, but I’m grinning as I do it. “You taking off now or should I put on Episode 3?”

We get comfortable on the bed again, me on my back with my head on three pillows, Hannah on her stomach at the foot of the bed. The next episode is intense, and once it’s done, we’re both eager to watch the next one. Before I know it, we’re done with the first disc and moving on to the second. In between cliffhangers, we discuss what we’ve just seen and make predictions, and honestly? I haven’t had this much platonic fun with a girl in…well, ever.