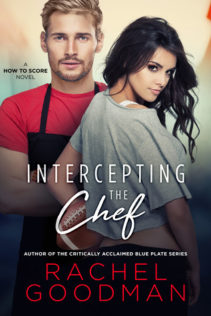 Intercepting the Chef (How to Score, #1) by Rachel Goodman

Gwen Lalonde is a rising star in the eyes of the elite restaurateurs of the world. But when her celebrity chef boss and now ex-boyfriend fires her, she finds herself playing a different game. Forced to flee San Francisco and return home to Denver, Gwen lands a spot as the executive chef at Stonestreet’s, a new restaurant owned by NFL golden boy and Colorado Blizzards quarterback Logan Stonestreet. When Logan starts pursuing Gwen romantically, she pulls a classic duck and weave and avoids any advances by throwing herself into reestablishing her reputation in Denver.

But Logan Stonestreet is persistent—he didn’t become one of the best football players in the league by throwing in the towel at the first rejection. Something about Logan’s unwavering determination—and amazing body—keeps Gwen around, and soon there’s more that’s sizzling than just the steak on the grill. Things are getting more serious than either side cares to admit, and when Logan suffers a severe injury in the playoffs, they’re both forced to make game-time decisions.

I had a hard time connecting with these characters. The story was okay, but there was nothing exceptional to it. This is the first of a new series but other than Gwen’s brother, Chris, there no other stand out secondary character who caught my interest.

Chef Gwen Lalonde thought that she was helping her boss/boyfriend when she earned the prestigious three star rating in the Michelin Guide. He was busy trying to become the next Food Network star leaving Gwen to run the place in his stead. He feel his restaurant earning this award in his absence is a betrayal on her part and he throws her out and slanders her good name. Knowing she will not get another job in San Francisco, where she made her home wit Stephen, Gwen runs home to lick her wounds and try to figure out what to do next.

In Boulder, Colorado, childhood friend and quarterback of the Colorado Blizzard is opening a steakhouse in honor of his mother and featuring all his mother’s favorite recipes. Logan offers the position of head chef to Gwen, even knowing that it is below her talent, but wanting to help her in her time of need.

Gwen feels like working at the steakhouse is like hitting rock bottom and finally gets Logan to agree to allow her to offer a menu of daily specials allowing her to be creative and giving her some control over the kitchen.

While Gwen is struggling to regain her chef’s dignity, Logan is fighting to stay in football just one more year. He fights the pain in this bad knee but this years the Blizzards just might make it to the Superbowl. If he can just keep from injuring himself any further, he may finally have a chance to earn a Superbowl ring.

I was not enamored with this story at all. Gwen was a hard woman to like. She had a definite chip on her shoulder. She also goes quickly from her lost love of the San Francisco chef to being in love with Logan.

Both Logan’s Agent and his father were nasty to him and indicating the Logan shouldn’t waste his focus on the steakhouse nor on Gwen since he needs to be completely focused on winning a Superbowl. Logan seemed to have no problem managing all those aspects of his life and that just made them jerks. Logan can’t get rid of his Dad, but he could have fired the agent.

Gwen gives Logan just as much of a hard time about playing injured like she never heard of sports stars having to do whatever they needed to to win. Her brother was a teammate of Logan’s. This should not have been news to her.

I just never felt the chemistry with these two, nor did I find anything that interesting about the secondary characters which would draw me back for the next story. The story itself was just meh.

Review: The Hook Up by Kristen Callihan
« Review: Live Out Loud by Marie Meyer
Review: After the End by Katie Ruggle »

3 responses to “Review: Intercepting the Chef by Rachel Goodman”