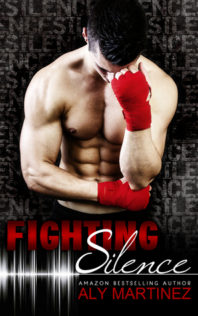 Fighting Silence (On the Ropes, #1) by Aly Martinez

[box style=”rounded” border=”full”]I was asked to be part of the blog tour for Book 2, Fighting Shadows, and the story intrigued me so I agreed. When I looked into the series, I just had to start with Book 1, Fighting Silence. I was overwhelmed by the story of love and family, and their struggle to keep this family together.[/box]

Till Page met Eliza Reynolds the night he climbed through the abandoned apartment window and found it was already occupied. Till was just looking for someplace to hide from the harsh reality of his life and he found a fantasy world where he could just be. Eliza was also escaping her reality by coming to the apartment where she set up a lamp and some cushions so she could be alone and draw.   Each night from the time that they were 13 until they graduated from high school, Till and Eliza would be sneak out of their homes and just spend their evenings together where no one hurt them or demand things of them. They did homework or simply spent time with someone who actually cared about them.

It was after high school that Till knew he needed to face reality. Eliza had graduated and was going to college. Till had been working two jobs to make up the rent money for his deadbeat parents. He hadn’t had enough credits to even graduate high school. He needed to face reality and give up the reality world where he lived with Eliza.  He walked away from her, leaving her devastated.

When Till is betrayed by his own father, he tries to literally climb back into the window of his fantasy world…or more to the point, through Eliza’s window.  Eliza is done with fantasy and wants to face the real world with Till, side by side and until he is ready to do that, she has locked her window to him.

Till wants the peace that being with Eliza brings him but he doesn’t want to sully that with the reality of his working too many jobs which barely pays the rent and the harsher reality that he is going to lose his hearing.  Till has to decide if he can let go of his fantasy world and claim Eliza as his in reality and begin a new future that might not be bright, but they will be there together.

THOUGHTS:
I just loved these characters. I was drawn into their struggles, from Eliza and Till’s neglectful parents to their hard work to provide basic necessities for themselves and Till’s younger brothers.

Although Till seems a bit delusional in his absolute need to crawl through Eliza’s window, rather than using a door, you really can understand it because being with Eliza is pretty much the only break he gets from the harshness of life. She makes him twice-baked potatoes and after endless meals of Ramen noodles, this is like manna from Heaven to him.

You also understand Eliza’s frustration. She wants to be part of the reality of Till’s life, to be with him and stand beside him. He and his brothers are her entire world and if she forces Till out of his fantasy and demand he accept her as part of his reality, she risks losing him and his brothers as well. These men are part of the family she made but in order to get more from Till, she has to risk losing everything.

Just when we start seeing a brighter future for them, Till’s hearing loss hits rock bottom and he has a serious and life changing choice to make. He can either stay deaf and accept his fate or he can get a cochlear implant and hear again. If he gets the implant, he can’t fight anymore and will lose the only chance he has to provide for a real future for Eliza and the boys.

This story just drew me in and I am glad I already have a copy of Fighting Shadows rather than having to wait to see what happens, except there is no audiobook version of that one yet so I have to figure out how to squeeze it onto my bursting TBR list. 🙁

I bit my lip and turned to Till, who had his hands planted on his hips. Because I’d been fully expecting him to be pissed at Quarry, I was surprised to see that his shitty attitude was aimed at me.

His shoulders flexed as he cracked his neck. “I don’t want you talking to him anymore.”

“And here we go,” Slate mumbled from across the room.

“Derrick. I don’t like him, and I sure as shit don’t want you anywhere near him.” He narrowed his eyes at me, taking me aback by this sudden attitude.

It was unusual for Till to be an ass to me, but it wasn’t exactly an anomaly. I knew exactly how to handle him.

I very calmly pasted on a patronizing smile. “Well, I didn’t know that, Till. Perhaps it would be easier if you made me a list of who I’m allowed to talk to,” I said condescendingly as I dug into my purse and pulled out a sketchpad. Dramatically, I licked the end of the pencil before poising it over the paper. “Or wait. A leash might be better for full control over who I’m near. I’m sure we could temporarily rig one up with a jump rope or something. Please just let me know what works best for you.” I popped an eyebrow and crossed my arms over my chest.

“Well, that could have gone better,” Quarry told Slade as they started laughing behind me.

“Don’t give me that shit, Doodle. I don’t like him. He’s a self-centered, arrogant prick.”

“Oh, well, you should have just said that, then. I already have one of those. I don’t need another,” I smarted off.

“Burn!” Quarry whispered, but neither Till nor I shifted our focus.

“Seriously?” He crossed his arms to match mine.

“I don’t know. You tell me. Are you serious with this crap?”

He sucked in a breath through his nose. It was angry going in, but he held it until he released it on a resigned sigh. “Look. I have never once asked you not to hang out with someone. Never. You make your own decision about guys, and no matter how big a douchebag they are, I keep my mouth shut. But I can’t bite my tongue here. I do not like that guy. It makes my skin crawl that you are even on his radar. We’re family, right?  Well, family watches out for each other. So, Doodle, I’m asking you. Please. Stay. Away. From Derrick.”

I held my attitude for a few seconds longer, but it wasn’t because I was still mad. Rather, if I spoke, I knew I’d start crying.

There was no way he could truly understand the depths of what those words meant to me. I swallowed hard, trying to force the emotions back, and for once, I actually succeeded.

His head snapped back as if I had slapped him. “Um…okay?”

“Yeah. Okay. If you had started with that explanation instead of being bossy, this conversation could have been a whole lot shorter. I get it. You don’t like him. I’ll steer clear.”

Till smiled, and it reflected on my own lips.

“Besides I’m in a very committed relationship with Justin Timberlake right now.”

“Good. Keep it that way.” He cupped the back of my neck and pulled me up against his chest.

I wrapped my arms around his waist and held him as his hand slid up and down my back.

Till and I both knew we had a strange relationship. It was more than a friendship, but there wasn’t romance or sex. There was definitely love though. Immeasurable amounts of it. I knew that Till had this grand fantasy about me. But what he didn’t realize was all that he gave me in return. He was the only thing I’d ever had that I honestly thought I couldn’t live without. Till Page was my soulmate on every level. I’d accepted that it didn’t have to be sexual between us. Truth be told, I’d have been happy to sit in an empty room for the rest of my life as long as he was sitting beside me.

But it was moments like those, when his arms were protectively folded around me, and his heart beat a strong rhythm in my ear, that made me want more. 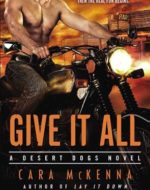