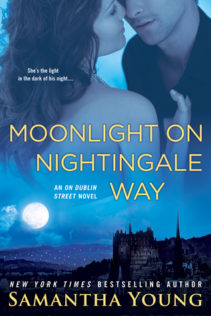 Moonlight on Nightingale Way (On Dublin Street, #6) by Samantha Young

[box style=”rounded” border=”full”]Moonlight is the last in the On Dublin Street series. As a final story, it was a wonderful tale of Shannon’s brother, Logan MacLeod, recently released from prison. Logan went to jail for beating up Shannon’s ex-friend after he attacked Shannon.  We know what a good man he is for what he has done to support Shannon over the years, but two years in prison has Logan doubting his self-worth. It is new neighbor Grace who helps remind Logan what a good man he truly is.[/box]

Moonlight on Nightingale Way started just like Alice Clayton’s Wallbanger.  Thin walls make for angry neighbors. Grace is kept up all night with her next door neighbor’s all-night sexcapades.  Grace finally confronts her neighbor, Logan, about his recent conquest leaving her knickers to dry on their landing banister, and we have a prejudices growing from our initial introduction. Grace sees Logan as an annoying man-whore and Logan see her as a judgment prude. From here, the story goes its separate way from Wallbanger.

After several non-friendly confrontations between the two, Grace is approached by a nosy-body neighbor who shares the information that Logan is an ex-con and that no one is safe in the building. Regardless of their personal confrontations, Grace staunchly backs Logan against the neighbor unaware that Logan and Shannon have overheard this disclosure. This becomes a turning point in their relationship.

When Logan is confronted by a young girl declaring herself to be Logan’s daughter, it is Grace who steps up as the voice of reason to help Logan and young Maia negotiate this giant change in both their lives. It has been a long time for Logan since he has felt worthy of anyone’s kindness, and he can’t imagine that someone as giving and selfless as Grace actually exists let alone would help someone with his past.

Almost overnight, Grace and Logan’s relationship changes from adversaries to friends. The addition of Maia creates almost a family dynamic between the three of them which complicates things further. Maia and Grace are bonding which each other as well as Logan and neither are prepared when they find out that Logan is still pursuing outside activities.  Even after all the wonderful changes in his life, Logan still harbors the deep belief that he is unworthy of all the good that has come his way.  Like a self-fulfilling prophecy, Logan is destroying the relationships that he so desperately wants because he still feels undeserving.

After doing everything possible to keep Grace in the friend-zone and squashing any idea of romantic ideas that Grace and Maia are harboring, Logan realizes that in protecting himself, he is pushing Grace towards other men and the idea of her walking out of his and Maia’s lives is equally distressing.  While Logan might have finally come to his senses, the damage has been done and it might be too late for him to change his mind and grab for his happily ever after with his beautiful, frustrating neighbor.

Logan will have to work hard to convince himself and Grace that he deserves another opportunity to create the family he actually deserves.

THOUGHTS:
I have read several end of series stories that have left me waving good-bye and feeling that I’ve had enough. I will truly be sorry to walk away from this series.  I enjoyed the characters presented here and although the time jump in Fall from India Place seemed awkward at first, it also allowed us to have a good look at what comes after the HEA. As the series continued, our original couples, Joss & Braden, Adam & Ellie, Jo & Cam and Nate & Olivia, all had their own families and we got a taste of their ups and downs through the years. It is not often that we get to enjoy a series and see that HEA’s actually continue past the epilogue.

Logan was a great selection for the ending of the series. We met Logan briefly in Echoes of Scotland Street, where we learn how Logan went to prison for avenging his sister Shannon after she was beaten up by her boyfriend. After two years trying to survive in prison, he only saw himself as damaged and unworthy. Shannon comments that until Grace, Shannon hadn’t seen Logan smile or laugh since before he went in. Logan admits that from the moment he saw how beautiful Grace was, he desired her, but after seeing how warm and kind she was, he no longer felt worthy of her.

I love my damaged heroes but in this case, Logan was his own worst enemy. Instead of simply appreciating the affection of a woman who he felt unworthy of, Logan did everything he could to destroy it.

It was a great story and sadly the ending of a wonderful series.

“I don’t know if you realize this, Logan,” I snapped as I jerked open my buttons. “But I don’t actually have to tell you anything about my life.” I threw my coat at the stool that sat in the corner of the room and turned back for my glass.

The silence from Logan made me look at him.

His gaze was on my body, and I couldn’t quite work out what the sudden darkness in his eyes meant.

I glanced down at my dress. It symbolized all the hope I had been feeling about tonight and Colin, because it was the sexiest thing I had in my wardrobe, and I didn’t wear it for just anyone. It was a black satin calf length dress that fitted me like a second skin. It had thin straps and a sweetheart neckline that revealed more cleavage than any of my other dresses. I was wearing a sexy push-up bra that did wonderful things to my modest cleavage.

I’d pinned my hair up to show the dress of at its best.

Although it was far less revealing than the clothes I’d seen Logan’s women wearing, I suddenly felt quite exposed with him looking at me like that.

I blushed and took a swig of wine.

“Was he worth it?” He gestured to my dress with a look of angry distaste in his eyes.

My own temper rose in answer. “There’s nothing wrong with my dress.”

“Well, he could be in no doubt what you were offering when you turned up in it. So what the hell happened? Or was it the true definition of a quickie?”

I sucked in my breath, hurt. “Get out of my kitchen.”

He marched around the counter toward me. “Not before you tell me what that bastard did to you.”

“It’s none of your business. For the fifteen hundredth time.”

“I beg to fucking differ.” He stopped inches from me, towering over me, deliberately trying to intimidate me into answering.

I Looked up at him, trying to shoot sparks at him with my eyes. “You’re being ridiculous. I am not your sister!”

Logan jerked back as if I’d hit him, surprise rounding his eyes. After a minute he said hoarsely, “Believe me, I know you are not my sister.”

What did that mean? I shivered under the heat of his regard and felt gooseflesh rise on the upper curves of my breasts. My nipples tightened against my bra. Trembling a little now, I skirted around him, putting some distance between us.

“I just want to know if he hurt you,” Logan said, no longer sounding angry.

“No, he didn’t.” I finished off my wine and turned, but I braced myself against the wall, unable to hold myself up against the confusion I felt.

I looked up at Logan from under my lashes. He’d turned to face me, but every muscle in his body seemed to be stretched taut. “No, he didn’t,” I repeated quietly. “But he was only after one thing.”

The muscle in his jaw ticked. “What did you do?”

“I told him I didn’t do one-night stands because when I went to bed with a man I wanted him to do whatever he wanted to me, and for that I needed to know and trust him.”

Logan’s face went blank. “You said that?” he asked flatly.

“I was being funny.” I shrugged, suddenly not feeling so funny anymore.

“Aye, well, I’d expect a phone call from him tomorrow. Saying shit like that to him, wearing that fucking dress…” He was angry again.

And like always, his anger ignited mine. “Why are you acting like a complete sod to me tonight?”

“Are you really that fucking clueless?” Logan shouted, wearing a look of disbelief.

“Apparently so!” I shouted back.

I barely had time to blink at his yell before his body was pressing mine hard into the wall. He captured my wrists in his hands and pinned them, holding me completely captive. Breathing heavy, his face but an inch from mine, he stared down into my eyes and said hoarsely, “Tell me to get out, Grace.”

My skin was flushed, in fact, my whole body felt like flames were licking at every inch of it. I could feel my breasts swell up against the tight confines of my dress, and the tingling between my legs had increased to an insistent throb. I breathed Logan in, my breath hitching as I felt his erection. There was a pleasant flip in my lower belly, and I squeezed my legs tighter together at the rush of slickness between them.

“Grace.” His head dipped toward mine. “Tell me to leave.”

“No,” I whispered back, relaxing into the wall, and he melted into me with a groan. “I want you to stay.”