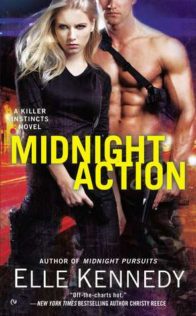 [box style=”rounded” border=”full”]This series has taken over the Maya Banks KGI series as my favorite Action Romance. I was looking forward to this book in particular since Morgan and Noelle have such a volatile relationship that I had to know the history behind it. Great action, sad background.  [/box]

James Morgan met the most beautiful girl he ever laid eyes on on his first solo mission. Getting information about the whereabouts of Douglas Phillips from his 17 year old daughter, Noelle, was Jim’s mission. Her father was selling secrets and it was Jim’s job to bring him in.   He was only supposed to earn her trust and get information about her father.  The feelings that were growing between them were not part of the plan.  That’s why when Jim’s team caught Douglas Phillips and Jim walked away from Noelle, and he never expected to see her again.

His betrayal set Noelle on her current path.  The French Government recruited her and trained Noelle to become an assassin.

Two years later, Noelle stumbled across James Morgan once again seducing a young woman for information about her father. Noelle wouldn’t allow Jim to tear another father from his daughter and she tipped off the girl. Noelle’s interference did more than just ruin Jim’s mission.  Agents went in too early and several died.  It also began a war between two very strong and deadly opponents which is still going on 19 years later.

So you would think that Noelle would be delighted to receive a call offering her $5 million to kill the man who has been the bane of her existence. But being Noelle, she doesn’t appreciate being told what to do by some unknown source, or at least that’s what she tells herself.

If actions speak louder than words, Noelle’s action indicate quite loudly that there is more emotions than just hate between her and Jim Morgan. Noelle heads off to Jim’s new headquarters to warn him of the contract rather than picking up the phone. Her message once delivered she could walk away, but somehow she allows Jim to come with her on her private plane to Paris to track down the client. She tells him to get out of her house, but when he simply won’t, she doesn’t do anything for force him out.   For someone who hates Jim so much, not only hasn’t she killed him to collect a hell of a lot of money, something which she has told everyone was her lifelong goal and what she wanted most in the world, but she is, somewhat passively/aggressively, helping Jim to find the man will to pay $5 million for his death.

Noelle and Jim set off sparks whenever they are in the same 100 yard area and in Midnight Action, they have the hottest hate-sex imaginable. The saying is that there is a thin line between love and hate, but in this case, these two have smeared that line until you can’t tell one emotion from the other.

The emotions and sex between them are complicated enough, but becomes even more so when the parties from that fateful case seventeen years ago cross into this one, ripping open the already festering wounds between Noelle and Jim.

The action in this story blends with flashbacks of the past, and mix with an already volatile roller coaster of emotions to make for an exciting and intriguing story.

Even though several characters reappear from prior novels, you can read this as a stand alone, but I have no doubt once you’ve had a taste, you will be going back to read the prior four stories in the series.

Warning: This scene is pretty hot.

Their dance might have seemed innocent to the people around them, but each brush of their bodies heightened her arousal. Each time his palm grazed her tailbone, her skin sizzled. Each time his cheek brushed hers, her breathing grew more labored.

Still, no matter what Jim thought, she was a pro, and thus perfectly capable of suppressing her desire.

Of course, that didn’t mean she had to stop testing his ability to remain professional.

With a mischievous smile, she looked into his eyes and said, “By the way, the shower blow job you mentioned before? I orgasmed the second I swallowed that first drop.”

A strangled growl left his mouth.

And suddenly they weren’t dancing anymore. But still moving. Moving very, very fast, in fact, as Jim dragged her toward the staircase on the other side of the ballroom.

Morgan had no idea where he was going or what he was thinking. He ignored the inquisitive eyes boring into his back as he gripped Noelle’s hand and led her up the spiral staircase. He didn’t know where it led, or where they’d end up— all he knew was that if he didn’t get inside this woman right fucking now, he was going to pass out.

She didn’t finish and he didn’t care. His lower body was aching, his cock so stiff he could barely walk. He was a man on a mission, his gaze focused straight ahead like a missile homing in on a target.

At the top of the stairs was a small landing opening into a wide hallway with half a dozen doors, but the red velvet curtain to their left was what caught his eye. Gripping Noelle’s forearm, he pushed open the thick velvet and immediately liked what he saw— a shadowy space the size of an opera box. No, it was an opera box, Morgan noted when he spotted the curved railing at the edge and the row of plush, red-upholstered seats.

He turned to Noelle. “Come here,” he ordered.

She stayed put. “I don’t take orders from cavemen, thank you very much.”

His gaze swept over her. He’d lied before. He was totally digging the dress. And the hairdo. The shoes. The vixen-red lipstick. Christ, he wanted to kiss those fuck-me lips more than he wanted his next breath.

Just like that, his control snapped like a bungee cord. Forget breathing— his brain stopped working right along with his lungs, his vision nothing but a thick haze of lust as he grabbed her by the arm and yanked her toward the railing. He spun her around so she was against it, then moved in behind her and ground his aching groin over her ass.

Noelle’s moan cut the air, soft enough that he doubted anyone down below had heard it. And if they did, he didn’t give a fuck. He’d turned into an animal, a desperate, hungry animal with one thought on his mind.

He scrunched up her dress and shoved the material all the way up to her waist. She was still covered in the front, but naked from the lower back down, and when he glimpsed her bare ass, a groan left his lips.

“Oh Jesus.” He stroked her tight buttocks with his palm, then undid the button of his trousers.

Letting out a ragged breath, he reached inside his boxer-briefs and pulled out his granite-hard cock. With Noelle in front of him, he wasn’t worried about anyone catching a glimpse of the little soldier, but there was nothing shielding her. If anyone in the ballroom so much as craned their neck, they’d get a hell of an eyeful: Noelle bent over the railing, fingers curled over the cool steel, cleavage spilling out of her dress.

Cursing softly, he wrapped his arms around her and drew her backward, repositioning them so they were against the wall, several feet back and out of view of any guests.

The second he rubbed the head of his cock along the crease of her ass cheeks, she gasped in pleasure. “Oh God. Please.”

The quiet plea was enough to make him shudder.

Holding her dress up with one hand, he gripped her hip with the other and drove into her from behind.

It felt so criminally good he literally saw stars. Heat and moisture surrounded his erection, her inner muscles clamping around him like a hot, pulsing glove. The sexual excitement burning in his blood was stronger than any burst of desire he’d ever felt in his life.

But no, that wasn’t true. He’d experienced this same blast of need before. Earlier today, when he’d been balls deep in Noelle. Nineteen years ago, when he’d been buried inside the most beautiful girl in the world.

It was her. It was always her.

Review: Twisted Truths by Rebecca Zanetti
« Review: I Saw Her Standing There by Marie Force
Review: Caged in Winter by Brighton Walsh »