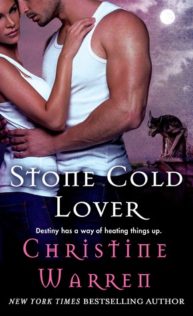 Stone Cold Lover had a much more interesting story plot than the first book in the series, Heart of Stone, but so far the overall series plotline isn’t exciting enough to warrant my going out of the way to follow it. I didn’t grab a copy of this book until I was asked to do a First Look for Heroes&Heartbreakers. I am certain there will be big epic battle at the end of the series after all of the guardians are awoken, but seven semi-interesting stories to get to one epic battle is more of a commitment than I want to make on this series.

Felicity Shaltis thinks she is just doing a favor for her college friend, Ella Harrow. She doesn’t realize yet how looking for a gargoyle statute is going to change her life forever.

Fil can’t blame her new obsession with the unbelievably hot statue on Ella either. Ella just asked Fil to find the statue, not to have a burning need to touch it and she certainly didn’t ask Fil to break in to the monastery in the middle of the night so she can see it again. Maybe if she gets arrested for the B&E she they’ll get her some therapy for her crazy behavior. But Fil isn’t the only one creeping around in the dark. The nocturnis have also found the Guardian and plan to blow up the statue while the Guardian is helpless.

While protecting the statue (by hiding behind it) Fil is hit by a bolt of magic from the creep in robe just before the Guardian is roused from his slumber and creepy nocturnis guy blows himself up. The next question is who is more confused Fil looking at the gorgeous, half-naked man that used to be a statue or Spar who is suddenly out of his slumber with no Warden around to wake him.

Using her iphone, Fil gets Ella on facetime who explains to Fil and Spar about what she and Kees have learned so far about the missing Guardians, Wardens and the nocturnis’s evil plot to destroy the sleeping Guardians so evil can win. I find it ironic that a guy named Spar has a problem with the name Fil. His feeling is Fil isn’t feminine enough, but the last time Spar was awake Gertrude, Agnes and Winifred were the popular girl names. No offense meant Gertrude, Agnes and Winifred! I’m just saying it was an odd thing for him to be so upset about.  Dude, your name is Spar. Don’t judge.

Fil and Spar take up the task of finding Wardens in hiding on their side of Canada.   Once they find one, they just missed him (he saw them coming) but he leaves a present of information that directs them toward their next task and the next missing Guardian.

They are also trying to locate a witch or someone with enough magic to help remove the spell put on Fil by Creepy Nocturnis Guy who apparently put the equivalent of a GPS cow brand on Fil marking her as dinner for one of the demons when it arises.

THOUGHTS:
The marking of Fil which attracts all the bad guys added more of an interest to this plot, but overall I haven’t  found enough romance or interesting plots in the first two books to be all that exciting a series. If we have to wake all seven Guardians by using the same plot of women who all have just enough of a magic to do it without actually being a Warden and who will all be the great love of the Guardian’s long, long life, before we can do more than just drive around looking for Wardens in hiding, then I’m out!

“Spar, my getting hurt wasn’t your fault,” she told him after a minute of uncomfortable silence. “You realize that, right? I mean, you can’t keep your eyes on me twenty-four seven, no matter what you feel your duty is. I just went into another room. You were only a few steps away, and when I got hurt, you were right there to keep it from being any worse. You didn’t do anything wrong.”

He grunted and reached for her left hand. “I have done nothing right from the moment I awoke. If I had, this would not be here.”

He traced a finger over her palm, following the lines of the demon’s mark. Fil followed his gaze and choked on a gasp. The reddened henna-like lines of the mark had darkened again, now appearing a dark, dark brown, almost black, with a charred look on the outer edges. It no longer pained her, she realized but it was starting to freak her the hell out.

“What’s going on, Spar?” she demanded in a whisper that threatened to break into jagged pieces. “It’s getting worse. Why is it doing that?”

“It is the way of the mark. I had hoped I was wrong, that it hadn’t fully settled on you.” He looked up at her, pinning her with his gaze. “The mark is attempting to claim you.”

“Claim me?” She choked on the words, and a sense of foreboding swept through her. “What the hell does that mean?”

Spar grasped her other hand and tugged her closer. His knees closed around her, but instead of making her feel trapped the pressure comforted her on a visceral level. Without Fil realizing it, in the past twenty-four hours, this man had become a safe haven for her. Somehow that frightened her almost more than everything else put together.

“Listen to me,” he said, squeezing her hands to focus her attention back on him. He waited for her to take a shaky breath before he continued. “I want you to understand that I will protect you from this moment forward. I will allow no other enemy to touch you, no other harm to come your way, and we will find a way to remove the mark.  I swear this to you.”

“Okay, I know you’re trying to reassure me, Spar, but you’re just kinda freaking me out even worse.  What the hell is up wit this mark thing? Why is it changing?”

“The mark was placed on you to try to claim you in the name of Uhlthor, one of the Seven. By placing his symbol in your skin, the nocturnis hoped for one of two outcomes: either you would become an offering for the demon to feast upon, or you would surrender yourself to his power and become another of his army of minions.”

A hysterical laugh bubbled out of her chest. “Uh, neither of those options really works for me, you know?”