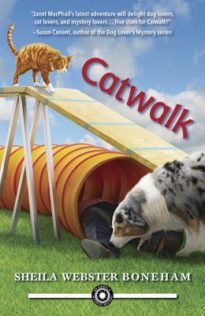 Catwalk (An Animals in Focus Mystery, #3) by Sheila Webster Boneham

This series reminds me a little of the Mattie Winston Mysteries by Annelise Ryan. Janet MacPhail and her search and rescue dog, Jay, as well as her boyfriend Tom Saunders are once again stuck in the middle of a murder investigation. No one is going to miss this victim, but more than likely the killer is going to be a friend of Janet and Tom’s.

Janet MacPhail and her Australian Shepherd, Jay, and once again embroiled in a not really that exciting murder investigation, all while balancing her relationship with fellow dog lover, Prof. Tom Saunders.

Janet’s friend Alberta from the Dog Dayz training center is looking for Janet’s help. Alberta believes someone abducted her cat and she wants Jay’s clever nose to find her. Jay manages to track down Alberta’s cat, but she hasn’t been kidnapped. She slipped into the neighbor’s shed to give birth to her three little kittens. Unfortunately, the neighbor isn’t a big fan of cats in general, let alone Alberta and her crusade to trap, neuter and release the feral cats which are living on the property that Charles Rasmussen and his development company want to turn into condos.

There’s no question after spending five minutes in the story with Charles Rasmussen, who is our eventual victim, that he’s an ass, no one likes him and that the list of suspects is huge, including Alberta, Charles’s abused wife, Charles’s tortured and infirmed father-in-law, people who he has forced out of properties he wanted, local environmentalists and just about everyone in town. So actually it’s a bit grasping at straws when they question Janet for the murder just because he was trying to press charges for trespassing. Rescuing a lost cat wouldn’t have equated to a life sentence or even a fine so why she should be on the list of suspects let alone be concerned about proving her innocence is the real mystery.

Other than the murder, we go about Janet’s life with her while she spends time with her dog, Jay, and cat, Leo, and her friend, Tom. Janet is over 50 so Tom’s status is a little in question since boyfriend is a little childish. Janet is trying to determine if she wants to take the next step and move in together when she overhears Tom making plans to vaccinate his dog so he can leave the country. She knows he was thinking of a sabbatical but she doesn’t know where that will leave her relationship.  Tom tries to talk to Janet, but she appears to have a habit of zoning out in the middle of conversations and being too embarrassed to mention she wasn’t actually listening to you, so she jumps to a lot of conclusions.

We meet all of Janet and Tom’s pet owning friends and attend an agility trial with them, including something I never heard of before – cat agility.  Janet is training her cat in agility as well as her Australian Shepherd.

If there was ever a book that I should have written or that was written specifically for me, this would be it.

I competed in agility for several years with my American Eskimo Dogs. My girls and I spent many lovely days (and many rain drenched, muddy weekends) competing in agility. This was mostly pre-children. Winter and Dakotah both have been gone a few years now and I have started training my 2 year old Australian Shepherd, Bowen. We haven’t gone out to competitions yet since time and money are limited for Mommy Funtime, but I don’t doubt he will be quite successful once we get in the ring.  Well, that is if my daughter lets me have a turn. Now that he knows the basic equipment, she takes over my classes. What I am impressed with is that my dog understands that he needs to work slower with her than he does with me.

But even with my love of the topic, and I am one of the few who will get all the inside comments (like recognizing the other competitors by their dogs names but not theirs), the story line wasn’t that exciting to grasp anyone’s attention who isn’t reading it because it was about a murder at an agility competition. I know lots of people who would enjoy this, but it is more geared to a very specific group of my friends who compete in obedience, agility and tracking. I don’t know that this has such a general audience appeal.

I did have one issue with her writing style. On several occasions she gives you a hint of something near the end of a chapter, and then the next chapter you started somewhere else. For example, when Alberta wanted Janet to read a letter she received and was very angry about. She hands the letter to Janet who couldn’t believe it…and then the next scene started the next day and we had to backtrack to the information in the letter. Doing it once as a way to build suspense is fine, but she did it at least three times just in the beginning of the book. She also had a habit of making Janet comment to herself like a schizophrenic  — We can manage this, snarked Janet demon. He knows that, countered good Janet. He wants to help, not take over. I just found it odd to Jekyl and Hyde your inner monologue.

I chose this scene because this was me at dog trials with Winter. She was so confident and had such drive and she was just so happy to be jumping that she always took the Judge’s course map as more of a suggestion than a hard fast rule. She had an incredible stay at the start line, but after she was released, all bets were off. Usually I just stood in the middle of the ring laughing and waited for her to remember why I was there 🙂 , but not everyone is out there for just the fun of it.

“Let me get one run in, okay? I’m after the next dog,” I gestured toward the course-practice ring. “There are only two of us at this height,” meaning I couldn’t switch with anyone because they would be changing the jump heights after my run. Giselle nodded and started her little dog back through the weave poles. Precious may hit nine inches at the shoulder and seven pounds dripping wet right after a meal, but he’s a big dog on the agility course. I stopped to watch him rip through the weaves. His tail wagged the whole way and as he tore past the last pole he let out three sharp “Yippee” yaps.

Jay also had a happy run when his turn came. A little too happy. He held his stay at the start line, but the instant I signaled him to run, he switched to I-have-a-better-idea mode. Like many lighting-fast, shockingly smart dogs, he likes to make up his own challenges if the human is too slow with the next directive. I had positioned myself at the third obstacle, the chute, so was able to signal the three obstacles easily enough–bar jump, tire jump, chute—but after that I played a game of catchup and redo. If we had been competing, we’d have scored a nonqualifying run when Jay flew up and over an unscheduled A-frame. After that, I was late arriving at another bar jump, so my goofy dog jumped it, jumped back toward me, spun around, and jumped it again. He also took an extra trip through the tunnel and a nonplanned on-and-off at the pause table. When we left the ring I was panting Jay was bouncing and grinning, and everyone else was laughing.

Almost everyone. Peter Birdwhistle, a recent transplant to Fort Wayne, spoke as we passed him, “You need to discipline that dog and tighten up your run. I can help you if you like.”

Yeah, right, I thought. Peter’s Golden Retriever was a nervous wreck. Obedient, yes, and fast and accurate. But he lacked the joy we see in most Goldens and most agility dogs.

“Or I could run him for you sometime.”

That made me turn around and ask, “Why would I want you to do that?” Because I’m too old and fat and, wow, treat this dog-sport thing like a great way to have fun with my dog, win nor lose?

“Well, you know, to get the best scores…”

“Peter, I know you’re pretty new here, so let me put your mind at ease. I don’t do this to win. I don’t do it for scores. And I don’t have a dog so that someone else can play with him.” 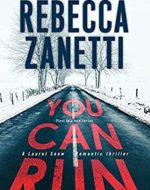