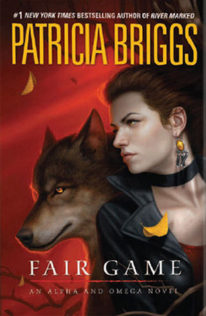 [box style=”rounded” border=”full”]The werewolves are now out to the humans.  With the world watching anything that might show the danger of werewolves, any transgressions which might have been dealt with a rolled up newspaper, now require a death sentence.  Killing wolves who break the rules is up the Charles, as his father’s enforcer, but killing wolves who normally would have been given a warning is wearing on Charles and his relationship with Anna is suffering for it. [/box]

About a year has past since Charles and Anna first mated.  The wolves have come out to the public and this has created new problems between them.   The Marrock can no longer show mercy to wolves who need more time to control themselves or who’s <em>small</em> transgressions would have been dealt with within the pack.  The pressure of being forced to kill wolves who should be getting a second chance are now haunting Charles–literally. He is being haunted by the spirits of the men his is forced to kill. A group of those wolves included men who were sent out to kill a pedophile and went too far — making a snack of the man. Humans were looking at the wolves for that heinous act forcing Bran to send Charles out when their own Alpha refused to put them down.

It takes all of Anna’s will to stand up to Bran to make him see that his need to keep the wolves in line is torturing Charles. Charles sees himself as nothing more than a killer and hates himself for tainting Anna with his evilness. To protect Anna, he has all be shut down the mating bond between them so that his wrongs cannot touch her as well.

The FBI are investigating several deaths involving werewolves and at the urging of Anna and Adam Hauptman, the Marrock sends Charles and Anna to help in the investigation.

Once Charles and Anna start looking over the files of the victims, Charles realizes that the last few decades the victims are Fae and more recently some werewolves. The FBI are looking for a human, but to take down some very powerful Fae and wolves, there has to be something more. Pictures of the victims disclose markings which would have been made by a witch. Death spells are very powerful and someone has been working with a witch to harness the pain of their victims, but for what purpose?

When the most recent kidnapping is the half-human daughter of a very powerful Fae, he will join Charles, Anna and the FBI in seeking out these killers. Even with the help of the Fae and the Boston pack, they might be too late to stop these killers who have been hunting the top predators for decades.

THOUGHTS:
I do love Patricia Briggs’s characters and although there is not much cross-over with her Mercy Thompson series, they are occurring consecutively. Beginning in Mercy Thompson’s Frost Burned, the Fae have secluded themselves on their Reservations declaring themselves separate from the United States. I didn’t understand what I has missed about that, but it appears that I missed this book which will explain what happens between the Fae and the humans.

My favorite scene from this book involves Anna and Bran. I loved that Anna has grown so confident in her year with Charles and so protective of him, that she stands up to Bran and even though he is very angry since he can’t force Anna (an Omega) to back down, she won’t until he all but begs her to walk about before she sends him into a rage where he might hurt her. This is not the same woman who was abused in Chicago and was afraid if anyone looked at her twice. She is not completely healed, but she has come a long way. Charles’s self-torture will do some damage to their relationship and cause Anna to flip flop between fighting against Charles and a revisit of her own self-doubts that maybe he doesn’t want her anymore.

We also meet some new characters, who we will see again in Dead Heat, but I will save that review until closer to the release date.

Like the Mercy Thompson series, I did a binge reading on this series and am very sad to have caught up, including the next release Dead Heat. With only one release per year, it will be some time before the next book is out. *sob*

No one who saw him like this would ever forget what lurked behind the Marrok’s mild-mannered facade. But only people who were stupid–or desperate–would risk raising his ire to reveal the monster behind the nice-guy mask. Anna was desperate.

“When you tell me you will quit calling on my husband to kill people,” Anna told him doggedly. She didn’t yell, she didn’t shout, but she wasn’t going to give up easily.

Clearly, she’d finally pushed him out to the very narrow edges of his last shred of civilized behavior. He closed his eyes, turned his head away from her, and said, in a very gentle voice, “Anna. Go home and cool off.” Go home until he cooled off was what he meant. Bran was Anna’s father-in-law, her Alpha, and also the Marrok who rules all the werewolf packs in his part of the world by the sheer force of his will.

His power unleashed with his temper, and the five other wolves, not counting Anna, who were in the living room of his house dropped to the floor, even his mate, Leah. They bowed their heads and tipped them slightly to the side to expose their throats.

Though he made no outward move, the speed of their surrender testified to Bran’s anger and his dominance–and only Anna, somewhat to her surprise at her own temerity, stayed on her feet. When Anna had first come to Aspen Creek, beaten and abused as she’d been, if anyone had yelled at her, she’d have hidden in a corner and not come out for a week.

She met Bran’s eyes and bared her teeth at him as the wave of his power brushed past her like a spring breeze. Not that she wasn’t properly terrified, but not of Bran. Bran, she knew, would not really hurt her if he could help it, no matter what her hindbrain tried to tell her.

She was terrified for her mate. “You are wrong,” Anna told him. “Wrong. Wrong. Wrong. And you are determined not to see it until he is broken beyond repair.”

“Grow up, little girl,” Bran snarled, and now his eyes–bright gold leaching out his usual hazel–were focused on her instead of the fireplace in the wall. “Life isn’t a bed of roses and people have to do hard jobs. You knew what Charles was when you married him and when you took him as your mate.”

He was trying to make this about her, because then he wouldn’t have to listen to her. He couldn’t be that blind, just too stubborn. So his attempt to alter the argument–when there should be no argument at all–enraged her.

“Someone in here is acing like a child, and it isn’t me,” she growled right back at him.

“Anna, shut up,” Tag whispered urgently, his big body limp on the floor where his orange dreadlocks clashed with the maroon of the Persian rug. He was her friend and she trusted the berserker’s judgment on most things. Under other circumstances she’d have listened to him, but right now she had Bran so angry he couldn’t speak–so she could get a few words in past his stubborn, inflexible mind.

“I know my mate,” she told her father by marriage. “Better than you do. He will break before he disappoints you or fails to do his duty. You have to stop this because he can’t.”

When Bran spoke, his voice was a toneless whisper. “My son will not bend or break. He has done his job for a century before you were even born, and he’ll be doing it a century from now.”

“His job was to dispense justice,” she said. “Even if it meant killing people he could do it. Now he is merely an assassin. His prey cling to his feet repentant and redeemable. They weep and beg for mercy that he can’t give. It is destroying him,” she said starkly. “And I’m the only one who sees it.”

Bran flinched. And for the first time, she realized that Charles wasn’t the only one suffering under the new, harsher rules the werewolves had to live by.

“Desperate times,” he said grimly, and Anna hoped that she’d broken through. But he shook off the momentary softness and said, “Charles is stronger than you give him credit for. You are a stupid little girl who doesn’t know as much as she things she does. Go home before I do something I’ll regret later. Please.”

It was that brief break that told her this was useless. He did know. He did understand, and he was hoping against hope that Charles could hold out. Her anger fled and left…despair.