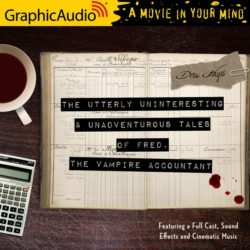 This special presentation of Book 1 of Fred the Vampire Accountant is phenomenal.  While it was a little pricey, it certainly was worth it for audiobook lovers.

Grab a copy of Graphic Audio’s production of Fred the Vampire Accountant.

I am aware that not everyone enjoys audiobooks as a reading option.   I don’t know if that comes from trying a bad narrator or worse, some text to audio robotic reading, but the difference between these Graphic Audio and those bad presentations would be like comparing a Prius to a Porsche.  They’ll both get you where you are going but really only one will be enjoyable.

Most of the Drew Hayes novels that I have enjoyed were by audiobook.  He always manages to contract with the best narrators for the series.   That’s why I was hesitant to grab a copy of this audiobook since Kirby Heyborne makes the perfect Fred and after six Fred novels, I was a fan of Kirby/Fred.  While I still think Kirby gave us the best nerdy Fred narration, I would absolutely thrilled with this Graphic Audio presentation.  Let me explain what makes this so much better.  To begin with there are 16 narrators involved in this production, each voicing a different character.   In addition, there is music and sound effects scattered throughout the story.  I knew as soon as I heard the tinkling of a piano that accompanied Fred’s introduction of his change from human to vampire like a Vegas lounge pianist giving an intro to his next song, that this was going to be worth the re-read.   There was Background music and crowd noises at the HS reunion.  Growls and snarls by the shifters.   The rattling of chains when Fred is attacked and chained up.  A movie playing in the background on his date with Crystal.  An actual knock on the door when someone stops by Fred’s apartment.  I saw several notes and reviews that this presentation was more inline with old time radio and that is absolutely the best example of why this is such an improvement over even the most talented narrator.

Graphic Audio has a whole catalog of Fantasy, Westerns, SciFi and a few romances.   Why should you choose The Utterly Uninteresting and Unadvanturous Tales of Fred the Vampire Accountant?  Simply put, Fred is the most awesome nerd you have ever met.  He admits that he had a false presumption, based upon Hollywood movies, that vampires were cool and suave, but he learned that nothing changed in his life.  While he might have slimmed down a bit, he still wears his glasses (sans prescription) and his favorite sweater vests.    Fred was attacked and abandoned by his sire.  And with no one to guide him through the parahuman world, Fred returned to his normal boring routine except he had to work night hours and change his favorite snack from wine and Brie to blood and brie.

The book is broken down into five short stories which build upon each other.  In the first story, where Fred goes to his 10 years high school reunion and gets reacquainted with his friend Krystal Jenkins, is a turning point in Fred’s undeath.  From there, like Dorothy on the yellow brick road, Fred meets new parahumans who become part of Fred’s group of friends who he can always count on.

As I said, Fred goes to his high school reunion, and to make sure he doesn’t back out, he buys himself a nonrefundable plane ticket…until he realizes that the ticket is for the daytime and decides to drive.  He also packs for several extra days in case he wants to be spontaneous.  The reunion is being held at Halloween so everyone is in costume so no where realizes at first that the werewolves in attendance are real.  Since most of Fred’s high school years were spent running from the bullies, he has no problem with is new enhanced abilities to try and make a run for it, he just can’t bring himself to leave his friend Krystal or the rest of the humans for the slaughter, but what’s a nerdy vampire to do against a pack of werewolves?

Then Fred and his new girlfriend, Krystal attend a LARP (live action role playing) where a shambling creature has been seen in the woods.  Fred is dragged into a group of “vampires” who are planning an uprising against the “King” played by a skinny teenager playing necromancer.  When Neil begins a spell to freeze the undead “vampires,” Fred is unconcerned until he finds that he really cannot move and realizes that the necromancer is real and so is his zombie BFF.

Fred also needs to take on Draklings in Vegas and track down a missing mage with the help of Richard, the leader of the Therians (shapehifters) and Gideon, the King of the West.   Fred also comes face to face with his sire who is quite disappointed that meek Fred didn’t take his enhanced powers and go on a bloody rampage through the town.

I really like that instead of grabbing a sword to battle his monsters, Fred manages quotes tax codes to win the day.   He is always thinking outside the box and always manages to find a solution that  doesn’t require bloodshed.  Even six books into the series, Fred has stayed true to himself, to who he was before the change and does whatever he has to to protect his friends.  He might be stronger and faster as a parahuman, but he will always be a quiet, nerdy accountant who is a good undead American and loyal friend.

I have already picked up book 2 in the series which was just released by Graphic Audio and since I had received an email from the company with a half price sale code, I also treated myself to two books in a SciFi series.

Most of the story is told by Fred, but Krystal is as lively as Fred is nerdy and I have to go with some of Krystal’s chapter.

Anyway, while the ghouls milling about weren’t attacking anything, the sound of their clacking jaws was still annoying as hell, hence my request for music. Plus, I was bored. So sue me.

“Such a brave damsel.” Quinn said perched a few feet away on a decaying pulpit. I’ll give him this, the man picked a theme and stuck with it. “There’s no need for such demonstrations of bravery. It will not change your fate.”

“Uh, huh. That’s great and all, but I was serious. You guys have obviously been hold up here awhile. You’ve got to have a television or something. I’ll take a boombox. The clacking is starting to give me a headache.”

Quinn threw back his head and laughed. A rich and elegant tone that had clearly been worked on until it was perfect. Great. This was a motherfucker who actually practiced his evil laugh.

“I do love the bravado you agents show in the face of certain death,” he said. I think intending it as a compliment. “Sadly, we have no such entertainment devices. Our kind is beyond the need for such petty distractions.”

“Buddy, there’s an all-vampire group in my department that goes and sings karaoke every Wednesday night. They also took three days off when the last Call of Duty game came out. I happen to know for a fact that Freddy still has an active World of Warcraft account and a giant movie collection. Save the Anne Rice shtick for someone who doesn’t work with and freaking date ‘your kind’.”

Quinn had me by the throat in less than a second. Whatever he’d been drinking imparted a lot of speed. His face had contorted into a wild snarl, fangs bared as room temperature breath swept over me. I could feel the tension in his fingers. The concentrated effort not to crush my throat. He had so much strength it was hard not to, especially since it was obvious how much he would enjoy it.  A smart hostage would start playing nice very quickly.

“Well, I know you haven’t been drinking the blood of the mouthwash monster. That’s for damn sure.”

A bulge of the eyes, a tremor of the fingers, and then I was hurled back to the ground. Damn. 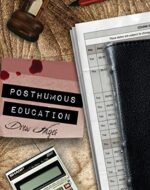