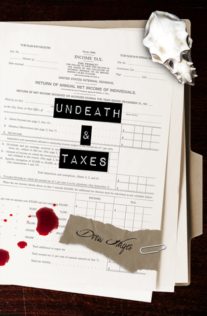 Undeath and Taxes (Fred, the Vampire Accountant, #2) by Drew Hayes

[box style=”rounded” border=”full”]Fred and the gang are back for more adventures. I was so excited when this story was finally released back in July, but I had to hold out for the audiobook which was just released. Kirby Heyborne did such a great job bringing this series to life for me, I had to hold out to hear his presentation.[/box]

Trouble has once again found our favorite vampire accountant and we couldn’t be happier.

We learned in the last novel, that Fred’s sire turned him in hopes that vampire powers would send Fred into a killing rage of vengeance against all the oppressed the boring, unassuming accountant. What he didn’t know is that Fred was very happy with his life and with no other influence, decided to continue with his lifestyle. Fred was almost disappointed that none of the Hollywood stereotypes about vampires are actually true. Fred didn’t become handsomer or more suave. Even after his change, Fred was still…Fred. He just craved blood, wore his glasses for show, needed to stay out of sunlight and had to watch how much pressure he used to open a jar with his new super-strength.

The only real change Fred made in his life was to open up is own business so that he could keep night hours. Now, his accounting business is booming both due to the fact that, as a vampire, he really isn’t required to sleep, and he is now certified to do taxes for the parahuman community and is aware of all the special tax benefits which are allowed to them. He is now courting a completely new level of clientele.

But wanting to lead a quiet life just doing accounting and spending time with is girlfriend, Krystal, and his friends, doesn’t preclude problems from finding Fred. The best part of this series is that even though Krystal is an kick-ass agent, Fred hasn’t suddenly learned hand-to-hand combat or even attempts to get into a fight. Fred still uses his brains, his ingenuity and sometimes his vast knowledge of the tax codes, to help get him and his friends out of trouble.

The story begins with a bang…or really a kidnapping. Fred has just received his certification to do taxes for parahumans and is contacted by Richard, the alpha of the Therians, to prepare his tax returns for the year. While both the dragon Gideon, who is the King of the West, and Richard are off doing their duties, Richard’s daughter Sally finds her way to the office to see if Fred would be willing to play with her. It is at that moment that kidnappers break into Richard’s apartment to capture Sally and her vampire bodyguard. Fred isn’t much of a bodyguard, but he won’t tell that to the kidnappers that since he can’t let Sally go alone into what must be a frightening experience for a little girl.

Fred doesn’t look for adventure but it certainly finds him, and when someone he cares about is in danger, he finds the courage he needs to keep everyone safe.

THOUGHTS:
Fredrick Frankford Fletcher, or just simply Fred, is a delightfully unassuming character and yet absolutely compelling in his storytelling. This book is broken down into five journal entries. It is hard to get into too much detail since one story leads into another and to talk about the later stories would give away too much from the earlier ones.

Fred is still joined on most of his adventures by his girlfriend, Krystal, a kick-ass government agent part of the parahuman investigation, his assistant, Albert, the happy-go-lucky zombie, Neil, the necromancer and BFF of Albert, Amy, the Mage in charge of training Neil, and Bubba, the were-steed.

Suffice it to say that after reading the first book in the series, where Fred meets all of his friends, it was great to jump right into the stories knowing most of the main characters and secondary characters.

It is hard to explain what is so incredible about this series and this author.  It isn’t nail-biting excitement.   It isn’t an Avenger’s kick-ass team.  It it just Fred working past his mild-manner persona and trying to make the best of these dangerous situations that find him without using force or fighting skills which he does not even possess.

I especially love the audiobook presentation of this series.  Drew Hayes has been fortunate to find very talented narrators for his series.  Kirby Heyborne really brought the series to life for me in The Utterly Uninteresting and Unadventurous Tales of Fred, the Vampire Accountant.  I just had to wait to read Undeath and Taxes until the audiobook was released.  Even looking again at my digital copy, I hear Kirby Heyborne’s narration.

Received a audiobook courtesy of Tantor Audio in exchange for an honest review.

By the time Arch came to get us, Krystal had woken up and wandered over, with Albert and Neil joining us about fifteen minutes later. We were in the middle of a spirited game of Hearts when I first picked up the scent of his cigarettes wafting down the hall. When he finally arrived, we’d put the cards away and were on our feet, waiting for him.

Arch lifted one of his eyebrows carefully when he saw our united front. “You all thinking of jumping me?”

“What?” (It is my unfortunate burden to admit that I may have yelped that word just a touch. My already healthy fear of agents had been compounded by Krytal’s assessment of Arch’s abilities.)

“You’re all up, looking like you’re ready to throw down.” Arch took a long drag of his cigarette as he eyed each of us. “Of course, you’d have had to take out Agent Jenkins first, and at least one of you would have been smart enough to ambush me when I came through the door. Wouldn’t have worked, obviously, but it would have been the smart play.”

“Enough,” Krystal said, using the voice she generally reserved for dealing with people she was arresting–and cable companies. “Everyone is playing along real nice, arch. Don’t push it.”

“Sorry, just thought I’d try to lighten the mood. All right, Weapon Bearer Albert, you’re coming with me. Technically, the contract holder and the necromancer have the right to oversee this, so Agent Jenkins can lead them to the observation area.”

“As the necromancer’s master, I am permitted to follow him anywhere I deem my presence to be needed,” Amy said. I wasn’t sure what she’d taken in the last hour or so, but her hair was shining like long strands of tinsel and there was a soft purple flow around her eyes.

“And Bubba’s coming too,” Krystal added.

“What rule are you invoking for that one?” Arch asked.

“Section fifteen, paragraph twelve. It’s the one titled ‘fuck you; it’s happening because I say so.’ Surprised you didn’t know that one, Arch. Most agents invoke it all the time.”

I could actually see Arch consider pushing back on Krystal, but evidently he decided he had better ways to spend his energy than slamming it against the brick wall known as arguing with my girlfriend. My regard for his intelligence rose a few more notches.

“You know, you clean up pretty nice.”

“I would take more comfort in that notion if I weren’t so keenly aware of the fact that I’m going to be walking in with the absolute definition of beauty. How well I clean up is unimportant; no one will even realize I’m there once they see you.”

Krystal stared at me for a moment, then did something I was completely unprepared for. She blushed. Only a touch in the cheeks and for no more than a few seconds, but it was unmistakable. The rising of blood is not the sort of thing my vampire senses were likely to overlook. Then, as quickly as it was there, it was gone, hidden in a flurry of movement as she stepped closer and kissed me firmly on the lips. By the time I pulled free, there was no trace of those red cheeks. Instead, she wore her usual half-wild grin.

“Keep up the sweet talk, and I’ll end up making us late for this thing.”

“Wonderful as that sounds, I would be too embarrassed to leave this room if the others heard us…being affectionate. Which would be unavoidable, since at least two of them have enhanced hearing, possibly three depending on which potions Amy has taken so far today.”

“Actually, I sent the kids off to school,” Krystal replied, gently teasing one of the buttons on my pressed, white tuxedo shirt. “I thought it might be nice if we went over together, just the two of us. It’s been awhile since we managed a real date, and since I’ve got an out-of-town gig coming up, we probably won’t pull one off for another week or so.”

“I’ll have to plan something special for your return, then.” I gently ran my hand across Krystal’s cheek, perhaps unconsciously trying to sense the heat that had been there only minutes before.

“Please do. I like hanging out with the gang as much as anyone else, but even I like some romance from time to time. Just…you know the deal.”

“No reservations that can’t be canceled,” I said.

She nodded and took a step back, finally breaking the half-embrace we’d locked ourselves in since she fixed my bow tie. “Yeah. I hate that we have to make that rule, but I never know when call is going to come.”

“You don’t ever need to feel bad for doing your job. We came into this with open eyes. I knew who I was committing to. Sometimes, I have to let plans fall away due to your more pressing matters; sometimes, you have to watch movies that don’t have slapstick or explosions with me. We’ve all got our burdens to bear.”

“It could be worse,” Krystal conceded. “At least you clean up nice. Just don’t get too comfy in that tux.”

“I daresay it would take a mage of legendary caliber to make such a thing viable, so I doubt it will be an issue.”

“Good, because Albert is staying with Neil tonight, which means we’ve got the apartment all to ourselves.” She threw me a glance that, even on my least socially adept day, I could have correctly interpreted. After having been with her for so many months, I knew its meaning in an instant.

“Ah, um, right. Yes.” I would love to report that I’d reached a point where I was finally less bumbling when it came to discussing intimate matters; however, such was simply not the case, as my swarthy dialogue proves.

“Whoa there. Put a leash on it, you wild animal. We’ve got to get through the party first.”

3 responses to “Audiobook Review: Undeath and Taxes by Drew Hayes”