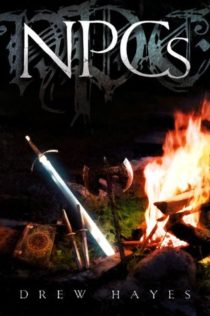 [box style=”rounded” border=”full”]Another great story by Drew Hayes.  He has created a world that suffers from the actions of the (role playing) adventurers who journey through on their quests. While this is not a nail-biting thriller, it is a clever premise with strong, interesting characters.   A second story is due out for 2015, I will definitely be picking it up.  I am the newest fan of Drew Hayes[/box]

NOTE:  I listened to the audiobook version so I might misspell names.  Sorry.

NPC stands for non-player characters.  In a role-playing game such as Dungeons & Dragons, these would be the people the players interact with in the fantasy realm, such as a blacksmith or the shopkeepers.  In Drew Hayes’ kingdom of Solium there is more to this realm than just a backdrop for the players.

In our world some friends get together to play the newest version of Spells, Swords & Stealth, but being unfamiliar with the game play, they quickly make the mistake of mixing a dinner of forest mushrooms and a big mug of mead at the local tavern.   When the mead causes a fatal rise in the toxic levels of the mushrooms, our four game players are dead before the game really begins and must start the game all over again.

But what happens in the fantasy town of Maplebark where four adventurers now lay dead in the tavern of half-orc Grumph, the maker of the best mead this side of the palace?  Grumph and his friend Thistle, a gnome and former minion for hire, find the bodies along with humans, Gabrielle, the Mayor’s daughter and town guard, Eric.  The adventurers are carrying a scroll from the palace requesting their help on an adventure.

Grumph, Thistle, Gabrielle and Eric all know that if the mad king finds out that his adventurers died in Maplebark, he could destroy their town in retaliation.  Their only hope is to pretend to be the fallen warriors and leave the town as soon as possible.  Since none of them are skilled adventurers, they know their chances of survival are slim, but they only hope to survive until they are far away from Maplebark so their families and the town will be safe.

They take on the personas of the barbarian, the rogue, the paladin and the wizard and as they travel they find that their original choices don’t fit.  Once they reassign their roles,  they become more confident and capable and begin to believe they might just live long enough to complete their task and go home.

But the original adventurers are back in the game and they are finding it more fun to murder and loot than to actually follow the campaigns.  They are trying to locate the adventurers who took their missive from the king, but whether they are going to do the campaign themselves or just lay in wait for the adventurers to complete the task and steal the treasure for themselves, is the real question.

THOUGHTS:
I really love that Drew Hayes creates all his heroes from ordinary people and yet he can manage to keep them as just ordinary people who step up and do extraordinary things.

I have never played Dungeons & Dragons, but I had no problem filling in the blanks on some of the issues. Since all of the adventurers our foursome meet on their journey are foursomes and that each contain a wizard, a paladin or knight, a rogue and a barbarian, obviously this is part of the role playing game set up.  They also pick up some odd phrases from the adventurers who pass through town which explains why their speech is peppered with familiar phrases.

Also, it appears that Gabrielle (the Mayor’s pretty daughter) had a problem and was always being abducted by goblins. I am guessing that this is a standard quest in a role-playing game – saving the fair maiden from the evil goblins. This made it quite funny since Eric, who was a guard, could never figure out how the goblins kept kidnapping her and since the goblins just used her as bait so they could rob adventurers, they treated her like one of the family.

I also  like that the smallest member, Thistle, the gnome, was the default leader of the group.  As a former minion for adventurers, he had the most knowledge and in fact, that knowledge comes in very handy keeping our group safe.

These are well written and likable characters and you will be cheering for their success. Like me, you will definitely be looking for more adventurers with this group. There is a second story due out by the end of the year.

Although Roger Wayne was a different narrator than was used on Fred, the Vampire Accountant, he also did a fabulous job bringing these characters to life.   Personally, I will have to hold out for the audiobook releases on the sequels to both series since they both were incredible performances by their narrators.

To call what had taken place a battle would be an overstatement. Even skirmish would be giving the new adventurers too much credit. Goblins, while physically weaker than humans, were experienced in dealing with stronger opponents and skilled in using the environment to their advantage. By the time the party had braced for battle, twenty archers had emerged from the bushes, followed immediately by ten warriors with polearms.

Making a snap decision, Thistle had immediately called out their surrender. Five arrows a piece was more than he felt confident most of them could endure, and those who did survive wouldn’t be in any shape to fight off a polearm. Once they’d thrown down their weapons, a goblin runner had been dispatched, returning less than an hour later with some other goblins riding ponies and of course, the cage carts.

While getting inside, Eric had managed to slip on the step and strike his head against one of the rear planks resulting in the one and only injury from their battle.

“I’ve got good news and bad news.” Gabrielle called from her cart in the front. She’d been gibbering with the goblins since their departure, greeting them with such familiarity that the others found it somewhat disconcerting. “Bad news is that now that they know I’m here, they’re going to send a runner into town to announce it and lure out adventurers. The good news is that it’s almost sunset so they won’t do it until morning.”

“Gabby, pray-tell when did you learn to speak the goblin language?” Thistle asked, his restrained voice as polite as he could make it.

“Goblick isn’t hard to learn if you have a decent teacher.” Gabrielle replied. “I learned it years ago from one of the goblin commanders who can speak the proper kingdom language.”

“I think Thistle was more asking about why you speak it.” Eric clarified.

“Because things would really boring if I didn’t. Sometimes its two or three weeks between when they kidnap me and when the adventurers would arrive for the rescue. It’s a lot of downtime and the goblins only let me pack so many books when they would kidnap me.”

“They let you pack?” Eric asked certain his ears had deceived him like the vile villains they were.

“They did once I explained to them that it would make my downtime more pleasant. Don’t get me wrong, they make a point of teaching me things about the forest and taking me on hunts, but they’ve got real things to do and can’t spend all day defending me from boredom.”

“It’s pleasing to know that we have such kind hosts.” Thistle said, jumping in before Eric asked any more questions that might ultimately give the young man a stroke. “Any chance they’d let us out of the cages once we arrive at their war camp?”

“I don’t think so. If it were just me, certainly, but since they don’t know you all, I get the feeling they’re trying to keep up appearances. They didn’t even bring my usual horse for me to ride.”

“She had her own horse.” Eric muttered slinking down against the firm, yet pliable wooden bars of his moving cell. “I once stayed up for thirty hours straight to guard her door because we heard goblins were in the area, and she had her own horse she rides away on.”

“River Jump is not my horse.” Gabrielle defended. “She’s just one I like and who knows me. Bringing her makes the whole process easier on everyone.”

“Gabby, I think perhaps we should let Eric be for a bit.” Thistle encouraged. 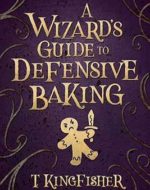 Audiobook Review: As You Wish by Helen Harper
« Review: Taken by a Dragon by Felicity Heaton
Review: The Unleashing by Shelly Laurenston »