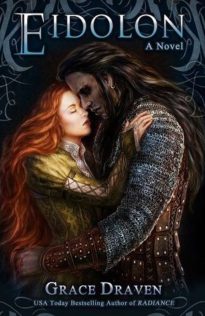 In a bid for more power, the Shadow Queen of Haradis has unleashed a malignant force into the world. Her son Brishen, younger prince of the Kai royal house, suddenly finds himself ruler of a kingdom blighted by a diseased darkness and on the brink of war. His human wife Ildiko must decide if she will give up the man she loves in order to secure his throne.
Three enemy kingdoms must unite to save each other, and a one-eyed, reluctant king must raise an army of the dead to defeat an army of the damned.
A tale of alliance and sacrifice.
Sequel to RADIANCE and Book #2 in the Wraith Kings series

I love Brishen and Ildiko. ♥

A tear in the fabric between worlds unleashes demons into the Kai city of Haradis with the royal place at the epicenter.  With all the Kai fleeing for their lives across the river, because every knows that the gala can’t cross running water, no know know what has become of the royal family

All the refuges head towards Saggara and Brishen Khaskem, their new king, for protection. After spending his whole life as the royal spare, Brishen isn’t excited to embrace his new elevated station, even as Interim King.

The Elsod, or Keeper of the Memories, comes to him bearing the only solution to the galla problem.  The galla cannot be killed so Brishen must undergo a ritual and become a Wraith King so he can round up the spirits of the dead and push the galla back behind the barrier.   More, because the Kai spirits still lingering won’t be enough to push back the hoard of galla pushing into this world, Brishen will need to convince the Gaul and Baledine Kingdoms to send their own people to suffer a death ritual so they can command their own spirits.  Who in their right minds will volunteer to subject themselves to a death ritual which may or may not succeed.  Even if Gaul and Baledine weren’t at each other’s throats, they would want to keep their powerful mages close because once the galla finish with the Kai, they will seek out more prey.    This ritual is also going to demand a sacrifice that Brishen can’t allow anyone to ever know about or his people will turn on him for his blood.  Brishen will need to steal that little bit of magic that every Kai still  holds in order to fuel the great magic needed to create the Wraith Kings.

With everything going on: galla, his missing family, refugees, food shortages, aristocracy jockeying for position with the new ruler, Brishen has missed one important fact that his beloved Ildiko has not.   Brishen is no longer the spare.  He is now the last living member of the House of Khaskem, one who is married to a human woman who can’t bear him a Kai heir.   The Kai are going to expect Brishen to put aside his human wife and remarry a Kai women who can ensure the future of his House.

Brishen will do anything for his people. He will accept the burden of king, he will risk his life to push back the galla but he will not give up his beloved Ildiko.   But no matter how hard he fights against it, he can already feel that he is loosing his very practical wife who was raised to do her duty for a Kingdom.

This story was slightly altered in the story telling since we added another POV of Ildiko’s former lady’s maid who is traveling with some palace guards.  Through their eyes we see the fall of the palace and the deaths of many as the galla first attack the city and those who sacrifice themselves so others have time to cross the river.   This leaves us bouncing between Ildiko, Brishen and Kirgipa.  We also focus a little less on the love story as we have established that Ildiko and Brishen are happy together and now we have the drama of demons attacking.   I thought the whole Wraith King ritual, etc. to defeat the galla was a bit convoluted but the story was still very entertaining.  I still think the interaction of Brishen and Ildiko is the best part of the series.

I had planned to jump into the third book since the cover was shown on the authors website and I was coming late to this series but couldn’t find it.  I did see on Amazon that the release date was pushed back to September 2020.  Someone commented yesterday that the author is posting it serialized on her website.   There is the link where she explains why and the difference between the serializing and the final copy which will be on sale in September.  Book 3 – Ippos King   This third book features the Baledine Margrave Serovek Pangion, who has his heart set on Brishen’s cousin and Lieutenant Anhuset.   He obviously already finds beauty in the Kai but Anhuset finds his interest disconcerting.

Personally, I think I am going to hold off until it is finalized and released but I will definitely come back to this series.  I do have a copy of In the Darkest Midnight which was part of the anthology Amid the Winter Snow.  I didn’t finish any of the stories besides Thea Harrison’s because I had a hard time jumping into the worldbuilding for the other authors, but now that I have been introduced to the Wraith Kings universe, I think I am going to dust that one off.

Serovek Pangion, the Baledine Margrave whose lands bordered Saggara, had assured Brishen that to human eyes, Ildiko was pretty. Beautiful even. To the Kai, she was ugly, and he’d received numerous pitying glances and overheard an equal number of whispers about how regrettable it was that the handsome Kai herceges was given such an uncomely creature to wife.

His gaze followed her as he listened with half an ear to his minister’s relentless drone. Lust surged in his blood. A day in her arms wasn’t enough for him, especially after a week spent away from her, knee-deep in mud, cow manure and blood. Surely there was some way he could spirit her away from the hall, out the doors and into the wild crowd that frolicked and cavorted under the light of a waxing moon. He’d dance her past the bonfires and revelers to a quiet spot where she could assuage his passion for her in the tight grip of her body while she serenaded him with soft moans.

Ildiko caught his stare over the shoulders of a duo of Kai who chatted with her. Her eyebrows quirked upward as he mouthed a desperate “Help me.” Her gaze flickered back to her guests; she laughed at something one of them said, responded with something he couldn’t hear and inclined her head in farewell before strolling to where he stood, his well-meaning ministers’ prisoner.

The vicegerents’ complaints faded at her approach. Each gave a low bow and polite “Your Highness” in greeting. She returned the salutations before turning her attention to Brishen. “My lord, please forgive the interruption, but I seek your advice on a matter that’s come to my attention.” Brishen clamped his lips tight against the laughter threatening to escape. As she spoke Ildiko’s right eye slowly drifted toward her nose while her left stayed in place.

“It’s a small matter,” she continued as if unaware of the bizarre ocular motions or the stifled horror they elicited in her guests. “I promise to return you to your companions as soon as possible.” Her right eye snapped back to center and leveled a stare on the female minister to his left. The woman shuddered and audibly swallowed.

Brishen choked back a gasp of his own when Ildiko partially closed her right eye but kept the left one open. The eye rolled in a slow circle and repeated the action as if chasing a speck of dust stuck in the white sclera. Judging by the shocked silence and stiff postures of the vicegreents on either side of him, they were repulsed as he was.

Muttered assurances that she wasn’t interrupting and to take all the time she needed prefaced a flight toward the open doors and the sanctuary of the loggia where human women with chameleonic eyes didn’t lurk to seek them out for casual conversation.

Ildiko watched the vicegerents flee until they were lost in the darkness beyond the doors. She turned to a grinning Brishen, her eyes steady and no longer capering about in their sockets. “And now we are alone. Was that the help you sought, love?”

He pulled her into his arms, hands splayed across her back and hip. “That was the most grotesque and formidable performance I’ve ever witnessed.”

She “harrumphed” and tapped a finger against one of the ivory claps that closed his tunic. “I’ve been practicing. And it’s only grotesque because you’re Kai. Had I done that to another human, they would have either laughed or ordered me to stop acting childish.”

“My savior,” he murmured against her cheek. “You’ve frightened my vicegerents and rescued me from an evening of dull complaints. What payment can I offer you?” He leaned back and wiggled an eyebrow. “Gold? Jewels? My body?”

Ildiko traced the pattern of embroidery decorating his tunic sleeve. Her lashes, a darker red than her hair, shielded her strange human eyes for a moment. “Hmmm, that is far to difficult a choice, therefore I choose all of them.” The lashes lifted, and Brishen didn’t mistake the mischievous gleam in her black pupils. “For now though, you can repay me with dancing. Nearly all of Saggara is outside celebrating, except us. This is my first Kaherka festival, and I don’t want to miss it.”

She didn’t need to say it twice. Brishen meshed his fingers with her and strode toward the doors, wearing a scowl he hoped deterred anyone from stopping him. Ildiko jogged behind him, laughing and admonishing him to slow down. 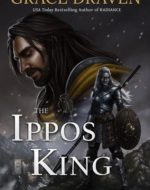