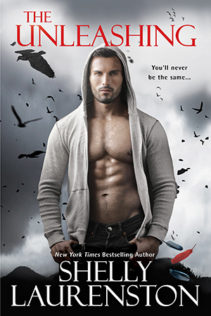 The Unleashing (Call of Crows, #1) by Shelly Laurenston

[box style=”rounded” border=”full”]I am giving this story 3 stars with a caveat. This was a hard book to get through since author Shelley Laurenston is using a lesser known Pantheon, Norse Mythology, as the basis for her story. There was too much set up and yet not enough, and not enough focus on the two main characters. Lot of interesting characters were introduced but it feels like it will take several books to really get into this series. [/box]

Unless you have a degree in Norse Mythology, there will definitely be a learning curve to this series. In setting up the rules for this new world, Shelly Laurenston needed to spend a good deal of time explaining the basics of Norse gods while still introducing our main characters. It is a little hard to explain why I believe she gave us too much and yet not enough set up, but I will try.

We get a basic overview of a few of the Gods who created the various Clans and some clans are only introduced as a name, but we do not yet know anything about them, such as “Holde’s Maids.” They are mentioned but we don’t know who they are, which God created them, or what their purpose is.  The groups that were introduced, we did meet several members of each.  A good deal of the story was dedicated to giving an overview of the mythology being introduced and attempting to drag you into this world.  Laurenston uses the premise of the new girl to introduce everyone to what is going on.  While we were overwhelmed with a basic foundation and lots of names to learn, there was no in depth discussions on the dynamics between Clans and gods, except to state the nobody trusts or likes the Crows.

Unlike the other Clans who trace their lineage back through to their Viking ancestors, Crows are created by the Goddess Freyja who collects her warriors among the dead souls of strong women and offers them a second chance at life, as long as they fight for her when called upon.

We were introduced to a lot of the base characters who will be starting us off in the series and I felt like I should have been taking notes to remember them all.   It was a lot of information but I still left feeling like I wasn’t up to speed.

So far all the various missions they were sent on revolve around the gods losing enchanted jewelry which keeps falling into the wrong hands and which someone is trying to drag a banned god into this dimension. If Skuld and Freyja would just get themselves a secure jewelry box, there would be no plot at all.

Obviously, the main focus of story will be the Crows and their “brother” Clan, The Ravens. It would be the equivalent of a college Greek House and their sorority sisters. The Crows do act like a sorority house since the house is in L.A. and the only ones we really meet are the Crows who are more fluff than warrior. These are the actresses and models hanging around the house waiting for callbacks. The Crows with more serious jobs are working and not hanging around the house. Same goes with the Ravens, except that Vig is a craftsman who makes all the weapons for the Clans and even sells some online. He is more the gruff, quiet loner who Kera originally mistakes for a wounded vet with PTSD.

As far as the romance, Kera and Vig knew each other from before her transformation and once she understands that his is not a traumatized, homeless vet, she notices how attractive he is, etc., etc.  He also fills in the blanks and introduces her to her new existence since the Crows don’t want to bother. They are good together, but don’t get much spotlight in their own story.

The most questionable plot point is the fact that these warriors are not immortal.  Not only will they grow old, but they can be wounded in battle and die.  They have faster healing abilities, but this should lead to a huge turn around of new warriors since they battle each other quite often with knives and swords and Thor’s group uses hammers and will smash your head in.

What is noticeably missing is Shelly Laurenston’s standard humor. There just wasn’t enough time to set up the world, introduce us to everything via “the new girl”, give us a romance between Vig and Kera and still figure out the subtle jokes from each different character.

I believe that this series will eventually be just as enjoyable as her others, but it will take time to lay out all of the foundations of these various clans and learn all the characters and dynamics between the groups. Where in a vampire/shifter series we understand the basic premise and all we need to know if your vampires go out in the sun or do your shifters need a full moon to shift, here she is giving her own spin to a little known mythology and we will all be taking the quiz at the end.

If you think you can hang on for the next few books, I am certain this will become just as popular as her other series and eventually her writing style will be able to shine through.

Vig is teaching Kera how to fly…

Vig grinned. “Told you. I’m going to pull away now.”

Her eyes snapped open. “You are?”

Vig’s wings pulled him back, away from Kera, his arms slowly moving way from her completely.

At first, she started to drop a bit. But she closed her eyes, relaxed her body–and probably her mind–and her wings took over, carrying her higher.

Vig let Kera hover there for a few minutes. Let her get used to just that movement. But he had faith in her and her commitment to making things happen now.

“I thought was was flying.”

“You’re hovering. And hovering is really important. But now you’re going to fly.”

“First you’re going to go higher. Then, you’re going to lower the front of your body and raise your legs out, arms at your sides. Keep your wings moving and you’ll see that they will go forward and back, using the air to push you forward. In scientific terms–“

“I don’t do science, so don’t even finish that sentence.”

“Okay. You want me to show you first?”

“No.” Kera closed her eyes, took in a breath, let it out. She did that several times, then she shot straight up. Vig followed, watching her closely, ready to grab her if she started falling back to the ground. But she didn’t. Instead, she followed his directions perfectly and suddenly…Kera was flying. Her body cut through the air and she sped off.

Vig rushed to catch up with her, watching as she flew. She abruptly turned in midair and came shooting back toward him. Her wings brushed against his face as she passed him. He turned and, again, followed her. But Vig quickly realized he didn’t have to anymore. Kera was moving on her own and completely comfortable.

He stopped, hovering right over the Raven house. A few of his brothers returning from a hunt paused by him.

“What are you doing?” one of them asked.

In answer, moving like a missile, Kera shot by them. Even better, she was laughing.

“We’re under Crow attack!” one of the brothers cried out.

“We’re not under Crow attack,” Vig quickly told him.

“Then what is she doing?”

“Why is she doing that here? Over our territory?”

“Because I’m helping her out.”

Another brother laughed. “Helping her out. Nice, Rundstöm.”

Vig crossed his arms over his chest and stared at his brother until the Raven eased back.

Kera crashed into his back, her body right between his wings, her legs around his waist, her arms loosely wrapped round his neck, her chin on his shoulder.

“Hi!” she greeted the other Ravens, sounding happier than he’d ever heard her. “I’m Kera.”

“The new girl,” his brothers replied.

Vig growled and his brothers eased back.

“It’s all right, Vig,” Kera said. “I was warned I’d be asked this question. Knife to the chest.” She patted Vig’s chest. “Right up to the hilt. It was most unpleasant.”

Kera pressed her face against Vig’s. “I’m sorry. Were you two together?”

His brother rolled his eyes. “No. I like a guy who’s a little more fem.”

Kera laughed and released her hold on Vig, dropping back, and then shooting off. Vig watched her go before looking back at his brothers. They were all gawking at him.

“What?” he finally asked them. “What are you all staring at?”

“Did you just make a joke?” one asked.

“Not really.  I’m funny. But you’re not actually known for funny. You’re know for being…ya know…Swedish.”

“My people have a wonderful sense of humor.”

“If you’re not going to take this seriously,” his brother said, shaking his head as the others headed to the house, “we’re just going to end this conversation.”