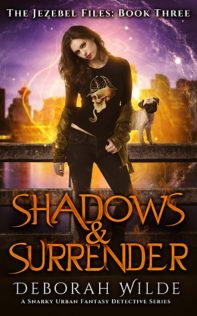 Ash wanted a career filled with challenging mysteries.She should have specified she didn’t mean her family.
When a murder scene reveals a connection to Ash’s father who abandoned her when she was thirteen, she's stunned. He may be the key to stopping Chariot from achieving immortality.
The catch? He could be hiding anywhere in the world.
To make matters worse, Levi, Ash's romantic entanglement and brand-new boss, has his first official case for her: helping his ex-girlfriend, a.k.a. Ash's childhood tormentor.
No one ever said adulting was easy.
As secrets multiply and alliances get deadlier, Ash's investigation takes her back into Hedon and into her own past. Cracking this case could reunite her family... or cost her everyone she holds dear.
Actual ghosts have nothing on the ghosts of her past.


Ash is a perfect Urban Fantasy heroine; strong, snarky and will face any danger to protect those she loves.

Note:  This really doesn’t work well as a stand alone as we have been building the arc of the story since book 1.   While I am distracted by some similarities to the prior series, The Unlikeable Demon Hunter, I definitely like this series better. Also as this is book 3 in the series, it is getting very interesting, we are getting answers and I was up until 1:30 on a weekday because there was just so much going on that I didn’t want to stop. I want you to remember this as what I am going to discuss is nitpicky.

It is hard to give a real breakdown of this story plot since there are so many things going on.

The problem with reading more than one series by an author is that you see the similarity in characters or writing style bleed over from series to series. And this isn’t just newer or independent authors either. I have taken a break from Nora Roberts (except for her JD Robb series) because all I can think about is this is just like the last trilogy or this is an early draft of Roarke. While I believe Deborah Wilde has taken the better parts of her Unlikable Demon Hunter series and improved on it, we still have the same commitment phobic issues in just about all the characters as well as…I can’t even call it a roller coaster of a plot. It is more like watching a heartbeat on a monitor. It jumps up and down, high highs and then crashes down.

Let’s hit the easy part. The romance between hot and powerful Levi Montefiore and Ashira Cohen. From the get-go, they are painted as former enemies who met at Jewish summer camp as teens, and only summer camp as there doesn’t seem to be any school or social interconnection between them as kids. Now, Levi seems to warm up to Ash a lot faster than she to him. Levi was always showing up to check on her, every time she so much as scrapes her knee. While it hasn’t been confirmed, it almost seemed like Levi’s antagonism in summer camp was like the little boy who throws rocks at a little girls so his friends don’t realize he really likes her. He comes off at the beginning of the first book as having the same level of dislike for Ash but he seems to turn that around very quickly from the start. Problem is in our heartbreak plotting, while he has been pushing towards more than hot, quickies where Ash is halfway out the door before the condom hits the garbage, he is the first one to pull away when things go sideways. He goes from freaking out when she gets hurts to I don’t think this is going to work out in a blink. How are we in this together and then suddenly not.  And Levi and Ash aren’t the only ones in this series with commitment issues.  Beep…beep….beep…

Levi and Ash both have Daddy issues and issues with their mothers as well.  Ash’s mother is also the biggest backer for the movement against having Houses who oversee people with magic.  She is proposing a bill to have those Houses dismantled and control over Nefresh given to the Mundane government.   Her mother has some issues of her own as her husband was a Charmer.  Whether this is what drives her dislike of Nefresh or not, we aren’t certain but even knowing her daughter now has magic, her mother insists that Ash play politics and show a united front with her political aspirations.    I can’t make up my mind if her love for her daughter or her hate for Nefresh will win out in the end.  Beep…beep…beep…

Ash came into her Jezebel powers accidentally after a fall in the first book destroys a tattoo which was suppressing her magic.  As a Jezebel, she has an Attendant who supports her.  Rafael does not think that Ash is worthy of being a Jezebel, mind you the last one was taking drugs to suppress her ability, but hey, that’s okay, Ash being brash is not.  He hates her but they figure out that “ingesting” his magic helps Ash when she is being overwhelmed by powerful magics.  The side effect is that if give them both a sexual high, which makes everyone, including Levi, uncomfortable and makes Rafael dislike her even more.    Of course, we find this out right after Rafael  finally starts to think that Ash isn’t so bad, so beep…beep…beep…

We also have Ash going to Hedon, a dimensional portal run by the Queens of Hearts. Ash is trying to win over the Queen, who is super powerful in this dimension. Entrance to Hedon requires the Queen to get a good look into your heart, which helps her know which buttons to push with each guest. She also has fast rules which, if broken could get you thrown into the dungeon, beheaded or turned into a lawn statue in the main garden. But every time Ashira thinks that she is winning over the Queen, she either gets mind-fucked or simple gets a hairsbreadth away from a beheading before she manages to backpeddle and get another pass.    I understand this is all part of plotting the story, but while there is no question that Ash is brave and strong, she also takes some pretty stupid steps most of which leave her that hairsbreadth from death.  Beep…beep…beep…

You said you liked this book, right? Yes, I liked it!   I just find it a bit frustrating since some of the plot points seems very convoluted. Such as visiting her father’s friend, Uncle Paulie, who she hasn’t seen since her father abandoned them but it isn’t a matter of simply seeking him out. He lives on a private island off the coast of Antigua which a private army and a magic null surrounding the island. We jumped through a lot of hoops just to see this guy and get a scrap of information. It seemed a little over the top and truly not necessary.   He could have simply lived in a mansion in a remote area of Canada with the same private guard.  It was a lot of time wasted and not really needed to further the story.

I like Ash and Levi and many of the secondary characters in this series.  I like the world building and I am invested in the this story.  But there are just so many things going on here.  I know that once we get to the end, it will all coalesce.   I just wish that I didn’t feel like it was all over the place and every time we are starting to get somewhere, the whole house of cards keeps crumbling down.

After rescuing the animal, Ash ends up taking a little dog home, but keeps insisting she will be getting rid of it because she is not a dog person. Her friends know her too well.

Priya wrinkled her nose at the shut door, then crouched down and held out her hand. “Is this supposed to be a guard dog?”

“She’s a temporary visitor. I wouldn’t get a pet without speaking to you first.”

The pug sniffed the outstretched hand, then warily nuzzled her nose into Priya’s palm. “Does she have a name?” Priya asked.

“Mrs. Hudson.” I waved my hands, hoping to avoid further questions. “Look, it was the only thing I could think of on the spot and the vet needed something quick.”

“What’s the dog’s name?” Levi said. Mrs. Hudson had allowed him to scratch her ears.

“Mrs. Hudson,” Priya said in a tone of unholy glee.

Levi threw back his head and laughed, his blue eyes dancing. The husky sound shivered down my spine. He was the devil. “Hope you like your new roommate, Pri. I believed Miles when he said that Ash didn’t intend to keep the puppy, but Mrs. Hudson? You’re not going anywhere, are you girl?”

I picked her up and put her in my lap.

“Ash can’t keep a cactus alive. Mrs. Hudson is going to be mine.” Priya burst into evil cackles.

Then she and Levi fist-bumped. Fabulous. This day could not get worse. Or so I thought.