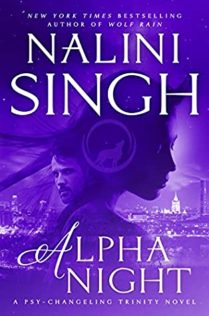 New York Times bestselling author Nalini Singh returns to her breathtaking Psy-Changeling Trinity series with a mating that shouldn’t exist…
Alpha wolf Selenka Durev’s devotion to her pack is equaled only by her anger at anyone who would harm those under her care. That currently includes the empaths who’ve flowed into her city for a symposium that is a security nightmare, a powder keg just waiting for a match.
Ethan Night is an Arrow who isn’t an Arrow. Numb and disengaged from the world, he’s loyal only to himself. Assigned as part of the security force at a world-first symposium, he carries a dark agenda tied to the power-hungry and murderous Consortium. Then violence erupts and Ethan finds himself crashing into the heart and soul of an alpha wolf.
Mating at first sight is a myth, a fairytale. Yet Selenka’s wolf is resolute: Ethan Night, broken Arrow and a man capable of obsessive devotion, is the mate it has chosen. Even if the mating bond is full of static and not quite as it should be. Because Selenka’s new mate has a terrible secret, his mind surging with a power that is a creature of madness and death…

Nalini Singh gives us our first powerful female in this latest Psy-Changeling story.

Psy Arrow Ethan Night has seen the world in a grey filter until he literally crashes into BlackEdge Alpha Selenka Durev and her wolf takes an opportunity to mate with this quiet Arrow on the edge of oblivion.

Ethan keeps to the fringes and is reserved even by Arrow standards. But unlike the rest of the Arrows, who were trained together, the former arrow leader Ming LeBon kept Ethan separated in order to train his unique ability to control light to be used as a weapon. Ethan had no desire to kill for anyone so Ming tortured and punished him by shutting him in a lightless room. Even after Ming was removed as the leader, the other Arrows didn’t even know who Ethan was or that he was kept imprisoned in such a torturous way.  Aden has tried to make the Arrows into a family and has worked especially hard to include Ethan, who never even knew compassion let alone friendship.

While assigned to protect the E’s at a symposium, Ethan crashes into Selenka to protect her from an attack.   She then gets hurt returning the favor by saving Ethan from a gunshot and for the first time ever something inside Ethan blossoms into full color.  He has never had anyone try to protect him before.  Mating at first sight is the stuff of fairy tales and soap operas, but when Selenka’s wolf suddenly claims Ethan as her mate, he couldn’t be happier with the situation although the bond hasn’t snapped together perfectly.  Something is interfering with the mating bond and Ethan believes that is the fact that he is mentally damaged.  Ethan also believes that the pressure building inside him is Scarab Syndrome, where a sudden increase in psychic abilities causes violent outbursts and delusions of grandeur.    He doesn’t believe he has much time left before the pressure in his brain bursts free and he has already requested that Aden take care of him before he becomes a danger to those around him and the already fragile Psy-net.

Now I know it seems odd in a series where most of the characters have teeth and claw or powerful psychic abilities to say this is the first powerful female, but I can’t think of another book in the series where the female lead wasn’t somewhat submissive to the male lead once their romance was set in stone, or in cases like Silver Silence, where they were both very powerful in their own way.   All the women in this series were strong women, but generally, it was the male who was the protector and took the lead in most matters and 99 percent of the time, she defers to his wishes and dominance.   Here, Psy Arrow Ethan Night often defers to Blackedge Alpha Selenka Durev to make the decision of what to do next, and several times refers to himself as the Knight to her Queen.  He puts himself between Selenka and danger, just like her lieutenants would, but he would neutralize that danger and wait for her decision of whether someone would be killed or simply punished.

This is was a very important distinction because Selenka is an Alpha, one of the few female alphas we have been introduced to with except, I believe, maybe the Blacksea changelings, and it would diminish her standing as Alpha is she was suddenly submissive to a mate, deferring to his every decision.   While having a submissive mate isn’t bad since the submissive wolves play an important part in the pack, it wouldn’t be a good dynamic for an Alpha to have so much forced control over her mate.  It would be a very unbalanced power dynamic.  Ethan was strong and lethal in the way of the Psy especially an elite Arrow, but his strength didn’t challenge her standing as the Alpha especially as he was the one who kept offering himself as her knight, or as a subordinate member of her pack.

There are moments where his new found devotion come off as almost fanatical or obsessive, and I can only wonder if that is borne of his traumatic upbringing.  This is the first time that Ethan has felt love and inclusion and as a mating bond isn’t breakable, Ethan throws himself in into the devotion of hew new mate.

I love Alpha Night and really enjoyed seeing this take charge Alpha female hold her pack with love and strength and you can easily see how she can hold her own territory against the likes of Kaleb Krychek and Valentin Nikolaev.  Great story and certainly a worthy addition to such a fabulous series.

Realizing she was far more shaken than she’d consciously accepted, she gave herself half a minute to bend over, put her hands on her knees, and exhale hard.

Her head rung, her veins kissed by cold night.

Margo, of medium height, with large breasts Selenka had envied as a teen, sleek muscle, and the thickest, silkiest blonde hair in the universe, said, “Whoa.”

“Have you met Mr. Tall, Dangerous, and Smoldering before?” Margo put a hand on Selenka’s shoulder, the contact instinctive between packmates. “It’s a serious breach of the girlfriend code to hide snacks like that.”

Listening to her, you’d never know Margo was Selenka’s security specialist and so lethal even the bears didn’t pick fights with her. The pushy, often aggressive creatures gave her a wide berth–and constantly sent drinks and hopeful looks her way when she went out for a night. The last time it had happened, Margo had deigned to dance with the six-foot-tall bear soldier who’d sent her a cocktail.

The other woman had looked scared but delighted.

Ethan wasn’t scared of Selenka. Not even for a second.

Rising to her full height on a wave of primal satisfaction, the wolf smug in its choice of a mate, Selenka shook her head. “I’d barely spoken to him before it happened.” Though physical attraction had never been in question. The embers glowed, hot and dark, deep in her belly, ready to engulf her at the slightest encouragement.

Getting naked with her mate was not going to be an issue.

Margo’s eyes widened, her hands flying to her mouth “O Bozhe! You’re just like Chantelle and Ridge from Hourglass Lives!

But her tough-as-granite security specialist was all but dancing on her work-booted feet, her blue eyes bright. “I can’t! A real-life mating at first sight?! All my fan-forum buddies will just die!”

Narrowing her eyes, Selenka pointed a finger at her best friend and only then remembered little Zhanna had decorated her nails with tiny stickers of big-eyed cartoon cats. “This goes nowhere near the forum.”

“Yes. He lives in me now.” What she couldn’t explain to Margo was the sense of wrongness tied to the mating, the static she couldn’t hear but could feel–as if the bond was skewed slightly out of time. “We’ll talk more later. I have to go deal with the assailants.”

Margo transformed from soap opera addict to ruthless security specialist in the blink of an eye. “I made sure that area is secure. We’ve also checked everyone for weapons and verified that the only ones with them are part of the security team. Hall and surrounds are secure.”

“You have enough people to escort the Es to their hotels?”

“With the bears”–a roll of her eyes–“the Arrows, and that team of Krychek’s, we’ll be fine. I’ll handle all peripherals while you deal with the major issue.”

“Thanks, Margo.” Selenka deliberately brushed against her friend as they passed; she needed the touch of pack.

Margo waited till she was halfway down the corridor before whispering at a volume only Selenka’s wolf ears would pick up, “I’m going to speak to your Ridge.”

Since sending Margo a glare would only increase her friend’s determination, Selenka just wished Ethan good luck. Margo could pry tears out of a stone. It’d be interesting to see what she’d get out of Selenka’s Arrow. Because however their mating had come into being, and regardless of the fog or static or whatever it was that was messing it up, he was hers now.

Her hand locked into a hard fist, and she had to force it open. She had no sympathy for anyone who would treat a child with such brutality that the child had to kill in self-defense. And now that child was a dangerous, beautiful man who spoke of himself as if he were a cracked object, broken and of questionable–if any–value.

Selenka bit back a growl as she turned the corner.

Valentin, who’d apparently paused when he heard her coming, lifted both eyebrows. “I pity your mate, if that’s your mood,” he said. “What did he do?”

Blin!  Of course another alpha would’ve picked up what happened. “Do not say a word to anyone until I have a chance to tell my pack,” she growled.

“What do you think I am?” Valentin grumbled back. “I can keep secrets. Except from Silver.” He grinned, utterly delighted with himself for having the director of EmNet as his mate.

Selenka would find it insufferable if her wolf wasn’t posturing back as hard. “My mate is an Arrow.”

“Silver could take him.”