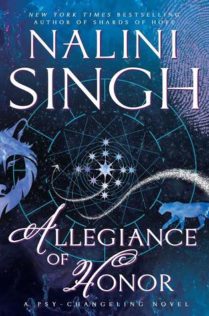 Silence has fallen and the time of the Trinity Accord has begun.  Members of the Changelings, the Psy and the Human Alliance are all coming together under Trinity to make the world a better place for everyone.  It is the first step towards creating a United Earth Federation where all of the creatures on this planet will work together.   The world of the Psy-Changeling series is taking a turn towards peace so it is only appropriate that as factions work together for the first time in over 100 years, that all of the characters who have been presented to date (both novels and novellas) take time to make their presence known once again.

This is a true ensemble book and no couple is featured more predominantly, there are several topics which are focused on during this novel.   Several factions have signed the Trinity Accord which was put together by the arrow, Aden, wherein all the members agree to work together to keep communication open between the different groups and which begins to set up working and business relationships between the groups.  The Consortium has not gone away nor have we been able do determine who is the hidden leader of this group.

One of the biggest concerns is little Naya, the first psy-changeling child to be born.  There are those who want to destroy her for the change she represents and those who want to grab her to control her and her powerful father.

The Es have done a lot to help heal the psy-net but it is still fragmenting and Kaleb, Ivy and Sascha are doing what they can to try to figure out why this continues to unravel and if it can still be saved.

The Human Alliance, Snow Dancer, Dark River, and the arrows all work together to help Black Sea try find a missing changeling.

Several other mysteries and issues will be brought up again, including Father Xavior’s search for his Nina, and several matters will finally find a satisfying conclusion.

THOUGHTS:
This series is far from over but this novel gave us a chance to tie up loose ends and also gave us a pivot point to change the focus of the series.

I liked how the last portion of the novel was a party set between Snow Dancer and Dark River to welcome the pupcubs into both packs.  This party also included special guests who have become important allies to the pack such a Sahara and Kaleb, the Arrows and some of the Human Alliance and Forgotten members.  It showed a real blending of the different groups as well as pointing out how far the series has come from where all the parties started in Slave to Sensation.

A very moving scene for me which shows the difference and changes to this world was when the leaders of the Rat changelings arrived at the party.  The two leaders arrived first, fearing that the invitation to the party was just subterfuge to get them into neutral territory and wipe out the rats.  Even though there was a truce between DarkRiver and the rats and they were allies of sorts, predatory changelings usually don’t like others in their territory and the rats didn’t all arrive together for fear of the double cross.   When they finally realized that there was an actual party and they were being welcomed  by both packs, the second in command breaks into tears over the fact this his daughter would be growing up in a world where there truly could be peace among the races.

This was a wonderful group effort and it definitely was not an ending of the series but only an ending of an arc.  I am looking forward to seeing what comes next.

Picking up the organizer, she walked into the living room. She’d watch over Naya while Lucas showered, then put away work for the day. But first she had to reply to an — “Eep!”

She jumped at the feel of something biting her ankle, glancing down just in time to see a furry black head disappear back under the small pink play table next to her. Eyes wide, Sascha tiptoed closer, was about to look beneath the table when she felt a deep need to do this with her mate by her side. “Lucas,” she whispered, reaching for him through the mating bond.

The shower shut off a heartbeat later, and then a dripping Lucas, white towel wrapped around his hips exactly as she’d imagined, was walking out. “What’s the matter?”

Sascha just pointed to the table and waved him down onto his knees. Awareness dawning in eyes that rapidly went from human to panther, he came down beside her. Then, together, they both pressed their weight onto their palms and looked under the table Naya like to use to put her toys on when she was “tidying.”

Bright green leopard eyes glowed at them before a tiny panther cub bounded out into their arms–or tried to. She wasn’t very coordinated, more slid across the floor than ran. Pride burned in her eyes, in her mental presence, in her growling.

Lucas growled back, chuckling and rubbing Naya’s little head when she tried to pounce on him. Her concentration that of the very young child she was she then turned to Sascha and tried to climb into her lap, Sascha having sat up on her knees. Sascha’s heart had burst open at the first sight of her child’s new form. Jet-black like her father except for those bright green eyes, her leopard rosettes hiding in the black, Naya was astonishingly beautiful.

Fighting happy tears, she said, “Clever, clever girl.” She’d been told changeling children shifted around one year of age, and with Naya’s birthday a bare week away, Sascha had been watchful–but she’d thought she would feel a mental change when Naya shifted for the first time. “Why didn’t I feel you shift?”

“Because it’s normal for her.” Lucas turned over onto his back on the play mat, uncaring of his wet state.

Taking the silent invitation, Naya immediately ran over to climb laboriously onto his chest. She had to rest afterward, her tiny body heaving up and down under Lucas’s hand. Once recovered, she stood on his chest and tried to bat playfully at his face. He deflected her with gentle hands, but in a way that told Naya it was all right to continue this game. “She’s always Naya, whatever form she takes.”

“But when you shift, you feel wilder.” Sascha didn’t know how else to explain it.

“She’s a baby, closer to her primal state.”

Naya looked up and purred when Sascha petted her, then fell flat on her belly, legs splayed out. Sascha helped her get back on her feet, where she once again started to “fight” with her father, safe in the knowledge that Lucas could easily handle her mock-attack.

“No claws.” Lucas caught one small paw and tapped on the claws.

When Naya made mewling sounds, claws still out, Lucas released his own claws, then retracted them. One second, two, three, Naya’s head tilted to the side…and her claws slid back in. “Good girl.” Lucas kissed her face.

2 responses to “Review: Allegiance of Honor by Nalini Singh”