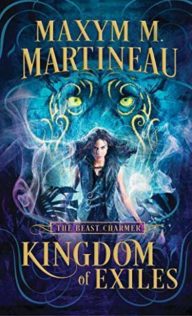 Kingdom of Exiles (The Beast Charmer, #1) by Maxym M. Martineau

Exiled beast charmer Leena Edenfrell is in deep trouble. Empty pockets forced her to sell her beloved magical beasts on the black market—an offense punishable by death—and now there's a price on her head. With the realm's most talented murderer-for-hire nipping at her heels, Leena makes him an offer he can't refuse: powerful mythical creatures in exchange for her life.

If only it were that simple. Unbeknownst to Leena, the undying ones are bound by magic to complete their contracts, and Noc cannot risk his brotherhood of assassins...not even to save the woman he can no longer live without.

You will be enchanted by this new Beast Charmer series.

In an compelling new fantasy series, we meet Leena who is a beast Charmer. Her people can naturally charm and bond with beasts. But Leena has been banished from her homeland after being falsely accused by the man she loved of breaking their most sacred law never to charm the most cunning beasts of all – humans.

Leena refuses to live her life in the shadows for something she would never have done.  She has plans to charm one of the most elusive beasts, a Class A beast, who would prove her worth and her innocence so she could go before the counsel once again and this time be heard over the charming lies of her ex-love.

Her plans are upset when she finds out the hard way that someone wants her out of the way bad enough and has hired the Cruor, assassins raised from the dead and who cloak themselves in shadows.  They are such silent killers that their victims fall before they even know death was stalking them. They never fail to kill their target since they are magically bound to a contract. If they don’t make the kill, they die themselves. But the Cruor have never come up against a Charmer like Leena before and she uses her beasts to thwart her assassin and make him take her to his stronghold. Leena knows that the Cruor will never stop until she is dead. Her only means of survival would be to buy her way out of the contract.

But as Cruor have never had a target like Leena, Leena has never come upon anyone as cunning as their leader, Noc. He agrees that none of his men will fulfill the contract on Leena if she give him and his friends four beasts, never letting her know that he has taken on the contract himself and once she captures the beasts, Noc himself will dispatch her. If he doesn’t kill Leena, Noc will die.

Leena convinces Noc to take her toward the legendary beast she is looking for and she will charm beasts along the way for him and his men. The problem is that the more time Noc and his men spend with Leena, the more they come to like her.  There are too many secrets and too much danger to the Cruor if they don’t fulfill their contract, but how do you kill someone who has become one of your family?

The story it noted as a cross between Assassin’s Creed and Fantastic Beasts but it takes the basic ideas and makes a story all its own. I liked Leena and her beasts. I liked Noc and his men. I had a hard time with Noc and Leena’s romance since Noc is under a curse and anyone he loves and who love him in return, falls ill and dies. So Noc is very cold and aloof to everyone, including his men, to keep them safe.  This makes it hard for the romance to gel. Anytime there might have been feelings growing between them, Noc pulled back to protect her from the curse and leaving Leena feeling like a fool.  She didn’t know how to feel and I had a hard time getting behind their romance. I kept wanting her to skip Noc and move on to Oz who was big and intimidating but actually very sweet and who was kind to her from the beginning.  I enjoyed the bond between Oz and Leena and we had to go pretty far into the story for me to ship the right romance, but  I still liked Oz.

There was great world building and we are introduced to some very interesting creatures. While it is not really a cliffhanger, this is the first of a trilogy so there will be some unfinished threads dangling at the end of the story. I definitely want to see where this story takes us.

“Here’s how this is going to work.” Pivoting to face him, I cracked my knuckles. “You need to stay right next to me. I’m talking inches. Keep yourself hidden until I call you out. And when I do, push me to the side and touch the Effreft as fast as you can.”

Calem narrowed his eyes. “I’m not going to push you.”

“I’m serious. Effrefts bond immediately. It’s not normally an issue for Charmers, but since I plan on handing off the beast to you, you’ll need to be its first point of contact. If it see me first or otherwise associates me as its master, I can’t give it to you. Breaking a permanent bond between beast and master could result in the creature’s death and I won’t risk that.”

I placed my hands on my hips daring him to contradict me. Shifting in place, he rocked on his heels. The muscles along his jawline ticked as he weighed his options.

Red eyes skewered me. “That’s what I’m afraid of.”

“This is the beast I want to give you,” I said. He studied my face for what felt like hours before relenting, dropping his hand to his side and taking a careful step in my direction. Sinking to the ground, I positioned my butt on the soles of my feet, laying my hands palm up against my thighs. “Get behind me.”

Low and dark, a chuckle escaped from the back of his throat. “I think I’ve been waiting all my life for you to say that to me, Leena.”

A blush ravaged my neck. He crouched behind me, the heady scent of cinnamon thick in the air, and his breath tickled a loose stand of hair on my cheek.  Shadows pulled from the earth, flooding the space behind me and hiding him in their void. His scent disappeared with the breeze, and I was left alone.

“Here we go.” Lips pressed into a thin line, I willed my power to the surface. Glowing bright to compete with the moon, my skin radiated warmth. An hour ticked by to the steady hum and vibration of energy within me. I could lure the night away on a full tank, but if dawn claimed the sky before the Effreft appeared, it wouldn’t matter.

A mint-green streak of color dropped from the sky, barreling toward the cornucopia and landing with grace atop the pile of food. It’s falcon-like head cocked to the side. Curious eyes rounded on me, pale pink and so endlessly intelligent. The Effreft snapped its beak, and a soft inquisitive chirp filled the air.

She was perfect. I intensified the glow within me, and the pointed ears atop her head twitched. Carefully, she stepped forward. She was built like a small dog with a long and thin feathered tail, and the powerful muscles in her legs contracted as she walked. Talons skewered a piece of meat, and she paused to gobble the morsel.

My mind recoiled at the thought of him. With my body shuddering, the glow radiating from my being dimmed before recovering to full blast. The Effreft stilled, foot frozen in midair.

“Effrefts are flighty creatures. You must be stable.”  Wynne had bent low behind me, lips grazing the side of my neck as he placed both hands on my hips. His Effreft had sat before us, light eyes trained on her master.

Before the gods cursed my happiness to hell.

Gooseflesh covered my body, and I speared my bottom lip with my teeth to pull my mind back to the present. Blood pooled in my mouth. It’d been so long since I’d allowed myself to think of those warmer moments with Wynn. I’d buried his existence so far beneath the surface, and yet my conversation with Noc had all my walls crumbling. His strength, his cunning, his quiet prodding that was somehow both infuriating and welcoming…

The Effreft stretched her wings to the sky, testing the wind. My eyes snapped to hers.

No. I need to tame her. I needed to end this deal and get out. Steadying myself, I bent further into my crouch, submitting to the creature fully.

She folded her wings and took a step forward, beak inches from my forehead. Light flowed from my being, temporarily blinding her and showering her body in unending waves of warmth. She knelt to the ground and pressed her head firmly against the earth. When she looked up, the first person she met would be her master.

Shadows shot outward, fleeing from his body and escaping into the night, and he elbowed me to the side. My face smacked into the dirt, and I pulled my knees to my chest, giving him as much room as possible. Before she could raise her head, he reached out and placed a gentle hand along the down-soft feathers of her neck.

She cooed, raising her eyes to him, and the bond was sealed.  Awestruck, Calem stared at his beast.  Eyes wide.  Lips parted, but slightly curled in the beginnings of a smile. His muted-red stare flared brightly like a ruby. The Effreft cooed, and she knocked her beak against his nose. Already totally devoted to her master.

I couldn’t help but grin. “Thank the gods.” I rolled to my back, eyeing the heavens. Adrenaline left me in a rush, and a cool shiver danced over me. “She’s all yours.”

Audiobook Review: Written in Red by Anne Bishop
« Spotlight: The Kiss Plot by Nicole French
Review: Sweet Wild of Mine by Laurel Kerr »