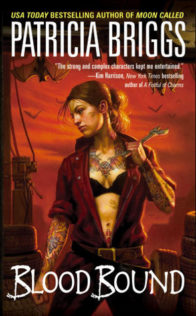 Under the rule of science, there are no witch burnings allowed, no water trials or public lynchings. In return, the average law-abiding, solid citizen has little to worry about from the things that go bump in the night. Sometimes I wish I was an average citizen…

Mechanic Mercy Thompson has friends in low places-and in dark ones. And now she owes one of them a favor. Since she can shapeshift at will, she agrees to act as some extra muscle when her vampire friend Stefan goes to deliver a message to another of his kind.

But this new vampire is hardly ordinary-and neither is the demon inside of him.

Mercy should have known that nothing is simple when dealing with vampires. She owed her friend Stefan a favor for helping her find Adam’s daughter, Jesse, when she was abducted. She knows she should have said no when the favor involved changing into her coyote form and putting on a studded harness. She definitely should have said no when he explained that he needed her to witness him warning a vampire who was trespassing in his seethe’s territory in case something unusual happened, since Mercy is immune to vampire’s powers. But how can another vampire enthrall a vampire of Stefan’s age?

Except there is more to the vampire they go to see. He is definite more than just a newly made vampire. There was a smell of oily evil that surrounded him—evil and death unlike anything she has ever smelled on a vampire before. That smell was enough to make Mercy want to turn tail and run, but then he enthralled Stefan and Mercy, stuck on a leash in coyote form, was forced to watch the vampire kill in blood lust.

Someone had turned a demon-possessed human into a vampire and let this creature with the strength of a vampire and the powers of a demon loose on the Tri-Cities. The vampires and the wolves are working together to find this killer because his slaughtering brings the attention of the humans. Now that the werewolves have joined the Fae in coming out to the humans, they know that the police will be looking at the wolves for the unexplained violence and deaths which are increasing around the city.

When Stefan, Adam and Samuel all go missing and Mercy’s friend Warren is found near death, Mercy is frantic to find them but doesn’t know who else to turn to since the Fae don’t want to get involved. Mercy is more surprised when she is summoned by the Mistress of the seethe. Marsilia thinks that Mercy would be able to defeat the demon. What does the Mistress know about Mercy’s Walker abilities that Mercy doesn’t. It has to be more than not be able to be enthralled by vampires since Mercy has only a little more strength than a human, and no healing abilities like a were or a vamp.

Mercy is going to have faith that Marsilia is sending her out because she wants to find Stefan and not just as a way to get rid of Mercy.   Mercy is willing to risk her life if necessary to get Stefan, Adam and Samuel back safely and destroy the monster before he destroys more innocent lives.

THOUGHTS:
I really like Mercy Thompson and her friends. The demon-vampire is really creepy, especially when he comes visiting Mercy.   Mercy gets a little help of her Fae mentor, Zee, and her human/cop friend, Tony.

We learn a little more about the vampires and their strengths and weaknesses so we do have some slower parts to the story while Mercy tries to figure out how to kill a vampire and where the demon-vampire is hiding and trying to figure out who created it.

Added to Mercy’s headaches is the fact that Adam and Samuel both want Mercy. Two dominant males vying for the same female makes tensions a little high around the three of them. Add to that a very interesting kiss from Stefan, who obviously has some feelings for Mercy as well. It keeps things a little interesting the romance department.

I am definitely enjoying this series.

“What did I do to deserve that look?” he asked.

“Why don’t I feel like obeying you now?” I asked.

He smiled at me and turned on the bypass highway that ran along the outskirts of Richland. It was four thirty and the road was clogged with traffic.

“Being the Alpha is different from just being dominant,” he said.

I snorted. “I know that. Remember where I grew up.”

“If I’m away from the pack, I can make the Alpha go dormant. Bran can do it whenever he feels like it, but for the rest of us, it takes real effort.”

I don’t know how he expected me to react to that, but it didn’t make me happy. “So it was deliberate, the way you made me feel?”

“No. I told you it takes an effort—and the…effect you have on me makes it difficult.” He wasn’t looking at me now. He was a product of his times. He might look like he was in his late twenties, but he’d been born just after WWII, and a man raised in the 1950’s didn’t talk about his feelings. It was interesting watching him squirm. I was suddenly feeling much more cheerful.

“I can’t help how I’m wired,” he said after a moment. “I don’t even know how much is being an Alpha werewolf and how much is just me—but being around you brings out the predator in me.”

“And so you had to make me want to please you?” I made sure he heard how I felt about that.

“No!” He sucked in a big breath and then said, “Please don’t antagonize me right now. You want an explanation. You want me to stop influencing you. I’m trying to do both—but it isn’t easy. Please.”

It was the “please” that got to me. I leaned my back against the door so I was a far from him as I could get. “Tell me, then.”

“Bran can control his Alpha effect until he can fool werewolves who don’t know who and what he is. I’m not so talented, but I can stuff it down so it doesn’t interfere with my everyday life. When I negotiate contracts, I don’t like to exert undue influence on the people I’m dealing with. Even in the pack, I don’t use it much. Cooperation is always better than coercion—especially when that coercion only lasts until they’re out of my presence. I only bring out the big guns when there’s trouble in the pack that can’t be solved by talking.” He glanced at me and almost hit the car in front of him when traffic stopped unexpectedly.

If my hearing hadn’t been so good I wouldn’t have heard him when he said, “When I am with you, my control is shot. I think that’s what you’ve been feeling.”

So he could command my obedience whenever he wanted to. Only because he chose not to do so was I left with my free will.

“Before you act on that fear I can smell,” he said more confidently, “I’d like to point out that you had no trouble turning Samuel down when you were sixteen—and he’s more dominant than I am.”

“He’s not an Alpha and I didn’t turn him down to his face. I left without talking to him.”

“I’ve seen you go toe-to-toe with Bran and not back down.”

He laughed. “I’ve heard you. Remember when Bran told you to be a good little girl and let the wolves deal with the scary stuff and so ensured that you would go out and find the bastard who’d taken Jesse?”

“I didn’t argue with him,” I pointed out.

“Because you didn’t care if you had his permission or not. The only reason you submit to me is because some part of you wants to:  I’m willing to admit that my being an Alpha brings that part of you to the forefront, but it is you who relaxes your guard around me.”

I didn’t talk to him all the rest of the way home. I was fair enough to admit to myself that I was angry because I was pretty sure he was right, but not fair enough to tell him so.

Being a master stategist, he let me stew. He didn’t even get out of the car open my door—which he usually did. I hopped out and stood with the door open for a minute.

“There’s supposed to be a good movie coming out,” I muttered. “Would you like to come with me Saturday afternoon?” I hadn’t intended to ask. The invitation just popped out.

He smiled, that slow smile that started in his eyes and never quite made it to his mouth. I shifted my weight uneasily becuase that smile had a unsettling effect on me.

I swallowed. This was not a good idea. Not at all. “The one behind the mall, I think. I’ll check.”

“Fine. Call me later with the time.”

“Okay.” His lips were curling up now.

Dumb, I thought, dumb sheep waltzing right into the slaughterhouse. I shut the door without saying anything more and went into the house.

Out of the frying pan and into the fire, I thought, meeting Samuel’s gaze.

“Going to the movies?” he asked, having obviously overheard what I’d said to Adam.

“Yes.” I jerked my chin up and refused to give in the tight feeling in my stomach. Samuel wouldn’t hurt me. The problem was, I didn’t want to hurt him either.

His eyes were half-shut and he breathed in. “You smell like him again.”

“He picked me up when I was running in coyote form, so he brought me clothes.”

Samuel moved with the speed of a boa constrictor and he put his hand behind my neck. I stood very still when he put his nose under my ear. I couldn’t help but smell him also. How could his scent have as powerful an effect on me as Adam’s smile? It was wrong.

“When you go with him,” he growled, his body trembling with readiness or pain—I couldn’t tell which because I could smell both, “I want you to remember this.”

He kissed me. It as utterly serious, beautiful—and, given the rage in his eyes when he started, surprisingly gentle.

One response to “Audiobook Review: Blood Bound by Patricia Briggs”