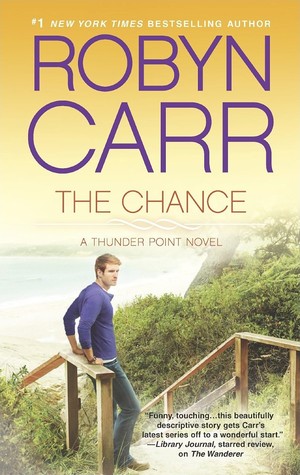 With its breathtaking vistas and down-to-earth people, Thunder Point is the perfect place for FBI agent Laine Carrington to recuperate from a gunshot wound and contemplate her future. The locals embraced Laine as one of their own after she risked her life to save a young girl from a dangerous cult. Knowing her wounds go beyond the physical, Laine hopes she’ll fit in for a while and find her true self in a town that feels safe. She may even learn to open her heart to others, something an undercover agent has little time to indulge.

Eric Gentry is also new to Thunder Point. Although he’s a man with a dark past, he’s determined to put down roots and get to know the daughter he only recently discovered. When Laine and Eric meet, their attraction is obvious to everyone. But while the law enforcement agent and the reformed criminal want to make things work, their differences may run too deep…unless they take a chance on each other and find that deep and mysterious bond that belongs to those who choose love over fear.

This is the story of Laine Carrington. She is an FBI agent that was shot in a raid on a commune that was growing marijuana in Thunder Bay. Though this happened in a previous book, this story stands alone and you really didn’t have to read it to follow the story. If you did read the previous Thunder Bay books, you will revisit many of the people you met before.

Laine comes back to Thunder Bay from NY to recuperate after shoulder surgery due to her injury. She is being commended for her bravery and will receive a medal of valor. Her mother is deceased and her father a prominent surgeon is mad at her for not going into medicine like her brother. While she tries to win his approval, he does nothing but put her down.

While in Thunder Bay, she meets Eric Gentry. Eric owns the local garage where he specializes in vintage car restoration. Eric has been in jail for a teenage stupid mistake and he never finished high school. Though they seem to have nothing in common, they fall in love and move in together. Laine is doing part time computer work for the FBI and seems happy here.

One day her father, with whom she is estranged, arrives at her door. He is acting strange and he apologizes for treating her so badly. Laine soon learns he has Alzheimer’s disease and can’t be left alone. She has to return to NY to try to get him settled. Finding some reliable to care for him seems useless and Eric can’t leave Thunder Bay as he has a daughter and a business. It seems pretty hopeless.

There is also some minor stories in the book. A teenage boy who works in the garage trying to care for his bedridden mother with MS and 2 little brothers. The romance between the town’s real estate lady and a worker in the garage.

It was a very interesting book and certainly a must for Thunder Bay and Robin Carr fans.

They shared a rich chocolate cheesecake dessert and Eric asked for a cup of coffee while she finished her second glass of wine. “What about that beer?” she asked. “Wasn’t it okay? You didn’t even drink half of it.”

“It was fine, but I’m not much of a drinker, and I’m driving. I should probably worry more about my coffee consumption.”

On the way home he asked her, “When you were a kid, did you do any middle-class stuff, like…you know…Brownies? T-ball? Explorers Club?”

“Nah, my parents had us in accelerated academic programs. We had tutors from the beginning. My father pushed really hard. I didn’t even know about those other things. I was playing chess by eight, Pax was an elementary school leader in science club. My dad had a plan and my mom pretty much went along with it. The only reason I was in karate is because Pax was.” She turned toward him and grinned. “But I took it better than he did. I can kick the stuffing out of him.”

Eric pulled into her driveway. He turned to look at her and damn, she was so pretty. This was just about a peak experience for him. “Good first date.” he said, oh so eloquently.

He lead her toward the door and when they got there she stopped and turned, looking up at him expectantly. “Well?”

He wasn’t an idiot. He knew what she was waiting for. “Don’t you want to get to know me better before we have that good-night kiss?” he asked, giving her a chance to make a break for it.

“Look, I haven’t been out on a real date in over a year and before that it was a series of really bad dates with guys I’d never date a second time and this was an excellent date. Didn’t I just say that? And damn it, I want to cap it off with a—“

It rapidly crossed his mind that she must have been a supervisor, at least. He slid his arm around her waist and lifted her up to his lips. She was small but not that light; he could feel the muscles that hand’t been so obvious. This was a strong woman. He found her mouth with his and planted one on her and then, almost instantly, he fell in love with that mouth. With one hand supporting her at the small of her back and the other plunged into her soft hair at the back of her head, he urged her lips open. He was cautious with his invasive tongue but she wasn’t. She welcomed him, pulled him in, joined him in tongue-play. Her arms circled his neck and held on tight and he moved over her mouth hungrily, drinking in her taste. She was just perfect. It was almost scary how perfect she was. He lapped at her mouth, devoured her, stared breathing hard in spite of his intention to be cool. He was not cool. He was over the edge.

He slowly broke away, but didn’t put her on her feet. He loved having her up against him. “Tell the truth. The president works for you…”

That made her laugh. “Want to come in?” she asked in a breathy whisper.

He shook his head. “If I come in, I won’t leave till morning.”

“Let’s get to know each other a little better.”

Oh, man, he was too sure. But there was a lot about him she didn’t know. And the front stoop was not the place to go through the details. “At least one more date, honey,” he said. “I think we’re both ready, but let’s take it a little slower…”

He laughed at her. “I think you’re a goddess!”

One response to “The Chance by Robyn Carr”