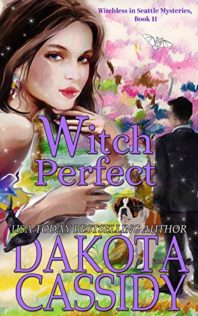 Who said life would be easy once your boyfriend raises from the dead?

Stevie is feeling a bit jealous in this latest story. Win and Arkady were always the voices in her head helping her solve murders. Their experiences as spies has been invaluable in keeping Stevie alive when those various murderers have tried to kill her.

But when one of her friends has been found murdered and his husband is begging for Stevie’s help in finding the killer, she is reluctant to help. She isn’t certain she knows what is holding her back but Win gets her to agree to investigate.   Problem is her beloved Spy guy is no longer just the voice of experience whispering in her ear.   He is standing beside her, and he is taking over and she can’t complete with his years of spy training.  The thrill of the chase used to make Stevie so excited, but that thrill isn’t as much fun, if you are simply lagging behind someone else’s chase.

But how do you tell the love of your life that while it is a dream come true to have them in your life,  their sudden existence doesn’t always make you happy?

I was torn between feeling bad for Stevie or annoyed at her attitude.  Everyone called her on her jealousy so they knew what her problem was but she had a hard time dropping the funk over Win taking over her investigations.  Actually, now that I think more on it, Stevie’s attitude since Win has been embodied has been pretty poor.   In Book 9, Stevie disappears after going on a shopping trip which she takes because she was annoyed by demanding Win was being.  She wanted him on the earthly plain but found living with him was a lot harder than she expected.

Win and Stevie also took a chance to told their whole story to Stevie’s friend Detective Dana, who then passed out and pretended he never heard anything and avoided Stevie for most of the story, but he went for a beer with Win.  This only added to Stevie annoyance at her fake James Bond.  He took her investigation.  He took her friend.

Even though we had another near death experience for Stevie, we still aren’t going anywhere on the romance front and Win has been embodied for about six months now and still living in the guest house he had built on the property.  I  have decided  that maybe Win’s brother, whose body he took over, was gay which is why Win suddenly has no sexual interest in the love of his life, or maybe they both realize that their impossible romance was more interesting than actually spending physical time with each other.

I still love this silly little series and want more.  I had originally noticed that Amazon had this listed as book 11 of 11 but the series is not over.  We might have gotten to the bottom of Win’s death but we still have the issue of Stevie’s magic and the Warlock who stole her power and wants her dead.  And I think we might someday get Arkady onto this plain as well, except that would leave no one on the other side to help Stevie survive her many harrowing experiences with the living.

Arkady and Win were both still howling as we drove back to Eb Falls, my face on fire with humiliation. I have to admit, it was a little funny. Not as funny as they were making it out to be, but funny.

Arkady gasped for air as he tried to speak between fits of hysterical laughter. “Did you see her fancy high heel caught up in chains, Zero? I think she is going to be hanging upside down forever.”

So, sure. That was a little funny. “Hey! Those heels were ginormous, and when Santini said the person Wade had been involved with lived in the same town, I lost my balance, I was so shocked. I didn’t mean to fall over on the big red bed of contraptions, but I did, and it swallowed me up whole. I was fighting my way out of it and trying to keep my dress covering my respectables–which, might I remind you–is almost impossible when it’s so tight you need two pair of SPANX to wear it, and well…let the comedy of errors begin.”

Somehow, the heel of my shoe got caught up in those heckin’ chains hanging down (which, as a by the by, are on a pulley, thank you very much) over the bed and, well, you know the rest. I ended up almost upside down, the blood rushing to my head as I dangled.

Thankfully, Win was there to make Santini feel inadequate enough that, by the time we left, you’d have thought he’d strung me up there himself.

“And the look on poor Santini’s face when I all but accused him of faulty equipment?” Win said before he began to giggle like a hyena. “When all’s said and done, my good man, I must go back and make my apologies.”

Poor Santini. Not only did he think he’d displeased Win, but he also thought he’d lost a client–one who had a boatload of money.

“Okay, chuckleheads, enough making fun of the cautiously adventurous but curious newb. I was so surprised by what Santini said, and how easily he handed you the information, that I tripped, okay? Call me Miss Clumsy Dove.”

Win snorted and reached over to grab my hand. “I’m sorry, Dove, I was so deep in character that I almost lost myself. When I realized your predicament, it snapped me back to reality. And lest you forget, I did help untangle you,” he pointed out.

“Yeah, yeah. After poor Santini ran around like a chicken with his head cut off, apologizing for something that wasn’t even his fault.”

Win snickered again. “I was trying to stay in keeping with my character, which was a dominant figure. I knew it from the moment I laid eyes on him what role he played at Divinia’s. But that aside, even you have to admit, you all tangled up in that Gordian knot of chains was a gut-buster, Dove.”

“It’ll be funnier once I get this dress off and I can breathe.”