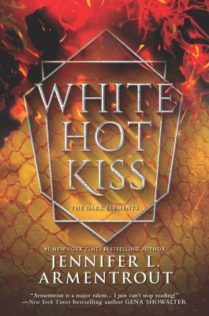 BOOK ONE OF THE FANTASTICAL DARK ELEMENTS SERIES

ONE KISS CAN KILL

Layla just wants to be normal--fit in at school, go out on real dates and do other typical teenager things. Trouble is, Layla is anything but normal and her longtime crush, Zayne, treats her like a little sister. Half demon, half gargoyle, Layla has abilities that no one else possesses. And even though Zayne is a Warden, part of the race of gargoyles tasked with hunting demons and keeping humanity safe, Layla's kiss will kill anything with a soul--including him.

Enter Roth--a smart-mouthed demon who claims to know her deepest, most dangerous secrets. Though Layla knows she should stay away, it's tough when that whole soul thing isn't an issue. Trusting Roth could brand her a traitor to the Warden family that raised her and destroy her relationship with Zayne. But with a violent demon uprising looming in the distance, kissing the enemy suddenly pales in comparison to the end of the world.

Layla is a half-gargoyle/half-demon. She was found in an orphanage as a child and taken in by the gargoyles, who act as Wardens protecting humans from evil (i.e. demons…and other spooky stuff). As a half-demon, Layla doesn’t exactly fit in in the Warden household and not everyone is happy to have her around. Layla has inherited some abilities from her demon mother, one allows her to see souls, which makes it easier to pick out the soulless demons around town and mark them for the Wardens to pick off later. But not all of those abilities are beneficial to Layla since she is also drawn to the most pure souls and wants to suck them out of people with a kiss. She did this accidentally as a child which is what brought her to the attention of the gargoyles.

As with any good young adult book, the story sets us up with a love triangle. Seventeen-year-old Layla has a crush on her slightly, older gargoyle friend, Zayne. Layla believes her feelings are unrequited, not only because Zayne treats her like a little sister, but it is expected that Zayne will mate with a full-blooded gargoyle female — and there is that whole sucking Zayne’s soul out if she kissed him problem.

Enter the new boy in school, Roth, who turns out to be a demon.  Roth has come to town from down south–way, way down south–to try to stop Layla from marking demons to be killed by the Wardens. The main man down under isn’t happy with what she is doing and Roth assures her that if she doesn’t stop, Satan is going to put a price on her head to put a stop to her once and for all. He also tries to get her to understand that just being a demon doesn’t make something evil. Just like humans, and even Wardens,   demons have levels of evil from simply mischievous to–yeah, really, really evil.

But that’s not the only reason he is here. He knows that the Wardens raised Layla to be ashamed of her demon side, and he wants her to understand that part of herself and embrace her demon nature, not suppress it. Roth is the first person who doesn’t make Layla feel bad about who she is.  He is also the first real, true friend Layla has made outside her Warden household.   Problem is that Layla is keeping her budding friendship with this demon a secret from her gargoyle family because she has a feeling that Roth tops to big bad on the demon list and if the Wardens knew he was there, especially hanging around Layla, they would do everything they could to send him back to Hell.

I picked up a copy of White Hot Kiss at the Blogger Conference for the RWA. I took it mostly for a giveaway but after seeing so many glowing reviews, I had to read it for myself. While it is a little predictable and formulaic, it was an enjoyable story. I really liked Roth and his pet snake, Bambi. The only reason I am not continuing with the trilogy simply comes down to being tired of the love triangles and from the descriptions of the other stories, I can guess where we will be going with it.  And while there is a formula to the story, it doesn’t mean that it won’t be enjoyable to read. Overall, I simply have too much of a backlog of books to review and the story wasn’t that gripping that I need to set everything else aside to see where it goes.

I would highly recommend it to anyone with teens who enjoy a good paranormal romance.

He turned back to the door, slowly pushing it open. “Oh. Wow. He’s definitely down here.”

Flickering lights and the worst smell north of Hell greeted us. I clapped a hand over my nose and mouth, the mixtures of decomposition and sulfur triggering my gag reflex. I’d rather take a shower in the moldy school stalls than go into this place.

Roth entered first, holding the door open with his booted foot. “Don’t wimp out on me.”

I let the door slam this time, because the idea of touching anything down here grossed me out. “How do you think he got in?”

Large metal cabinets full of God knows what cramped the corridor we traveled and the heat dampened my brow with a fine sheet of sweat. The overhead light swayed in the breezeless room, casting shadows across vacant workbenches and tools scattered across the floor. We squeezed past a stack of old chalkboards, more white than green.

“I think this is a bad idea,” I whispered, fighting the urge to latch on to the back of Roth’s shirt.

“And your point it?” Roth pushed open another door leading to a dark room where heavy machinery droned. The door banged into a stack of cardboard boxes.

Out of the darkness, a skeleton fell across the doorway, arms and legs flailing in the damp musty air. The eye sockets were empty and sightless, jaw hanging open in a silent scream. I let out a hoarse shriek, jumping back.

“It’s not real.” Roth picked up the skeleton and examined it. “It’s what they use in your biology classes. See.” He wiggled an off-white bony arm at me. “Totally fake.”

My heart didn’t agree, but I could see the metal bolts holding the arm bones together. “Oh, sweet baby Jesus…”

Grinning, Roth tossed the skeleton aside. I winced as it bounced, bones clattering when it hit whatever Roth had thrown it at.

And then something growled.

Roth flipped on the overhead light. “Whoops,” he murmured.

It stood in front of the boiler, a fake arm bone in its blackened hand and the rest of the skeleton lying at its feet. Thin wisps of air wriggled out of the patchy skin like brown worms. Areas of its face were missing flesh. A strip on the cheek flapped against the purplish lips, and what skin remained hung from the bones, heavily creased and resembling dried-out beef jerky. It also wore a suit that had most definitely seen better days–days that didn’t involve seeping bodily fluids.

Behind the boiler, the only window in the room was broken. That explained how it had gotten into school, but gave us no clue about why it was here.

Roth let out a low whistle.

The zombie’s eyes moved to Roth and kept on moving. At least one did. It went right out of the eye socket, flying through the air, splattering across the muck-covered floor.

Roth stepped forward, eyeing the mess on the floor as if fascinated. “That was pretty gross.”

I felt exposed standing in the doorway by myself. Inching closer to Roth, I kept my gaze on the zombie. I’d never seen one in such bad condition. God knows it had to have chomped on people by now, but the Wardens should’ve been notified through their contacts.

My movement drew the zombie’s one good eye. “You,” it gurgled.

I stopped. They could talk? Guess George Romero missed out on that. “Me?”

“Hey. Don’t look at her. Look at me,” ordered Roth, his voice heavy with authority.

It struggled to get its mouth to work right. “You…needs…”

“Um…why is it staring at me?” I gripped the strap on my back until my knuckles hurt.

“Maybe it thinks you’re pretty,” Roth quipped, stepping back as a rat ran in front of him.

I shot him a hateful look.

The zombie lurched, its left foot sliding forward. I stepped back, bumping into more boxes. “Roth…”

With slow, purposeful movements, the zombie winged the skeleton arm at Roth’s head. Bones in the zombie’s body cracked and splintered. Pus leaked out the tear in its jacket.

Roth snatched the arm out of the air, face incredulous. “Did you just throw this at my head? My head? Are you insane?”

It lumbered at me, groaning incoherent words.

“Roth!” I screeched, dodging the stinky arm. “This was a terrible idea!”

I reached behind me, grabbing a box. I threw it at the zombie, hitting it on the side of the face. An ear fell off, landing on its shoulder. “Yes! Do something!”

Roth crept behind it, wielding the skeletal limb like a baseball bat. “I’m trying to.”

“What are you doing?” I darted to the side as it reached for me. “Don’t you have any evil powers of darkness or something?”

“Evil powers of darkness? None I can use here without bringing the whole school down on us.”

This seemed ridiculous. “Can’t you come up with a better plan?”

“I don’t know feed it to Bambi or something!”

“What?” Roth lowered the arm, his expression dumb-founded. “Bambi would get indigestion eating something that rotten.”

“Roth! I swear to God I’m–” My sneaker slipped on the gunk and my leg went right out from underneath me. I hit the dirty, wet cement with a loud oof.  Sprawled out on the floor, I held up my slimy hands. “I’m going to barf. Seriously.”

My head jerked up as he swung the makeshift weapon. I scrambled back, getting hung up on my book bag. The skeleton arm hit the zombies head and then went through it. Mottled blood and flesh flew through the air, plotting off the floor…and onto my jeans.

Skin, muscle and bone sank in on itself. The thing sort of imploded, collapsing until nothing was left but a puddle of muck on the floor and the filthy clothing it had worn.