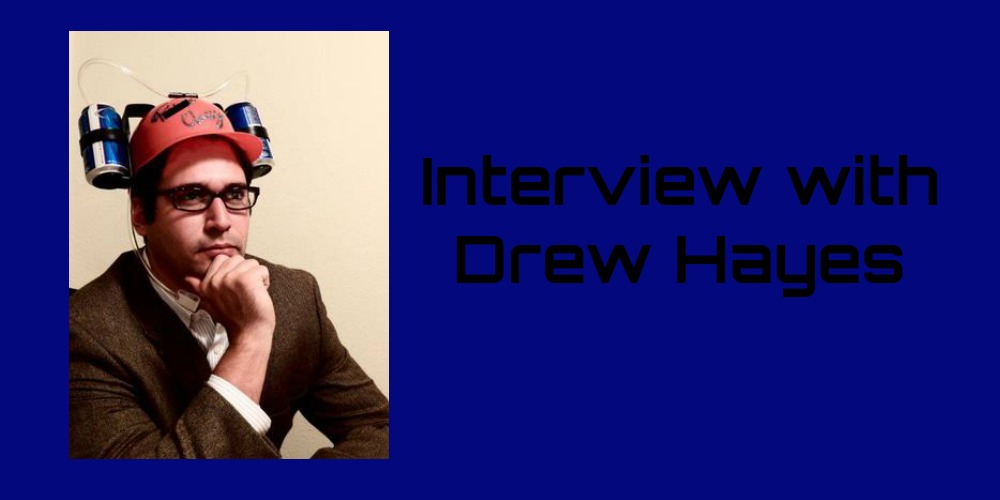 Next Tuesday is the release date for The Fangs of Freelance, the fourth book in the Fred the Vampire Accountant series, so we caught up with author Drew Hayes.

Good morning, Drew. I am so happy you could join us here this morning. We have our own Drew Hayes Fan Club at my office. I got everyone hooked on Fred and we have each branched out to the Super Powereds and Spells, Swords & Stealth series as well. We also love narrator Kirby Heyborne who presents a perfect Fred.

I knew from the moment I saw The Utterly Uninteresting and Unadventurous Tales of Fred, the Vampire Accountant that I had to know what that was all about. I want to know why did you choose a title that all but screams “Don’t read this?”

I knew from the get-go that Fred was going to be different from what people were used to. From the fact that he is arguably the least-interesting character in the series, to the method of doing 5 novellas instead of a single plot-per-book, to how few situations are resolved with action and violence; it was always going to be a gamble. I wanted a title that made it clear at a glance to be prepared for some odd, unusual choices in the structure, and I felt like the title was a great way to draw in the folks who would enjoy that while letting those who wouldn’t not waste their time.

I love Frederick Frankford Fletcher, and those I can get to read the series say the same, but I have a hard time explaining the awesomeness that is Fred and his friends to others. They see vampire and want to know does he drinks blood and kill people? Um, no. He has adventures. Does he have a sword or mad ninja skills? Nope. Oh, but Fred does have a sweater vest and knows all the tax codes. How do you explain the adventures of Fred to prospective readers?

I tell them it’s a story about a regular guy, who also happens to be a vampire, but that the vampire part is probably the least important thing about Fred. If they’re still interested after that (and not everyone is) I go a little more in depth about how the series gets to have fun questioning the idea that changing what you are has to inherently change who you are. And if they’re still down after that, I bust out the small details like the drug-loving mage or the teenage necromancer. By that point, most folks are either all the way in or sprinting down the street, yelling at me to shut up and stop following them.

For a vamp who has uninteresting unadventures, Fred has taken on some interesting characters. In the first book, he took on werewolves and a zombie making wizard. In Undeath and Taxes, he faced a power hungry dragon and a magical bed & breakfast. In Bloody Acquisitions, he takes on a huge vampire clan trying to run him out of town. What can we expect for Fred in The Fangs of Freelance and will there be more Fred to come?

I can’t give too much away on what to expect, but I will say that you get to see more depth to the world than I’ve gotten to show so far. A lot of the first three books had to be dedicated to world-building, but now that we’re this far in I can slow down a little and really give more time to systems and histories behind the various parahuman creatures. And yes, rest assured there will be much more Fred to come!

You have a habit of introducing characters but keeping all the interesting information about them to yourself, such as Arch (the paranormal agent) and Leroy (the sheriff of a hidden parahuman only town), and what the heck is in that lake? Will we ever get more information on these characters or will you continue to tease us with unanswered questions?

With Arch, you’ll see a little more here and there as the books go on. In fact you’re going to learn a bit more about him in The Fangs of Freelance (see, I told you there would be history bits) although not everything yet. As for Leeroy, he was especially well-developed because I originally came up with Boarback as the setting for a potential spin-off mystery series. While I don’t know if that project will ever find legs, I do want to find a way to let his secret out as the Fred series continues. I’ll say this much though: he’s not the only one of his kind in the Fredverse.

I love that the Tax Code for Parahumans in Fred’s world is also the same Rule Book for the NCP universe. Your Spells, Swords & Stealth series is obviously based on Dungeons & Dragons. You seem to have a strong knowledge of the game play and especially the various personalities of the players who are drawn to it, how many years have you been playing?

Glad you caught that! I like to tuck a few Easter eggs away for the people that read all the series, and when I needed a name for a role-playing book it felt like a natural fit. I’ve been playing D&D in some manner for about 17 years now. There was a time where it was harder post-college, when all my friends moved across the country, but now thanks to online options I’ve got a few games going, including the one we use for the Authors & Dragons podcast.

Thank you so much for stopping by and speaking with us. We are looking forward to more time with our favorite vampire accountant.

Thanks for having me, it was fun to answer these. Hope you enjoy The Fangs of Freelance!