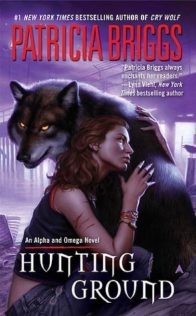 [box style=”rounded” border=”full”]As exciting as the whole werewolf politic issue is, what I love best is watching Anna and Charles trying to build their relationship. It has only been a few weeks since Charles has returned from Chicago with Anna, but he is starting to break down some of her barriers and they are strengthening their bond.  They are such opposites but they are definitely mean to be together.[/box]

It is time for the werewolves to come out to the world but not everyone shares Bran’s feelings on the matter. The European werewolves are not convinced that it is necessary so Bran has scheduled a conference. Charles is determined that Bran not attend this meeting. He has a feeling that something bad will happen if Bran is there when the tension is so high between the Marrock and the powerful European Alphas. Bran always listened to Charles’s mother’s feelings about things and he never regretted that decision. So Bran sends Charles and Anna to make nice with the European wolves, and to let them know in no uncertain terms that Bran will be bringing the werewolves out to the world and that the conference is not a vote, just a courtesy for them to air their grievances.

Charles and Anna face an uphill battle not only convincing the European alphas that this course is for the best, but also on a personal battlefield as well. Anna is having problems being surrounded by so many angry alphas and the alphas are even more agitated by the fact that there is an omega in distress and they can’t figure out why. When Charles sends Anna off sightseeing and shopping for everyone’s peace of mind, Anna is attacked by vampires who seem to have more planned than just a feeding. They are hunting like a pack of wolves and their plan is to kidnap Anna. This little omega wolf isn’t going to go quietly. Anna has been working on self-defense with Charles and she fights back like a werewolf possessed.

As if the trouble with the alphas isn’t enough, Charles and Anna now need to figure out who was behind the kidnapping attempt and why someone wants Anna so badly.

THOUGHTS:
I love seeing the growing relationship between Charles and Anna. Although it is still new for both of them, you can see they are growing closer and starting to work together as a team.

I try not to read other reviews before I have written my own, but I did catch someone’s complaint that someone was trying to kidnap Anna once again. To me it made a lot of sense and I didn’t see it as we do in some series that Anna is soooo irresistible that everyone has to have her. I think it has more to do with the fact that she is an Omega and the nature of an Omega’s is to calm the inner wolf.  Anna was changed by her original alpha to calm his mate who was going crazy. Many of the more powerful werewolves are very, very old and with age comes a bit of insanity. It makes perfect sense that these very old, powerful and slightly crazed wolves would want to kidnap Anna and keep her calming presence for themselves.  Omegas are very rare and to have one in a pack makes it special.  So no, it would not surprise me to see werewolves trying to grab Anna in each and every story.  She is a rare treasure that many would be willing to go against Charles to get her.

Anna might be a bit afraid of her own shadow, but she is growing more powerful in her confidence and if you try to hurt her Charles, she will bring down the wrath of God on your head. I loved seeing her fight for him with such passion.

We also had a visit from the werewolf and his blind witch who we met in one of the short stories in Shifting Shadows.

I loved this scene because is showed what a difference Anna is making to Charles’s life.  He is not a man who knows how to play and here Anna gets him to play in the snow.

And now he’d worked himself into a fine mood.

He focused on the snow and took a deep breath of cold air–and something heavy landed on his shoulders, dropping him facedown in the snow. Sharp teeth and a warm mouth touched his neck and were gone as quickly as the weight that had dropped him. Without moving, he opened his eyes to slits, and from the corner of his eye, he glanced at the sky-eyed black wolf facing him warily…with a tail that waved tentatively and paws that danced in the snow, claws extending and retracting like a cat’s with nervous excitement.

And it was as though something clicked inside Brother Wolf, turning off the fierce anger that had been churning in Charles’s gut for the past couple of weeks. The relief of that was enough to drop his head back into the snow. Only with her, only ever with her, did Brother Wolf settle down wholly. And a few weeks were not enough time to get used to the miracle of it–or to keep him from being too stupid to ask for her help. Which was why she’d planned this ambush, of course.

When he was up to it, he’d explain to her how dangerous it was for her to attack him without warning. Though Brother Wolf had apparently known exactly who it was who’d attacked: he’d let them be taken down in the snow.

The cold felt good against his face.

The frozen stuff squeaked under her paws, and she made an anxious sound, proof that she hadn’t noticed when he’d looked at her. Her nose was cold as it touched his ear and he steeled himself not to react. Playing dead with his face buried in the snow, his smile was free to grow.

The cold nose retreated, and he waited for it to come back within reach, his body limp and lifeless. She pawed at him, and he let his body rock–but when she nipped his backside, he couldn’t help but jerk away with a sharp sound.

Faking dead was useless after that, so he rolled over and rose to a crouch. She got out of reach quickly and turned back to look at him. He knew what she couldn’t read anything in his face. He knew it. He had too much practice controlling all of his expressions.

But she saw something that had her dropping her front half down to a crouch and loosening her lower jaw in a wolfish grin–a universal invitation to play. He rolled forward, and she took off with a yip of excitement.

They wrestled over the front yard–making a mess of his carefully tended walk and turning the pristine snow into a battleground of foot-and-body prints. He stayed human to even the odds, because Brother Wolf outweighed her by sixty or eighty pounds and his human form was almost her weight. She didn’t use her claws or teeth against his vulnerable skin.

He laughed at her mock growls when she got him down and went for his stomach–then laughed again at the icy nose she shoved under this coat and shirt, more ticklish then any fingers in the sensitive spots on the sides of his belly. He was careful never to pin her down, never to hurt her, even by accident. That she’d risk this was a statement of trust that warmed him immensely–but he never let Brother Wolf forget that she didn’t know them well and had more reason than most to fear him and what he was: male and dominant and wolf.

He heard the car drive up. He could have stopped their play, but Brother Wolf had no desire to take up a real battle yet.  So he grabbed her hind foot and tugged it as he rolled out of reach of gleaming fangs.

And he ignored the rich scent of his father’s anger–a scent that faded abruptly. Anna was oblivious to his father’s presence. Bran could do that, fade into the shadows as if he were just another man and not the Marrok. All of her attention was on Charles–and it made Brother Wolf preen that even the Marrok was second to them in her attentions. It worried the man because, untrained to use her wolf senses, someday she might not notice some danger that would get her killed. Brother Wolf was sure that they could protect her and shook off Charles’s worry, dragging him back into the joy of play. He heard his father sigh and strip out of his clothing as Anna made a run for it and Charles chased her all the way around the house. She used the trees in the back as barriers to keep him at bay when he got too close. Her four clawed feet gave her more traction than his boots did, and she could get around the trees faster.

At last he chased her out of the trees, and she bolted back around the house with him hot on her trail. She rounded the corner to the front yard and froze at the sight of his father in wolf shape, waiting for them.

It was all Charles could do to not keep going through her like a running back. As it was, he took her legs right out from under her as he changed his run into a slide. Before he could check to see if she was okay, a silver missile was on him and the whole fight changed abruptly. Charles had been mostly in control of the action when it was just he and Anna, but with the addition of his father, he was forced to an earnest application of muscle, speed, and brain to keep the two wolves, black and silver, from making him eat snow.

At last he lay flat on his back, with Anna on his legs and his father’s fangs touching the sides of his throat in mock threat.

“Okay,” he said, relaxing his body in surrender. “Okay. I give up.”

One response to “Audiobook Review: Hunting Ground by Patricia Briggs”