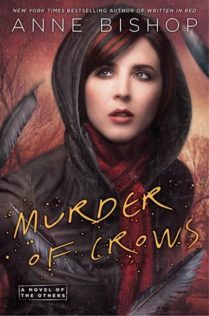 Murder of Crows (The Others, #2) by Anne Bishop

Return to New York Times best-selling author Anne Bishop’s world of the Others - where supernatural entities and humans struggle to co-exist, and one woman has begun to change all the rules.…

After winning the trust of the terra indigene residing in the Lakeside Courtyard, Meg Corbyn has had trouble figuring out what it means to live among them. As a human, Meg should be barely tolerated prey, but her abilities as a cassandra sangue make her something more.

The appearance of two addictive drugs has sparked violence between the humans and the Others, resulting in the murder of both species in nearby cities. So when Meg has a dream about blood and black feathers in the snow, Simon Wolfgard - Lakeside’s shape-shifting leader - wonders if their blood prophet dreamed of a past attack or a future threat.

As the urge to speak prophecies strikes Meg more frequently, trouble finds its way inside the Courtyard. Now, the Others and the handful of humans residing there must work together to stop the man bent on reclaiming their blood prophet - and stop the danger that threatens to destroy them all.

I am enjoying the characters and the world building of this series. I would highly recommend to all the fantasy/urban fantasy lovers out there.

There has always been a line between humans and terra indigene who subtlely control the natural world, but some humans are beginning to stir up unrest. They want more: more land, more control, just…more. Why is everything controlled by the beasts?

Someone making two very dangerous drugs: one makes you furiously angry and one makes you lethargic and neither allow you to worry about your own safety. One is being fed to crowds of humans who are attacking terra indigene with no regard to claws and teeth, and the other is being fed to the terra indigene, more specifically traps are being laid for the crows and when they eat the drugged food, they simply stand there, helpless against their attackers.

The humans are forgetting that the lands given to them by the terra indigene are far apart and surrounded by woods for a reason, and that past uprising have lead to human cities suddenly disappearing overnight. Humans are responsible for an attack on crows in Jersy and they wake to find their city cut off. The city is under seige by the terra indigene. The humans can’t leave and their food supplies have been cut off. What happens now will be up to the terra indigene.

The leaders have chosen to meet at the Lakeside Courtyard. Lakeside isn’t immune to the unrest but it is the only courtyard with a human pack living within the walls. Meg Corbyn, the human liaison and a cassandra sange or blood prophet, has created her own pack of friends among the humans who work within the courtyard, and for the first time, Simon Wolfgard, the leader of the Lakeside terra indigene finds himself counting these humans among those he needs to protect, rather than just meat.

It is Meg who first warns Simon and the crows of the danger of attacks. A small cut allows the blood prophet to view the danger among the hunt for “shiny” that the crows usually enjoy on garbage day.

And it is that early morning prophecy that shines a light on the issue in the growing friendship between Meg and Simon. Since Meg was hurt in an attack, Simon has taken to protecting her and sleeping with her to make sure she is safe.  But being suddenly kicked off the bed by a blood prophet, makes Simon shift to his human form to ask what is happening? Sharing a bed with wolf-Simon is one thing, but when naked-human-Simon slips under the covers, Meg has concerns where their unusual friendship is leading them.

As tensions rise between the humans and the terra indigene, can Lakeside be a shining example of co-existence of the races, or will is simply highlight the differences?

Since I read book 6 first, I have an idea what is in the future for this series, but I am still enjoying as the story unfolds.

In a story where the shifters are more animal than human, you can understand where both sides have a concern of how far Simon and Meg’s friendship can go. They have become very comfortable with each other and has the feel of a friends-to-lovers story, but Meg has just escaped a life of capitivity and is almost innocent to relationships in general, let alone the complexity of a romance with Simon. As leader, Simon keeps himself apart from the others, even the other wolves, so spending time with Meg brings him contentment. It is Simon’s people who remind him that while humans write stories of shifters and humans falling in love and living happily ever after, those same stories told by terra indigene are told as warnings why it should be avoided.

We also meet another group of humans known as the Intuit, who, while they don’t prophize, they do get feelings of thing that might happen. A large group of intiuts live on an island not to far from Lakeside. They believe that blood prophets might have one time been intuits. When the leader from the island wants to meet Meg, Simon agrees until he realizes that while things are awkward between Simon and Meg, Meg could easily mate with an intuit. Then Simon wants to make sure Meg doesn’t like him too much.

I am enjoying the world building presented in this series and as a romantic, I like the sweet moments between Simon and Meg. Right now there is not sexual tension, just a growing friendship that both are growing to depend on.

When he reached his apartment, Simon paused and considered. Human-skin or wolf? Which shape would achieve what he wanted? Since that answer was easy, he bounded up the stairs to Meg’s porch, pressed on the doorbell in a way that made it sound like a demented mechanical squirrel, then gave his fur a good shake while he waited.

Meg opened the door. He gave her a wolfie grin. When she didn’t invite him in, he studied her face, wishing he could step closer for a good sniff without her slamming the door in his nose. She looked embarrassed. Uneasy. Since he didn’t understand why she looked that way, he pushed past her, then stopped so he wouldn’t track snow all over her floor.

“Simon,” Meg finally said as she closed the door. “Why are you here?”

She was his friend and he wanted to be with his friend.

“Do you want something?”

A towel to dry his feet would be nice. She couldn’t communicate the way the terra indigene did, but she must have figured out why he was waiting near the door because she disappeared for a moment and came back with a towel that she put on the floor so he could press his feet against it. Must have gotten it from the hamper since it smelled like her.

He pressed his feet into it a few more times before going over to her sofa and getting comfortable. Okay, she hadn’t actually invited him to come in and get comfy, but she wasn’t screeching for him to get out either.

Meg stood near the sofa, instead of sitting down the way she was supposed to. She said, “I know you prefer to stay in wolf form on Earthday, but maybe you can shift for a few minutes so you can tell me what you want?”

Oh, no. He was furry, not stupid. The last time he shifted from wolf to human in order to talk to her, she had gotten all confused and things had gotten strange between them. He wasn’t stepping into that trap again. So he just looked at her expectantly.

“If you could just tell me what you want…” Her face colored as she glanced at the small clock on the table and then at the television. “It’s just…I watched a television show last Earthday and the next segment is on in a few minutes.”

He wasn’t stopping her from turning on the TV. In fact, he liked the idea. She would sit still and pet him. He waived the tip of his tail a couple of times to indicate approval.

Meg sighed, turned on the TV and selected the channel. Then, she said at one end of the sofa, her cheeks still full of color. Once the show started, Simon intended to reposition himself so that he could rest his head on her thigh, the way he used to on movie night. Before he could do that, Meg opened a jar full of thick cream that smelled like the soap and shampoo the terra indigene sold in their stores.

Propping one foot on her knee, she slathered cream all over that foot, spending extra time on the skin around her toes while she watched the TV show. Then she pulled on a thick sock before doing the same to the other foot.

The first time Simon prodded her thigh with his paw, she ignored him because the story on TV had reached a tense moment, and she ignored the second poke a minute later. But she squealed when a big paw suddenly appeared in front of her face.

She jerked her head back and yelped, “What?”

He looked at the jar of cream, then held up his paw again.

The heroine screamed, pulling Meg’s attention back to the story but she couldn’t see what was happening because that big paw appeared in front of her face again.

Scooping more cream out of the jar, she carefully rubbed it into the pads on one front paw and then the other, massaging the paws longer than she intended because she got caught up in the story.

After she finished the front paws, Simon settled his head on her thigh and closed his eyes.

“Bad wolf,” she muttered as she burrowed her fingers into his fur. She added, “Hope your front end doesn’t go sliding across the floor.”

His response was a contended sigh. A slidy game of chase across the apartment’s wood floors might have been fun, but this was very nice too and he liked how careful she’d been with his paws.

Simon listened to enough of the story to decide it held no interest for him.  In fact, he wasn’t sure it would hold much interest for any kind of male and if he’s worn his human skin, it would have been hard not to look bored and that would have made Meg unhappy.  But a wolf could keep her company and snooze while snuggling up much closer than she would have allowed him to if he looked human.

A furry wolf was a friend.  A human-shaped male was a confusion.  Contentment filled him as he breathed in the scent of her.  He raised his head and gave her hand a couple of licks and felt a quiet happiness flow through him as he went back to snoozing.   Even with the cream on her skin, he really did like the taste of her.