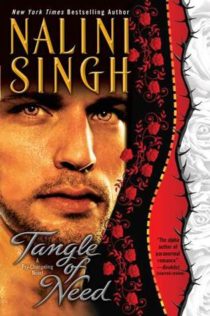 Adria, wolf changeling and resilient soldier, has made a break with the past–one as unpredictable in love as it was in war. Now comes a new territory, and a devastating new complication: Riaz, a SnowDancer lieutenant already sworn to a desperate woman who belongs to another.

For Riaz, the primal attraction he feels for Adria is a staggering betrayal. For Adria, his dangerous lone-wolf appeal is beyond sexual. It consumes her. It terrifies her. It threatens to undermine everything she has built of her new life. But fighting their wild compulsion toward one another proves a losing battle.

Their coming together is an inferno…and a melding of two wounded souls who promise each other no commitment, no ties, no bonds. Only pleasure. Too late, they realize that they have more to lose than they ever imagined. Drawn into a cataclysmic Psy war that may alter the fate of the world itself, they must make a decision that might just break them both.

In this 11th installment of Nalini Singh’s, Psy-Changling series, the air crackles with tension as the PsyNet is the verge of civil war. Councilor Harry Scott has been missing in action since Sienna Laurens, an X-Psy, brought forth a raging fire and destroyed most of the Psy army to protect the changelings. While the Psy try to recover and determine whether or not Harry was killed in the fire, other leaders of the Psy are making power plays for supremacy and they do not care how much of the NetMind and it inhabitants must be sacrificed to emerge as the victor. When a plan comes to light that might claim tens of thousands, the Psy turn to their enemy, the changelings, to help keep their world from collapsing.

In the background of this story, the SnowDancers are celebrating the recent changes in their pack, including a new life created by a mated pair, and the mating ceremony of their Alpha, Hawke, with Sienna Laurens. The joy felt by the pack on this momentous occasion is tempered by a little envy. Lone Wolf and pack Lieutenant Riaz Delgado found his mate a year ago. He felt the wondrous pull of the mating bond. But Riaz meets a harsh reality when he finds out that the woman is already happily married, and bond or no bond, he would not bring himself to claim a mate who was already in love with another.

He has returned to the SnowDancer territory to lick his wounds surrounded by his pack family, and to get on with a future that will not include a life mate. His attraction to Adria Morgan feels like a betrayal to a woman whom he can never have and it tormenting and frustrating his inner wolf.

It has been awhile since Adria walked away from a long-term relationship which never included that precious mating bond. When Adria and Riaz decide to give into their mutual attraction to simply fill the loneliness that they both suffering, their attraction builds into more, a mutual respect and desire to spend time with each other.

Although most romances featuring plain-old humans involve taking that uncertain chance at love with another person, it is a very hard decision in the world of shifters to risk giving your heart to someone to whom you can only be second choice to their one true mate.

While sneaking peaks into the mating bond shared by Hawke and Sienna as they prepare for their bonding ceremony, we are given the contrast of an unprecedented pairing of two changelings who are trying to create a life outside of a mating bond and the uncertainty of whether the bond they create will be as strong as natural instincts, and the risks involved to heart and soul.

What is quite compelling in this story, while most Were and Shifter stories involve the use of a “mating bond,” Tangle of Need focuses on second chances outside of the mating bond and gives us a taste of the decisions and fears suffered when circumstances force changelings to live without that bond and whether love can be achieved naturally between two primal, dominant wolves without the magic of that sacred bond.

This was my first Psy-changling story, it didn’t take long to pick up the nuances and the who’s who from the prior stories so don’t think you have to start at Book 1, but you probably will want to. The characters presented were so richly written it was easy to be swept away with the story.

I have only read a few Nalini Singh stories, but I so love the intensity of her characters that I already want to add her to my list of favorite authors and I want to carve out some time to try her Guild Hunters series.

Having finished his sandwich, he turned to grab his water, saw hers. “Eat the rest.”

Already on edge, she bristled. “Since when do you get to give me orders?”

Eyes of pale gold met hers, lashed by black silk. “Since I realized you have a tendency to not eat properly.” Picking up the sandwich, he held it out.

She took it, place it back down. “Don’t try to control me.”

Riaz’s voice was a deep rumble. “I will not let my woman mistreat herself. Eat the sandwich or we’ll be here all day.”

Her throat choked up, until she couldn’t speak, every part of her hotly conscious of the hand he’d placed once more on her thigh. A couple inches higher and he could slide that big hand to cup her with the same intensity he’d done last night, in the hushed dark of her bed. The rough heat of his body so close, the dusky bronze of his skin an invitation to her lips, it stole her mind, made it impossible to think.

Pushing aside his hand, she brought her legs up to crouch on the boulder—then jumped off the other side. “Maybe I’ll eat the sandwich later”—her heartbeat punching into her throat—“if I feel like it.” This had nothing to do with the sandwich, they both knew that.

Narrowed eyes. “You really want to challenge me over this?”

His tone raised her wolf’s hackles…and shot adrenaline through her body. “You know, why don’t you eat it, since you seem to like it so much.” With that, she turned and sauntered into the forest, ensuring her hips swayed in a way designed to further arouse his most dominant instincts.

Riaz stared into the trees where Adria had disappeared, his wolf at snarling attention. If she thought he’d just let her go after that kind of provocation, she had no idea who she was dealing with. Taking the sandwich, he wrapped it up in the paper bag and slid it into the pocket of his jeans. It was going to be squashed all to hell by the time he ran her down, but his empress would damn well eat it.

A grim smile on his lips, he was on his way into the forest when a small body barreled into his legs. “Whoa!” grabbing the pup, Riaz set him upright.

But the boy wobbled, his face screwed up in a childish effort not the cry.

“Hey.” Crouching down, Riaz checked the pup over, discovered a sprained ankle. “Come on, little buddy.” He took the boy into his arms. “We’d better go see Lara.”

The distraught pup attached himself to Riaz like a limpet and wouldn’t let go until his mother arrived at the infirmary, by which time Adria had a fifteen-minute head start. However, Riaz was a lieutenant and one of the best trackers in the pack. It took him only two minutes to pick up the crushed berries and ice and wild musk of her scent, another thirty seconds to realize two very important things.

One, Adria had run full-tilt the instant she was out of his sight; and two, she’d made an attempt to cover her tracks, so she clearly understood the consequences of the gauntlet she’d thrown in his face. His blood turned hot, the chase suddenly a very adult game…until her tracks, no longer concealed in any way, showed that she’d slowed down to a walk.

He bared his teeth.

Adria thought he’d given up. That was her second mistake. Her first had been to taunt him in the first place. Stalking her in silence, he tracked his quarry to a natural pool fed by two streams, taking care to remain upwind. A pile of discarded clothes lay on the bank, but that wasn’t what drew his eye.

Sleek and wet, she rose up out of the clear water, reaching back to squeeze the excess moisture out of her hair.