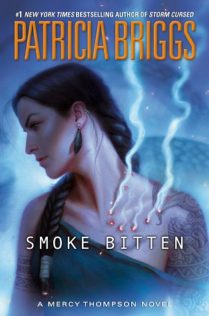 Mercy Thompson, car mechanic and shapeshifter, faces a threat unlike any other in this thrilling entry in the #1 New York Times bestselling series.
I am Mercedes Athena Thompson Hauptman. My only “superpowers” are that I turn into a thirty-five pound coyote and fix Volkswagens. But I have friends in odd places and a pack of werewolves at my back. It looks like I’m going to need them.
Centuries ago, the fae dwelt in Underhill–until she locked her doors against them. They left behind their great castles and troves of magical artifacts. They abandoned their prisoners and their pets. Without the fae to mind them, those creatures who remained behind roamed freely through Underhill wreaking havoc. Only the deadliest survived.
Now one of those prisoners has escaped. It can look like anyone, any creature it chooses. But if it bites you, it controls you. It lives for chaos and destruction. It can make you do anything–even kill the person you love the most. Now it is here, in the Tri-Cities. In my territory.
It won’t, can’t, remain.
Not if I have anything to say about it.

One of the best Urban Fantasy series. Love these characters. Must do a series re-read soon.

Having one of the scariest vampires ever actively stalking you, should have been the worst thing to happen to Mercy. But at least Wulfe isn’t actively trying to kill her.  At least she doesn’t think so. Not yet anyway.

Something has slunk out of the fae home of Underhill; something that can take over your mind and turn you into a killer.  Since it tried to control Mercy and failed, it is now pissed off. Immensely pissed off.  Fear and the fae don’t go well together and now this smoke beast wants to get rid of Mercy and is using her friends to do his bidding. Everyone Mercy loves is under attack and she can’t protect them all.  The worst part for Mercy is once that smoke beast takes you, you die and several of our favorites are taken over with only one goal, get close to Mercy and destroy her.

It is especially hard for Mercy to concentrate on Wulfe or Underhill or this smoke monster when all she can think about is the fact that her husband has started choking off their mating bond. Things have been strained between them since the night they destroyed the zombie horde.  Is it the pressure of her declaration that the Tri-Cities was under the protection of the Pack or Mercy’s odd nature being such a draw to more and more supernatural bad guys? Has Adam simply had enough of the trouble that she has brought into his life?  If so, why won’t he simply tell her that instead of avoiding her?

Once again, poor Mercy is taking a beating from all sides, and not all of them figuratively.

I am not saying that the smoke monster wasn’t an interesting story plot and didn’t keep me biting my nails but what was going on with Adam had me more distracted than any mind-controlling monster. The monster you know Mercy will destroy, eventually, but was Adam really done with his relationship with Mercy? Can you break a mating bond? Is this some way to bank on that statement Anna makes in Burn Bright questioning Bran’s actual feelings for Mercy? No, no, NO! She can defeat any monster which comes but if Adam wants out?  WTF? I was very stressed about this book.

And the thing with Wulfe — you might think “Oh, he’s a great character. I love him. It’s awesome he’s on our side now.” No, no, DEFINITELY NO!   He is definitely interesting but I wouldn’t trust his sudden willingness to play nice with the pack for an instant. Wulfe is a great character but he is also crazy and unpredictable. Like many of the older supernatural creatures, he finds Mercy to be interesting? Like a fascinating bug they want to keep in a jar. And in Wulfe’s case, when will his fascination turn to actually trying to keep Mercy in a jar and cutting off her toes for fun? We will need to wait and watch.

I love the Mercy Thompson series and the Alpha and Omega series and want more, more, more!  I definitely need to make the time to start this whole series again and do a straight re-read.

Also check out:  Why being an Urban Fantasy Heroine Sucks!

Whatever it was I had done had interested him very much. Ever since the night of the witches, I’d been catching his scent around our yard when there was no reason for him to be there I’d even caught a glimpse of him now and then, when he wanted me to know he was nearby.

I’d treated him as I preferred to treat ghosts. If I didn’t pay attention to him, maybe he’d go away.

“Not fortunate,” demurred Wulfe, answering Aiden with a coyness that would have been more appropriate from a Southern belle in an old movie. In old movies, overacting was standard fare. “Not mere luck. I am stalking Mercy. Of course I was around because that’s what stalkers do, or so I’ve read. It’s my new hobby.”

I stared at him, and then I coughed up some river water.  Which felt a lot better than that smoke had but was still not fun. Then I stared at him some more–and started shivering. It might have been the water and the night air.

With his words, Wulfe had destroyed my ability to ignore his lurking. Stalking. My friend Stefan, who was also a vampire, had warned me that Wulfe thought I was interesting. And that had been before I’d done whatever I’d done to him.

Wulfe smiled at me. To someone who didn’t know him, hadn’t seen him with enslaved victims he was slowly killing, that smile might have been very sweet.  But I knew better.  His expression sent cold chills into my chest. There was intent in his eyes. He was hunting and I was his prey.

When I got scared, it sometimes manifested in anger. I wanted very badly to shift back to human so I could tell him what I thought about his hobby. I didn’t, though. I didn’t want to be naked in front of him. It wasn’t modesty. Naked is vulnerable in front of predators like Wulfe.

Adam moved between me and Wulfe and met the vampire’s gaze. It wasn’t something I’d have advised; vampire powers work just fine on werewolves. But I could feel Adam draw on the pack ties, so he must have done it as a deliberate show of power. I hoped he was right, that the pack had enough juice to neutralize the vampire’s magic.

Wulfe raised an eyebrow and his smile grew sharper. He stared at my mate. It felt to me as though it might have been hours, but I think it was less than ten seconds before Wulfe looked down. He was still smiling.

He looked at me. “Are you going to live? You’ll have to tell me how you ran into a field chasing a rabbit and ended up enspelled and dying.” His smile widened. “And then I saved you. You owe me for your life.”

“You will leave her alone,” said Aiden, and his voice was no longer mild.

I looked over. Aiden might be dripping with water, but he didn’t look cold, though the night air had an edge of chill that preceded true autumn.   In fact, as I watched, steam was starting to rise off him. He was standing much, much too close to the vampire.

Wulfe’s eyelids lowered and he smiled. “Make me, Fire Touched. Make me.”

Aiden was too close to the vampire, too far away from Adam and me for either of us to prevent what happened next. Aiden reached out and touched the vampire’s arm, and Wulfe was engulfed in fire.

The vampire screamed, a high-pitched terrified sound, his body so bright with fire that it hurt to look at. He flailed his arms as if trying to put the flames out–or trying to fly. He stumbled backward, away from Aiden. Sparks started drifting from his burning body, landing among the dry leaves and weeds, which started to burn.

Still screaming, Wulfe rolled on the ground, but it did no good; the flames continued undaunted. His flesh bubbled up and blackened–the air began to smell like someone was holding a barbecue. The warmth from the fire brushed my skin.

Unlike a gunshot, screams were not common around here, but no lights went on and no dogs barked. I realized that Adam must still be holding on to the pack magic that kept people from noticing us.

Adam climbed onto the bank and bumped his shoulder lightly into Aiden’s side and the boy reached over (not down, because Adam is a werewolf and Aiden is not very tall) and put his hand on Adam’s back, closing his fingers on Adam’s fur. Other than that, the boy looked unmoved by the gruesome sight of Wulfe burning.

I came up on Aiden’s other side more slowly.

Wulfe rose to his knees and reached out as if to touch Aiden–but lacked the strength to close the distance between him and us. “Please,” he said. “Please. I don’t want to die…”

Wulfe dropped to the dirt, facedown.  He stopped moving, but his body still burned. Flesh blackened and smelling like burned fat.

Then he turned his head and looked up at me. In an entirely normal voice he said, “Too much, right?”

The flames around him died, leaving us all in the dark as Wulfe bounced up to his feet.

I had never seen something that Aiden could not burn. I’d seen him melt metal and crack stone with his fire. A vampire was not metal or stone. Vampires are vulnerable to fire.

There were not a lot of ways to kill a vampire. Fire was the best one I knew of. I had trouble pulling air into my lungs again, but this time it wasn’t magic that cause my difficulties–it was fear. I would not have thought that anything could make Wulfe more terrifying to me before this moment. I had been wrong.

Review: Amid the Winter Snow by T. Harrison, G. Draven, E. Hunter & J. Kennedy
« Audiobook Review: As You Wish by Helen Harper
Review: The Beast of Beswick by Amalie Howard »