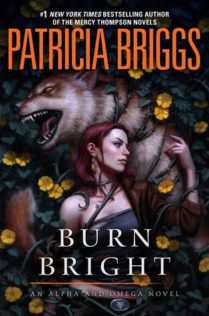 In her bestselling Alpha and Omega series, Patricia Briggs “spins tales of werewolves, coyote shifters, and magic and, my, does she do it well” (USATODAY.com). Now mated werewolves Charles Cornick and Anna Latham face a threat like no other–one that lurks too close to home…

They are the wild and the broken. The werewolves too damaged to live safely among their own kind. For their own good, they have been exiled to the outskirts of Aspen Creek, Montana. Close enough to the Marrok’s pack to have its support; far enough away to not cause any harm.

With their Alpha out of the country, Charles and Anna are on call when an SOS comes in from the fae mate of one such wildling. Heading into the mountainous wilderness, they interrupt the abduction of the wolf–but can’t stop blood from being shed. Now Charles and Anna must use their skills–his as enforcer, hers as peacemaker–to track down the attackers, reopening a painful chapter in the past that springs from the darkest magic of the witchborn…

I love Patricia Brigg’s Alpha & Omega series even more than her Mercy Thompson series. I just love the dynamic of Charles and Anna. That’s why I was a bit disappointed in Burn Bright since I felt I didn’t get enough of Charles-and-Anna-time  as a chunk of the story splits up their time together.  I had to do an immediate re-read to that I could appreciate the rest of the story.

In Burn Bright, Bran is away after helping to free Mercy (see Silence Fallen). While he is away from the pack, he decides he is going to visit his son Samuel in Africa, leaving Charles in charge of the Aspen Creek pack. Charles gets an emergency call from help from Jonesy, a dangerous fae and mate to one of Bran’s werewolf wildings. Bran’s pack are mostly the oldest and more unstable werewolves, and the wildings are the worst of them, not able to be in a pack environment. The wildings live in the more uninhabitable areas of the Montana mountains and Bran, Charles, Leah and Asil keep an eye on them since they are so antisocial.

Jonesy indicates that his mate has been captured and to let Bran know there is a traitor in their midst giving out information about the wildings. Charles and Anna go to investigate and help rescue Hester, and come across more than they wanted in the trained merceneries (both human and werewolves) attacking the wildings.

They need to warn all Bran’s wildings that there is danger prowling the mountain. Breaking into teams to try and reach all these wolves in their remote locations is their only choice but it also leaves them more vulnerable to attack, and not just from the merceneries. These individuals are secluded because they are dangerous and any stranger can set them off. These damaged wolves also seem to have a very odd reaction to Anna’s Omega nature.

The plot twists and turns and we learn there might be more to Bran’s disappearance than just an ill-timed vacation, such that could bring an end to the peace at Aspen Creek.

I was very happy to find this series in the Mercy Thompson world. Anna was an abused woman, forced to become a werewolf. Charles helped rescue her and although he is more then able and willing to protect Anna, he forces himself to step back and allow Anna to find her own way, ready to catch her if she falls, but knowing that she needs to develop her own sense of worth after the physical and sexual abuse she suffered.

It is this dynamic and the great differences in their personalities which I enjoy so much and seeing how their relationhip changes both of them. Anna is a survivor and learning to trust and open up to people again and Charles, who as the enforcer of the werewolf laws keeps to himself most of the time, now he has Anna and he needs to learn to share himself with her and how much he has changed to have someone besides his father and brother who he is close to.

Saying all that, my first read of the story left me disappointed with Burn Bright after waiting almost three years for a new Alpha & Omega story. Mostly because a chunk of the story requires Charles and Anna to split up and overall, I didn’t get enough Charles and Anna time. Leah who likes to cause trouble with Bran’s sons out of jealousy, made sure to send Anna with Asil to do some investigating and sent Charles with Sage. She did this knowing it would bother Charles, but it mostly just bothered me. It was a necessary plot point to change up the dynimics.

Upon my second read of the story, I could focus on all the great story points and those twist and turns that I mentioned before that would have made the story so engrossing the first time if I could have punched Leah out and kept Charles and Anna together.

Happenings in this story also cause Anna some flashbacks to her time of abuse and I don’t think that was addressed enough.

There was a lot of plot points to cover in the story and because of that it was a little too convenient that they tripped over all the necessary information they needed without spending days searching.  I would have simply been happy with a “of course, it was the last place they looked…” or “after spending half a day knocking on doors, they finally…”  We didn’t have to waste too much page time, but we also didn’t need to find what we were looking for in the first place we stopped.

Where Mercy Thompson is told mostly in the first person perspective. Alpha & Omega bounces between Charles and Anna.  I really like the dynamic of these two characters and how they are so different but make a perfect compliment to one another.   I also love Bran, who is noticably absent from this story.

As they neared, Jericho tilted his head and frowned at Anna. “I don’t know you,” he said. “Should I know you?”

Jericho looked at her with blue eyes that shifted from wolf to human with an unhealthy speed. “The Omega?”

Without tightening his muscles in warning, without a word or a sign, he jumped her.

They rolled down the steep side of the mountain so quickly that Devon and Charles didn’t catch up with them until they were nearly to the bottom. They rolled up against a tree and slammed into it, Anna letting out a grunt that had more startle than pain in it.

Charles would have snapped Jericho’s neck if Devon hadn’t knocked him sideways, then stood in front of the tangle of bodies. His head was lowered, tilted submissively, his tail was tucked, and he was shaking like a wet horse in a snowstorm, but he still stood between them.

“Second time in one day,” Anna complained with a tremor of shock in her voice. “What is it with people? Did they forget their manners? Hello, how are you? No, I get the full tackle like I was a quarterback.”

If she was complaining, she wasn’t badly hurt–though rolling down that rocky mountainside wouldn’t have done her any good..

“No manners at all,” said Jericho’s muffled voicce. “Oh God. Oh God. You don’t parade surcease like this in front of wildings, you young idiot. What were you thinking?”

It took Charles a second to realize that he was the young idiot Jericho was talking about.

Jericho gave a shaky half laugh that was full of tears. “I’m sorry. So sorry. God. I can think. I can breathe.” There was a little pause, and he said, in a lost voice with a touch of panic, “What I can’t do is let go. It doesn’t hurt. It doesn’t hurt.”

“Well, I hurt,” Anna said in a grumpier voice than before. “We just rolled down the side of a mountain.” This time there was a thread of panic in her voice. “Don’t get me wrong, but I would really, really be grateful if you would let me up.”

They were so fragile, these wildings of his da’s. Dangerous as all get out, but they were fragile.

He is frightening our mate, growled Brother Wolf. If he doesn’t stop, it won’t matter how dangerous or fragile he is–he will be dead.

One response to “Review: Burn Bright by Patricia Briggs”