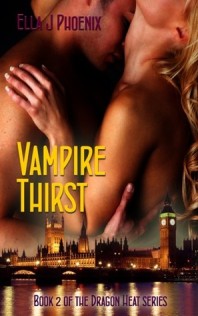 [box style=”rounded” border=”full”]We pick up where we left off after Dragon Heat with both the action and the romance. The conspiracy builds, and we see that insta-love doesn’t always go smoothly.[/box]

The missing dragon senator’s daughter was rescued by Zoricah and Tardieh and their friends in New York. Information found at the scene leads their investigation to Europe. Zoricah, Yara and Sam head to England to meet with an old informant, but with barely a word to Zoricah, Tardieh takes Hikuro and the others and heads to Spain to do his own investigating. Zoricah is torn between continuing the investigation and finding out why the man who only days before was profession undying love just walked out of her life without so much as a look back.

Hikuro shows up just in time for Zoricah’s townhouse in London is be blown up, adding to the question of how did someone find her safehouse and how big is this conspiracy? With Hikuro backing up Yara and Sam, it is now the perfect time for Z to head to Spain to see why Tardieh is suddenly giving her the cold shoulder.

In England, Sam is attacked and only makes an escape because Hikuro is following her. He comes to learn that Sam hasn’t been attacking Hikuro, she simply has little control over her energies. Sam was born a human but as a youth was brought to a psychiatric ward where strange experiments were being performed. Sam no longer ages and she emits electricity. Hikuro teleports Sam to his home to teach her how to focus and control her energies and also to keep her safe.  It seems that someone wants to see exactly what makes Sam spark.

With Hikuro, Sam and Z all otherwise engaged, Yara is left alone in England and has picked up a stalker of her very own, a wolf shifter who has been blackmailed into killing the Vampire King and Yara is his best lead to track down the elusive Tardieh.

THOUGHTS:
Now that the basic character introductions have been made and the world building laid out, we start focusing on the investigation and fleshing out our cast of characters, both good and bad.  The second book was certainly more enjoyable and more exciting because of it.

This story was broken up in to two parts, one part focusing on Sam’s origins and the romance between Sam and Hikuro, and the other part going back to Zoricah and Tardieh.

As a simple human, Sam was subjected to electroshock therapy in the psychiatric ward sometime around WWII. Due to that treatment, it took years for Sam to even remember her name.  This is a perfect explanation of why her past still comes to her in flashes, but she does remember more and more about the orphanage she grew up in and the doctor did experiments on her in the Ward.   Hikuro and Sam had an instant attraction in Dragon Heat, but Hikuro was still pretty pissed and mistrusting of his own reaction to Sam after she zapped him at the club to get Tardieh’s attention. It takes awhile for him to work through his anger even though the buzz is still there between them. Once he realizes that Sam isn’t trying to attack him and hurt him, but that she simply can’t control the level of energy she expends, he works with her to focus her power, which also gives them alone time which works its way into sexy naked time.

Once things start to settle for Hikuro and Sam, we then switch over to Zoricah and Tardieh. At the end of Dragon Heat, Tardieh wants Zoricah to become his queen, but since Zoricah’s blood isn’t pooling in her genitalia, she knows that nobody is going to be wishing congratulations to the Vampire King for selecting a unacceptable, demi-goddess Dragon as his queen. Z want them to think about the consequences of their relationship, but in an all-or-nothing sulk, Tardieh goes off to do his own investigating since Zoricah “turned him down.” While this matter is not completely settled, they do agree that they want to be together.

Zoricah is not completely wrong in her belief that the vampire/dragon mating is going to make the others crazy. The wolf shifter is blackmailed to kill the Vampire King and of course, starts following Yara, figuring out where to find her.  Once again, some aspects of the investigation are solved, but not everything.  This will lead us into the beginning of book 3.

This story had at least 100 pages more than the Book 1 and really gave us time to spend with characters and with building the story plot as well as the romantic aspects. The next story features Yara and the wolf shifter and has 100 pages more than this one. We know all our main characters so I anticipate really being able to get into a juicy plot.

Received a review copy from the author in exchange for an honest review.

Her only chance to redeem herself, to mend her fuck-ups, to find out where Yerik’s operations were, was now ruined, and why? Because of stupid, chauvinistic, control-freak male egos.

Footsteps on wet pavement behind her brought Sam back from her bitchin’ reverie. Years of self-defense training kicked in. She slowed down and located from which side her attacker was coming at her–left–and waited. Just before he reached her, she twisted her body, blocking her attackers’s raised arm and, using the heel of her hand, she hit him straight up the nose.

“What the fuck do you think you’re doing?” Same asked, not knowing what to make of having successfully struck a vampire ninja. Yay?

“I came looking for you.”

“Oh yeah? Then that served you well.” She spun on her heels and walked off.

She spun around and slapped his hand hard. “Do you want me to break your nose again?” She was furious! How dare he ruin her assignment? How dare he show up like that after what happened last night? He had no grounds for being here.  No business following her around.

“Oh, you want to talk now?” she replied sarcastically. “No problem, Hikuro, we can talk now that you are ready; now that your big ego isn’t blocking your brain activity, now that you’re not busy breaking the arm of the only good lead we’ve had in freaking weeks!” Sam knew she was close to hysterical, but she didn’t care. She was simply, absolutely, utterly raging. “How in Hiad did you find me anyway?”

He shoved his hands into his back pockets and looked away.

“Oh, you didn’t dare…” Same opened her bag and looked inside. It didn’t take long for her to find the small black device signalling her position. She saw red. “You put a tracker on me?”

She paced back and forth like a caged lion. Her rage reached a new level. “I can’t believe this! What happened to ‘we must learn how to trust each other, whether we like it or not’, Hikuro? Is that how you show your trust? By putting a fucking tracker on me?”

“I do trust you,” he replied through clenched teeth. “I just don’t trust Phillip. He is a notorious womanizer, a snake that double crossed you once already.”

“I had the situation under control.”

“Oh please.” It was Hikuro’s turn to lose his cool “He was all over you, Sam! He was licking your fingers, for Hiad’s sake!”

“And why is that so bad, Hikuro? You said it yourself, I love playing games, don’t I? So, maybe that’s exactly what I wanted him to do. Have you thought about that?”

Hikuro lowered his chin and snarled. Sharp fangs emerged, but Sam didn’t get fazed. He could pull the “vampire in rage” act all he wanted, she would not be intimidated.

“I arranged this meeting, Hikuro, I need the information, and I was going to do anything to get it. As a matter of act, I’m going back there right now and offer my help in tending to Phillip’s wounds. Maybe he’s feeling lonely and vulnerable.”

“Sam, don’t you take another step.”

Strong hands grabbed her by the arms and pulled her close. His lips were inches from hers. His dark eyes flashed red.

“Because you are mine,” he snarled, then crushed his mouth against hers.