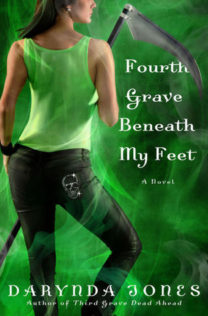 Fourth Grave Beneath My Feet (Charley Davidson, #4) by Darynda Jones

[box style=”rounded” border=”full”]Poor Charley is still recovering from the trauma of her attack. She believes PTSD can be solved with non-stop Home Shopping Channel, until Gemma and Cookie stage an intervention. [/box]

Charley is suffering from PTSD. It is hard to be a PI when you won’t leave your apartment, and Cookie has cut off her credit cards since Charley’s apartment is now filled with boxes from the Home Shopping Network.

Framed for murder, Reyes is finally a free man but that doesn’t mean a happily ever after for Charley and Reyes.  At least not yet. If it wasn’t bad enough that her father set her up with no warning, then Reyes did the same. It’s Charley’s turn to be pissed off.

Not only did he set her up, but now that he’s out of prison, he hasn’t stopped by to see how she’s recovering. How is she going to let him know how pissed off she is, if he won’t stop by? So she decides to serve him with a bill for her services for helping get him released from prison.

Reyes has been spending his new freedom skulking about town trying to find the demons who are looking for Charley. After their last attempt failed, they have a new plan. They are possessing the bodies of people with special gifts, usually those would can see the dead…and the special light that comes from Charley. The type of light like her friend Pari can see whenever Charley is around.

Uncle Bob asks for Charley’s help again. There is an arsonist burning down buildings around town and when Charley finally realizes that these are all residences that Reyes lived in and was abused in as a child, Charley is afraid her uncle will be sending Reyes back to prison.

Charley can push him off for a little while, since she does have a new client. A woman claims that she has been tormented by someone since she was a young girl but that no one has ever believed her. After spending most of her life with a step-mother who called her a liar and an embarrassment, Charley wants to help prove that Harper’s tormentor is real.

THOUGHTS:
Charley’s investigations are usually quite interesting and this story included a very interesting twist which was quite unexpected.

We also meet a new character who will become an important addition, deaf teenager Quentin will join out usual cast of characters.

My one frustration is the constant statement from both Angel and Reyes that Charley “can do anything” and “if she only knew what she could do…” I am getting as frustrated as Charley with these vague responses. They don’t even give her a hint like “Wouldn’t it be cool to shoot laser beams out of your eyes?” or “You’re inner light could kill a demon. Figure out how to make it shine.”   Nothing.

I highly recommend the audiobooks. Lorelei King does a wonderful job, especially bringing to life the quirkiness of Charley.

(I love the way Charley torments people on the phone.)

With renewed energy, I pulled back onto Academy–after hitting a drive-through for a mocha latte–and had just started for home when my phone rang.

“Yes?” I said, illegally talking on the phone while driving withing the city limits. Scoping for cops, I waited for Uncle Bob to stop talking to whomever he was talking to and get back to me.

My uncle Bob, or Ubie as I most often referred to him, was a detective for APD, and I helped him on cases from time to time. He knew I could see the departed and used that to his advantage. Not that I could blame him.

“Okay,” I said, “But I’m not sure what calling the medical examiner ay-sap is going to accomplish. I’m pretty sure his name is George.”

“Have you heard anything?”

Our conversations often went like this. Uncle Bob with his random questions. Me with my trying to come up with answers just as random. Not that I had to try very hard. “I heard that Tiffany Gorham, a girl I knew in grade school, still stuffs her bra. But that’s just a rumor.”

“About the case,” he said through clenched teeth. I could tell his teeth were clenched because his words were suddenly forced. That meant he was frustrated. Too bad I had no idea what he was talking about.

“She called me a doody-head once.”

“About the case.” His teeth were totally clenched again.

But I’d lost him. He was talking to another officer. Or a detective. Or a hooker, depending on his location and accessibility to cash. Though I doubt he would tell a hooker to check the status of the DOA’s autopsy report. Unless he was way kinkier than I’d ever given him credit for.

I found his calling me only to talk to other people very challenging.

The call disconnected as I sat at a light, wondering what guacamole would look like if avocados were orange.

I finally shifted my attention to the kid in my backseat. He had shoulder-length blond hair and bright blue eyes and looked somewhere between fifteen and seventeen.

“You come here often?” I asked him, but my phone rang before he could say anything. That was okay. He had a vacant stare, so I doubted he would have answered me anyway.

“Sorry about that,” Uncle Bob said. “Do you want to discuss the case?”

He asked me that every time he called now. “Peachy. Am I the case? If so, I can solve this puppy in about three seconds. I’m heading down San Mateo toward Central in a cherry red Jeep Wrangler with a questionable exhaust system.”

“Hurry, before I get away!”