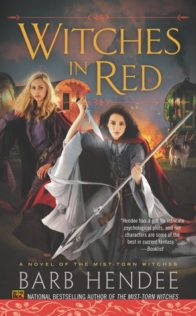 [box style=”rounded” border=”full”]I enjoy the series but we need more character development on our main characters.  We learn more about the gypsies we meet in this story, than we know about Amelie and Céline.  Again, we are derailed during the climactic ending while Amelie is dragged into the killer’s past.  [/box]

In the second story of the series, Prince Anton’s father has heard how Céline and Amelie caught the killer attacking young girls in Anton’s kingdom.  He has send a letter requesting the help of Anton’s seers.   His silvermines up north have stopped producing.  Something is happening and his guards are turning into beasts and killing the miners.

Anton has no choice but to help his father and he sends the sisters with a small battalion of soldiers. The reference to the Witches in Red is the red cloaks the sisters wear sort of like medics in a war zone wear a red cross. This is to protect them from attack on the road.

Jaromir accompanies them and hand picks some of the guards for protections.  Only Jaromir and one other guard will accompany them into the miner’s camp so that Anton’s men aren’t considered a threat to his father’s guards already camped there. Even though they come to help and leave their battalion behind, the Captain of the camp is wary of the sisters and since he outranks Jaromir who is a Lieutenant, they have an uphill battle to solve this mystery.

Among the miners are a family of gypsies who will teach the sisters a little more about their family heritage and also gives us another possible love interest for Céline.

Once again the momentum of the climax of the story is thrown off by Amelie giving us a look back in the killer’s past to see why he/she is responsible and how they are carrying out the dastardly deed.

Romancewise, Anton can’t leave the castle so there is little Anton/Céline interaction. This leaves an opening for the young guard who has shown an interest in Céline and who is getting a bit aggressive about it. I am sure this will become more of a problem in future stories. Since it is Jaromir who accompanies the girls, we get more Jaromir/Amelie time and even get a passionate kiss between the two. It is Jaromir who puts the breaks on this since he won’t take Amelie as his mistress but is not willing to offer her more. We’ll see how long that will last since he doesn’t seem to have any interest in women other than Amelie.

There are several things about this series that I like but it needs more in character development and something needs to be done about the flashbacks.  If I could figure how to do it better, I would be the writer and not just a woman with a book blog.  I just hate that it always throws off the excitement of the ending.

I only received review copies of books 1 and 3 so I was interested enough to purchase my own copy of book 2.  I just can’t give it more than 3 stars.