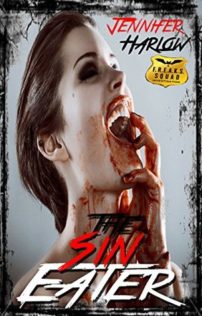 The Sin Eater by Jennifer Harlow

The long anticipated installment of the best-selling and critically acclaimed F.R.E.A.K.S. Squad series is finally here…

What’s a F.R.E.A.K. to do after all her hopes and dreams literally died in front of her? Telekinetic Beatrice Alexander went from flying around the country in a private jet, saving innocent lives from monstrous threats to living in her grandmother’s house, playing video games and drinking too much. Directionless, hiding from her problems and trauma, she will do anything not to confront her deadly actions that fateful night in North Carolina three months before. Any distraction will do.

Drawn to the sexy, powerful ruler of San Diego, Beatrice soon loses herself in the passion and luxury of the vampire’s world. But when she finds herself caught in the middle of a centuries old vampire rivalry, Beatrice must decide: how far is she willing to go for those she loves…and for herself?

I am hopeful that the author will be restarting the series and this story puts the series back on track.

There may be some series spoilers and definitely a bit of ranting. 🙂

A few weeks ago I asked if anyone gives an author another shot after they stop reading a series. This is the book I was taking about. I enjoyed the F.R.E.A.K.S. series when I was originally introduced to it. It has been three years since the last story and I spent the weekend doing a re-read of the first four books to get back into it.  I really enjoyed the characters and the snarky humor but the end of Book 4 seemed to leave us at the end of the series after ripping away the foundation itself, and I was very disappointed not just to lose the series, but in such a way that it could not be revived as it was.

Here’s what I liked about the series.  The premise of the story is a secret FBI off-shoot division of the F.R.E.A.K.S. (Federal Response to Extra-Sensory and Kindred Supernaturals). This team of agents all possess some special ability and are sent out to fight rogue werewolves, murdering vampires and other supernatural nasties, most times needing to investigate just like normal FBI and find the individuals responsible. So you have the crime drama with a paranormal spin. Add to that a love triangle and snarky humor and you had a great series until things fell apart with the last book.

The main character of the series is Beatrice Alexander who was a school teacher who used her telekinetic ability to save a child’s life and was subsequently shoved out of the closet and recruited to the agency. The other two main characters featured are: William Price, werewolf and leader of the F.R.E.A.K.S. and Oliver Montrose, a 500 year old vampire. These two hate each other but both love Beatrice.  Beatrice is in love with Will.  We spend the first three books juggling the love triangle and the investigations.

Beatrice and Will had sparks from their initial meet while Oliver simply wanted to seduce Beatrice, since that is his M.O. with all new agents…and just about everyone, but Beatrice keeps him at arms length.  As Beatrice gets to know Oliver, these two become best friends, which pisses off Will to the point he is pushing her away.

In the 4th story, High Moon, Beatrice finally gets Will to admit his feelings for her.  While this is a high for Will and Beatrice, it rips apart Beatrice and Oliver to the detriment of that story since Beatrice/Oliver moments were some of the highlights of the series.   Once the grumpy, self-loathing werewolf is in, he’s in 100 percent.  He wants them to quit the F.R.E.A.K.S., get married and immediately start that family they both want.  As the story goes on, we see Beatrice struggling a bit internally with her fast-forward relationship with Will which isn’t everything she dreamed it to be, but like Will, she is all-in now getting the man of her dreams, and won’t listen to reasoning from her best friend, April, or from Oliver that she is rushing into forever with a man who had no problem punishing her for months over her friendship with Oliver.  In the end, Will leaves the F.R.E.A.K.S. and abandons Beatrice.  Will will definitely not be returning to the series.

So Book 5 starts three months after the end of Book 4.  Beatrice is on suspension for her own actions in book 4 and is majorly depressed about losing the love of her life.  She has spent months hiding in her room, drinking and treating her loved ones like garbage.  As if that is not bad enough, Beatrice throws herself at a vampire we have met in book 3, Lord Connor McInnis.  He tried to blackmail Beatrice into being his consort since he wanted her F.R.E.A.K.S. connections and her telekinetic ability.  Once Connor accepted that the blackmail wouldn’t work, he seemed to turn on the charm and admit that he could see why Will and Oliver were fighting over Beatrice and he was open if she ever changed her mind.  And I started to like him a little and hoped he would be back. I am very sorry he did.

Connor is very happy to have Beatrice back in San Diego and now gracing his bed but we eventually see that he isn’t just being charming.  He is using Beatrice’s pain, loss and uncertain future to control her.  I had to put the book aside about 30 percent in because Beatrice’s depression and her allowing herself to be used by Connor was just too depressing for me and I needed a break.

Once Beatrice shakes off the depression, a story emerges which brings us back to the original feel of the series.  At this point, the Beatrice we knew starts to re-emerge.  She starts investigating a missing person and eventually Oliver returns to try and free her from Connor’s clutches.   While Oliver and Beatrice are reconnecting, Beatrice admits that she doesn’t care about Connor, she was just using him as a distraction.  Connor is not interesting in giving up Beatrice since he was so close to achieving his original goal — which is controlling Beatrice and her power.

This puts Beatrice and Oliver in the middle of a turf war between Connor, Lord of San Diego, and the ruler of Los Angeles, and the story gets very exciting.  You just have to slog through Beatrice’s depression and self-destruction to get here.

I hate that Will was ripped out of the series but I will admit that in the long run, Will was too controlling and boring, and while there was a zing between them, there was no fun to their relationship.  Obviously there would have been no more stories for Beatrice since Will intended for them to retire.  So, in the end it was either drag out the love triangle for more stories or Will needed to exit the series.

Beatrice and Oliver’s relationship is all about fun and while she got a zing every time she saw Will, she gets a butterflies every time she sees Oliver.  But the Will/Oliver love-triangle was needed as a wedge between them since Oliver’s original intention was to check off the new agent from his to-do list.  This became more important after he realized that is nemesis Will was so attracted to her.  The fact that Oliver couldn’t get Beatrice to fall for his charm (because of Will) allowed their friendship to grow.  In the end, they had a stronger bond then Will and Beatrice ever did.

Are you still here?  😉  Okay, here are my final grumbles and hopes for future stories.

Grumble #1 – This book had more passionless sex with Connor then we had when we finally got Will and Beatrice together.  I say passionless because Beatrice was letting Connor use her to distract herself from life so while there was sex, it lacked the buzz you get when your romantic couple finally connects.    I would have loved to have some of these scenes with Will, the man she desperately wanted.

Grumble #2 – Beatrice spent her depressed part of the story lamenting all her lost chances with Will and “if only I kissed him then…would things have been different.”   It was all about missed opportunities and not wasting time.   When Oliver comes for her, they literally spend a whole chapter telling each other “I’m not a good person.  You are a good person.  I am a better person because of you.”  Blah, blah, blah.  After a chapter of this, with a few aborted I love you’s that never got said, Beatrice falls asleep and Oliver immediately does something that hurts Beatrice.  They just aired their problems and apologized for their hurting each other.  They just told each other how important they were to each other.   And now there is no Will between them, so you would think that a guy who spent the last year in the friend-zone, who was now holding the woman he loves in his arms, would have stuck around and just held her, being boring and watching her sleep, rather than run off and tell all their secrets and past issues to someone else and crying on their shoulder.  WTF?

Grumble #3 – The cover is awful and the title is off putting.  The title makes sense after you read the story, but I think only former F.R.E.A.K. fans are going to pick up this up and give it a try.

Hope #1 – This story ends in a way that might just put the whole series back on track, obviously without Will and some others that left or died  on missions while Beatrice was in her funk.  I really hope that means the author is willing to re-boot this series and that we will not have to wait three years for a next story.

Hope #2 – While Beatrice laments lost chances with Will, she and Oliver seem to be signing “we have forever and ever”.   Yes, it would feel off if Beatrice jumped from one love of her life to the next without some brief pause, but everyone they know is already aware of her connection to Oliver as well as Will.  She didn’t seem to have any problem playing hide the stake with Connor so let’s not pretend that she’s keeping herself pure for her lost love.  I just don’t want to be fed some B.S. which keeps Beatrice and Oliver from becoming a couple.  They can be a couple and solve paranormal crimes as part of the team.  The overall story won’t be effected.  You can’t lament missed opportunities one moment and then think we have all the time in the world the next, especially when there is no longer an impediment to their having a relationship.

Overall, my hope is that the purpose of this story was to set all the wrongs right so that we can start fresh with new adventures of the F.R.E.A.K.S.