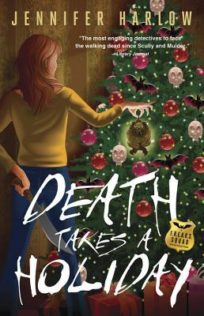 A supernatural love triangle + one indecent proposal Beatrice Alexander can crush a sixty-foot snake with her mind, but she can’t take any more of the drama that’s tearing apart F.R.E.A.K.S. Should she give it all up — her job as a secret agent and the possibility of a relationship with Will, the gorgeous werewolf? Bea’s hoping to get it all figured out on a trip home for Christmas. But soon her hunky ex-boyfriend wants to rekindle their romance. Then, a powerful (and super hot) vampire lord offers Bea an impossible ultimatum: leave San Diego and her family forever — or become his lover.

Beatrice Alexander thought life was hard being a schoolteacher, especially one with a deep dark secret. Beatrice is psychokinetic. At least back then she thought kids hopped up on sugar was the worse thing she had to face. That is until she was recruited by the FBI for the F.R.E.A.K.S. division (Federal Response to Extra-Sensory and Kindred Supernaturals). Now her days involve zombies, witches, vampires and werewolves.

As if the dangerous supernaturals they fight against aren’t enough to keep a girl busy, Beatrice also has her hands full with men in her life. Her vampire best friend, Oliver Montrose is gorgeous and flirty and has made more enemies than friends in his 500 undead years. Some of whom are working with Oliver and Bea at the FBI, including their boss, Special Agent William Price. The sexy werewolf stars in most of Beatrice’s fantasies, but her friendship with Oliver is causing Will to give Bea the cold-shoulder treatment, and she’s had enough! Enough of being surrounded by people who don’t support her ideas, of all the overprotective, alpha-male, testosterone-filled idiots who try and keep her in the background where it’s “safe”, and she has definitely had enough of being forced to choose between Oliver and Will.

Beatrice is going home to San Diego for the Christmas holiday…maybe forever. It is something she will have to think about while she is away. Running for her life on an almost daily basis has become a great exercise plan, but add to that the fact that she’s been chased by almost every deadly supernatural alive and undead to the tension around the office, most of which surrounds her, and Beatrice is starting to think about returning home to her family and to being a boring school teacher. And just when she starts thinking about boring…oh, here comes her old boyfriend, Officer Steven Weir. He is hoping Bea wants to rekindle their relationship. Oh, good God, no! Not only is he is definitely no Will, or even an Oliver, he was the epitome of boring which is the main reason she broke up with him the first place.

Although Beatrice came home to get away from the men in her life and the danger from her job, it appears men and trouble will seek her out. She’s been threatened–I mean, invited by the local Vampire Lord Connor McInnis to come to see him. He’s heard about Beatrice’s gift and her exploits with the F.R.E.A.K.S. and he will make an offer she can’t refuse–especially since he has vampire law on his side–she must leave San Diego and never see her family again or leave the F.R.E.A.K.S. become his consort for life.

Now Beatrice will have to suck it up and ask for help of the two men she left behind. Damn! Maybe there still time for her to enter the convent after all.

THOUGHTS:
I adored this story and these characters. This just such a fun story. I picked it up Sunday morning and didn’t go to sleep until it was finished. Then I picked up copies of books #1 and #2 in the series. Yeah, yeah, I know, “When the hell are you going to read them. We’ve seen your TBR list.” Hey–back off. I’ll get to them…soon…eventually…just shut up.

Beatrice was delightful, Will was sexy and overprotective and Oliver was such a flirt. Even vampire Connor was sexy and funny. I hope we’ll be seeing more of him in future novels.

I will definitely find the time to read the first two books (Stop it! I will!) and I will be watching out to see where she is taking us in book #4. (Cross your fingers for some naked, sexy time with Will.)

Another book that was hard to choose a favorite scene.

Great. Getting felt up twice in two days. A new record. Rolling my eyes and sighing, I lift up my arms and spread my legs. As Pippin pats me down, and Cockney rifles through my bag, the yummy bartender watches with a smirk and raised eyebrow. The others could care less.

“Not here either,” Cockney says.

“Why would I bring weapons to a friendly sit-down?” I get my purse back. “Besides, I’m on holiday. I don’t usually pack my Uzi. So if you could get your boss, please? I’m missing It’s a Wonderful Life.“

The bartender full on smiles, his blue eyes crinkling. I am a sucker for crinkly eyes. Footsteps above draw my attention away from the eye candy. A red headed man with short hair, goatee, charcoal gray slacks, white dress shirt, and gray vest steps into view.

“Matilda, can you bring me up last night’s receipts?” he asks with a clipped British accent.

That must be him. He merely glances at me as the female bartender stops chopping.

“They should be in the safe,” Yummy says with an Irish accent. I almost melt inside. Irish accents are my Kryptonite. I’ve watched all of Colin Farrell’s movies and interviews a dozen times just to hear him talk. Liam Neeson’s too. And I wore out my copy of Once. I really hope I don’t have to kill him now.

“Everything fine down here?” Connor asks the Irishman.

“Yes,” he says with that voice. I really must be hard up if my G-spot is tingling now. I’ll be rubbing up against trees in the middle of gunfights pretty soon. “We shall be up in a minute.”

Matilda the bartender locates the receipts and walks upstairs behind the departing Connor. He doesn’t look like much. The three bodyguards will be hardest, especially the vamp one.

“Care to sit?” Irish suggests, motioning to the bar. I glance around the room, but nobody seems to care about me except my escorts, so I sit. As I get closer, I notice I was wrong about his eyes. They’re violet like Liz Taylor’s. I’ve never actually met anyone with real violet eyes. He smiles again reassuringly. “May I pour you a drink?”

He tsks. “You obviously have no Irish in you.”

Is he flirting with me? “Why is that?”

“We Irish will accept a drink even from our worst enemies.”

“Are you guys my worst enemies?”

He puts both hands on the bar and leans in toward me. “If we are, Special Agent Alexander, then you must not be doing your job well.” His eyes meet mine, and he smiles. Flirtatiously. And yes, a sliver of lust rushes through me.

I mask it by looking away. “Are you trying to capture my mind, Danny Boy?”

“I would never presume to do that, Special Agent. Why mar perfection?”

I swear this guy and Oliver must have studied under the same seduction teacher, Mr. Casanova de Cheesy. “Rein it in, Danny Boy,” I warn. “I’m here to meet your boss, not participate in Flirting 101.” Heck yeah! Go, tough Bea!

The vamp frowns. “I apologize if I offended. It is not every day I can enjoy a conversation with a woman of your caliber and beauty, and I mean that with sincerity. I simply could not help myself.”

Okay, maybe I could stand to hear a little more, but I don’t let him know that. “It’s okay, I’m used to it. I live with a vamp. I know if your mouth is moving, you’re flirting.”

He cocks one of those violet eyes. “You live with a vampire? Who is this fortunate man?”

“And you live together?”

“Not like that.” I say. “We live in the same house. Separate bedrooms, though.”

“But it is true you walked unarmed into a room of twelve vampires to save him from true death?”

“I wasn’t unarmed, and it wasn’t twelve. More like eight.”

“But you were almost directly responsible for the death of the Lord of Dallas.”

“You may as well have wielded the sword yourself,” Irish says. “And is it true you dispatched, in a single twenty-four hour period, fifteen vampires including two of whom were over three hundred years old?”

My spidey sense is tingling. “You know, for a lowly bartender, you seem to know a lot about me.”

“It is my job to know these things, Agent Alexander.”

Ugh. I’m an idiot. I fell for a classic bad guy move that anyone who’s watched a Bond flick should have seen a mile away. Now I’m really glad I kept the drooling to a minimum. I lean back in my chair with a crooked smile. “Lord Connor I presume.” He bows his head and all the other vamps in the room chuckle at my stupidity. There goes my credibility. I am so going to die. “Nice one.”

“I am afraid you caught me on my night off,” Connor says, “Otherwise I would have greeted you in proper attire.”

“I was thinking more along the lines of body armor and shotgun.”

“You’re cuter this way,” I say with a sly smile. “Shotguns don’t really do it for me.”

“And what does, pray tell?”

I lean in a little. “Irish accents and crinkly eyes.”

He grins back. “In that case, we should continue our conversation upstairs? With a bit more privacy?”

I lean in more so we’re close enough to kiss while meeting his eyes. “Thought you’d never ask, your Lordship.” And the Golden Globe for acting cool while really wanting to run screaming from the building goes to…the corpse of Bea Alexander.

One response to “Review: Death Takes a Holiday by Jennifer Harlow”