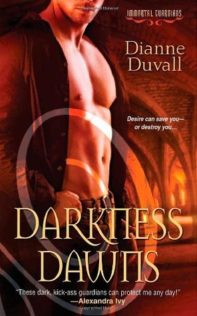 One early morning, music teacher Sarah Bingham overhears men talking in a field close to her secluded home, and she goes over to investigate. When she find one man staked to the ground being tortured and stabbed by two others, she doesn’t think, she acts and saves the man from his attackers. She takes him home and gives him first aid. What she doesn’t know is that Roland Warbrook is an Immortal Guardian who was hurt fighting vampires.

Roland Warbrook has never met anyone like Sarah in his almost 950 years. She is brave and kind and oh so beautiful. After Sarah gets over her initial shock of learning who and what Roland is, they are helpless against their strong attraction for each other.

But the vampire leader has a personal vendetta to settle with Roland Warbrook and he has waiting over 200 years to finally kill him, and if his best chance is using human Sarah as bait, then so be it.

So now Roland, with the aid of the other Immortal Guardians, needs to solve the puzzle of who is trying to kill him and why, so that he can protect Sarah and return her to her normal human life.

This is the first book in the series and although I read Book 2, Night Reigns, first and had a little insight to some happenings in Book 1, it did not diminish the enjoyment of this story at all.

Roland is known as being “antisocial” as his friends like to point out to him through the book, but even from the beginning his demeanor with Sarah is completely different. He is warm and caring to her, and you can see from early chapters of the story how quickly and strongly their bond grows.

I have greatly enjoyed the first two books in this series and am looking forward to more. I am definitely going to be listing this as one of my favorite series to read.

Sarah sensed movement about her face before Roland’s hand withdrew.

“What are you doing?” He sound surprised.

“Stopping you from doing something stupid.”

Fear surged to the surface again at that ominous warning.

“Feed first, then heal her.”

What did that mean—heal her? Heal her as in render first aid? Why was it so imperative that he feed first?

She recalled the soothing heat that had suffused her chest when he had touched her ribs moments ago. The sharp pains had vanished, as had the ache. She was once more able to take deep breaths.

What had Roland done to her?

“When she wakes, I don’t want the first thing she sees to be me holding a bag of blood to my lips,” Roland bit out.

Oh crap. He is a vampire.

“Then hurry up and feed before she wakes.”

“Then leave the room and feed.”

Against her will, Sarah’s eyes flew open and sought Roland’s reaction.

He was kneeling beside her, his hair mussed and damp with perspiration around his face. The terrible wound in his neck was sealed and no longer bled. A long cut followed his jawline from his earlobe to his chin where one of his opponents must have tried to slit his throat again and miscalculated, laying open the flesh so deeply that she feared she would see bone if she rinsed away the blood.

His shirt was saturated with the red liquid, his clothing torn in numerous places. He was also holding his left arm close to his body in a way that made her wonder if it weren’t broken.

Battered and looking no better, Marcus stood behind the sofa. In one hand, he held a bag of blood similar to those used in hospitals.

Neither man paid her any attention as they stared at each other.

A muscle in Roland’s cheek jumped. “Don’t you think that would be rather foolish, considering?”

“Considering what—that she’s smart, pretty and good with a gun?”

“No,” Roland said, his voice laden with sarcasm. “Considering she would have used her gun on us if you hadn’t made her promise not to. As soon as she wakes up, she’s going to run screaming for the door.”

Okay, she knew he was a vampire or whatever, but felt guilty anyway because running and screaming had been her first impulse and he looked as if he knew that and his feelings were hurt.

“Why, because you know her so well?”

“No, because you’re so distraught over her injuries and her potential fear of you that you’ve missed something pertinent I have not.”

His gaze still on Marcus, Roland brushed his fingers through her hair in what seemed an unconscious gesture of affection. “And what might that be?”

Marcus smiled smugly. “She’s been awake ever since you laid her on the sofa and has not run for the door.”