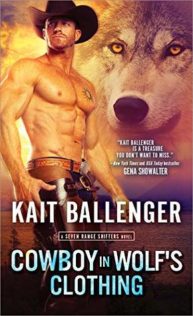 Born a cowboy and bred a warrior...

High Commander Colt Cavanaugh has spent his life defending his pack and its sprawling ranchlands. But the hardened Grey Wolf soldier has a dark secret that could destroy his life forever.

Belle Beaumont is a wanted woman, on the run from the wolf pack that kidnapped her. When fate brings her face-to-face with the Grey Wolf High Commander himself, rivalry becomes passion, and suddenly more than just her freedom is at stake.

Colt will fight to the death for the healing Belle brings to his battle―worn heart―and for this cowboy wolf, all's fair in love and war...

This story left me questioning my loyalty to the main characters which is a weird feeling.

Dr. Belle Beaumont was a wolf-shifter who wanted a home and a pack.  She had enough of life on the road with the rodeo circuit and as a rogue wolf.  Unfortunately for her, her desire to join a pack got her seduced by Wyatt, who promised her a home with the Wild Eights pack.  Unfortunately for Belle, once she figured out that this was not the kind of pack she wanted to be part of, it was too late for her to get out.  They weren’t going to let a doctor get away, not while they were at war with the Grey Wolves.

That is how Belle found herself behind bars at the Missoula Grey Wolf ranch, they thought she was a loyal member of the Wild Eights and were holding her for the Grey Wolf Commander to pick up and decide what to do with her.    Belle might be an unwanted rogue wolf, but she isn’t stupid and when the pack was distracted by a vampire attack, Belle escapes her prison, and even manages to save the life of the Commander sent to pick her up, Colt Cavanagh.   You would think saving his life might earn her some leeway and he would let her return to her former life  but why would Colt be any better than the others who held her.  No one asked her why she was with the Wild Eights or even if she wanted to be there.  Now she was as much a prisoner with the Grey Wolves as she was with the Wild Eights.

Belle needs to convince the by-the-book Commander that she means their pack no harm before he throws her back into a cell and forgets about the attraction between them.

I was offered a review copy of this book by the author but decided to start with Book 1 of the series before reading this one and I am very happy that I did because this book pissed me off!   I spent most of the story seeing our pack, the Grey Wolves, as a bunch of bigoted assholes.  I understood in Book 1, Cowboy Wolf Trouble, where they didn’t approve of Wes and Naomi’s relationship since she was a human. For one, humans weren’t supposed to know about the shifters and secondly, they can’t interbred so mating with Naomi won’t produce more cubs for the pack.  So I can see some objection against having a human girlfriend.

But the pack seemed to be more bigoted against rogue wolves than even against humans.  In Belle’s case, her mother chose to leave her pack (we will get back to that) and poor Belle was born a rogue.  She didn’t chose to be a lone wolf, she was born without a pack.   The Grey Wolves had less issues with those born into a “bad” pack like the Wild Eights than someone like Belle.  Considering the shortage of shifters and that they can’t interbred with humans, you would think that a pack would jump at the chance to bring in fresh female blood so there is less interbreeding in the packs.

After the war, the Grey Wolves offered the Wild Eight soldiers a chance to join their ranks (with very, very long probation period) but Belle as a rogue was treated like a leper.  In fact, she was imprisoned because she was considered a member of the Wild Eights but no one offered her the same chance to join the pack as they offered the soldiers. No one even talked to her about why she was part of their pack.  They knew she was only there three years and obviously wasn’t born into the pack.  They even seemed to know that she was recruited (seduced) by Wyatt but again, no one bothered to ask why she stayed, which she did to protect someone weaker who would be mistreated without Belle’s care. She’s a shifter doctor, something that is rarer than unicorns, yet no one said “someone go charm the doctor and see if she wants to work here.”  No, they treat her like a murderer.   The Wild Eight soldiers, who the Grey Wolves were fighting, were treated better.

These were our “good guys” yet we were being told that someone like Belle was worthless simply because she was born outside of a pack.   She isn’t the only one since we learn that Colt’s father took him in as a child after his real father killed his mother.  Colt’s new father told the pack that he fathered Colt with his rogue mother and told Colt that he could never to let the pack find out about the lie.  Again, what kind of assholes wouldn’t allow one of their members to rescue and adopt an innocent child whose mother was murdered.  Another innocent child who didn’t chose to be born outside of a pack but who somehow managed to grow up as a loyal member of that pack regardless.

When Colt finally comes clean to the Grey Wolves about his real parents, some of them already guessed/some were surprised, but when he was asks if they are going to toss him out or simply kill him, they are all “We’re not assholes!” So while we did see some prejudices toward rogue wolves, this whole issue of how rogue’s suck was mostly from Colt’s own head from his adopted father’s influence.

In this case, I had to step away from the story and cool off before I could write this review.  I was very happy that this was not my first introduction to the series because I would have judged the pack harshly based on Belle’s treatment (through the eyes of Colt).  This was even more frustrating since the first story featured Wes, who was the former leader of the Wild Eights and who now held a prominent position in the Grey Wolves hierarchy.  I kept wondering why Colt would think so badly of the Grey Woles that they had more respect for the former leader of their dangerous enemy than an innocent rogue born out of a pack?  Really?   Even Wes had to spell this out to Colt and ask why Colt would think the Grey Wolves would disrespect a loyal pack member who rose to the rank of Commander?

The only thing I was very unhappy about in the end (and it really isn’t much of a spoiler) is that Colt comes to Belle at the end and tells her that they figured out who her mother is and that the pack she ran away from was the Grey Wolves so technically Belle was a Grey Wolf so welcome to the pack.  F.U.!!!  Having Belle’s mother be a former Grey Wolf (never explaining why she felt the need to run away from the most awesome pack in the world) before welcoming her into their pack just puts them back into the realm of separatist assholes.  They should have just welcomed her into their pack as a rogue.

The next book features the leader’s little sister, Maeve, who is a sweetheart and Jared, who is another former Grey Wolf who was forced out and who is the mysterious “Rogue” who has been looking out for rogue wolves.  I am looking forward to getting to know Maeve better, and I am hoping that we aren’t going to see more of the worst of the Grey Wolves.

2 responses to “Review: Cowboy in Wolf’s Clothing by Kait Ballenger”