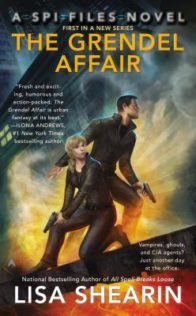 [box style=”rounded” border=”full”]This series is perfect for anyone who enjoyed Molly Harper’s Good Girl or Naked Werewolf series. The writing is lighthearted. The characters are funny. And there are so many little zings as tossed in everywhere it was hard to find a favorite scene. Not everyone likes their vampires and werewolves with a side of fun, but I certainly enjoyed it. [/box]

After the introductory novella for the SPI Files series in the anthology Night Shift, I had to pick up a copy of The Grendel Affair.

Makenna Fraser is the newest member of SPI (Supernatural Protection & Investigation). She just arrived in NYC from Weird Sisters, North Carolina. Weird Sisters is located on a mystical fault line and seems to draw all types of paranormal creatures. Mac is no supernatural, just plain old human, but she has the ability to see through magic veils to the creature beneath. She has been assigned a partner (read: babysitter and bodyguard), former NYPD officer, Agent Ian Bryne. The last three seers that SPI had on payroll have all died…badly, and it is Ian’s job to make sure their latest seer isn’t taken out by one of the bad guys that she is going to point out.

In The Grendel Affair, someone is plotting to bring supernaturals out of the closet by releasing grendels (yes, out of Beowulf) into Time Square on New Years Eve to wreak havoc and eat revelers in front of millions of TV viewers. Someone has figured out how to cloak a 10 foot grendel from notice and it is up to the newest member of SPI to point out the hidden grendels so the rest of her team can take them down.

Without her ability, SPI would have no way to locate and stop the nightmare attack on the unsuspected crowd, and someone is well aware of that. Not only are they getting ready to release grendels, they will do whatever is necessary to remove Mac from SPI.

Although Mac is not a trained agent, she uses her intelligence and back-mountain wits to think outside the box to take down the group of paranormals who no longer want to hide in the dark afraid of their “food.”

One positive coming out of this story is that her sexy hot, super-agent partner will start training Mac in weapons and hand-to-hand combat so that hopefully in future novels Mac will have more to bring to the group than “I might not be a sharpshooter yet with a gun, but I could aim the hell out of a flashlight.”

THOUGHTS:
This is a fun new Urban Fantasy. I am sad it is only two books so far although Goodreads indicates that another one will be released sometime in 2015. Most paranormal and Urban Fantasy series are very serious about the topic. I love when an author can make it fun as well as entertaining. I also enjoy when the world of supernaturals are treated as just another day at the office.

I love the lighthearted humor to this writing. I was going to download the audiobook of the next book in the series which comes out next month, but I just couldn’t wait and I downloaded the ebook copy instead.

Mac goes moonlighting to help a friend catch a pest in his shop of oddities and is caught by her partner.

“That’s quite the traveling party you’ve got there,” he said.

Back home, in my younger days, I’d been busted by our local sheriff for underage drinking, and it had only made it worse that she was my aunt. This felt exactly the same. Though I reminded myself that Ian Byrne was only a couple of years older than I was, and he could only make me feel like a delinquent teenage if I let him.

I wasn’t going to let him. I wasn’t doing anything wrong.

Ian had what looked like a small camera bag slung over one shoulder. I looked closer. Nope. Not a camera. NVGs. In a case identical to the one in my messenger bag. Apparently I hadn’t been the only one signing out gear.

“I asked. He told. I’m not about to let you try to catch a nachtgnome by yourself.”

I snorted. “They get drunk from a couple shots of booze.”

It was too cold to stand out in the street and argue with him. “I didn’t tell you because Ollie needed this done tonight, and you had a date.” I grinned. “Or is this business before pleasure? Come here bag a gnome; go there and bag a…”

There were only six words in that sentence; but to me, every last one of them felt like he was saying that he didn’t consider me to be smart and he didn’t like me. I squashed that line of thought. It seemed that every time I got around Ian Byrne, paranoia became my new best friend.

After a couple seconds of awkward silence, Ian jerked his head toward the door. “So what kind of liquor did you get for Shorty in there?”

He raised an eyebrow.

“Accidents happen,” I said. “I got some insurance.”

I stepped past Ian and started working on Ollie’s locks. He’d given me the keys and the code to deactivate the alarm system. Ollie had three dead bolts, each with a different key on what looked like a glass door with a wooden frame. Anyone trying to break in would be in for a surprise. The wood was steel and the glass was bulletproof.

I had to give the door a bit of hip action to get it open. A bell rang. I looked up. Ollie had one attached to the top of the door. Crap. So much for stealth.

A round red light at the top of the alarm system keypad started flashing. I had ten seconds before flashing turned to banshee shrieking. I fumbled the piece of paper out of my pocket that I’d scribbled the numbers on, entered the deactivation code, and the red light went out.

Ollie had never had a break-in. No surprise there. Anyone looking to score something to steal had always given Ollie’s shop a wide berth. One, the place was spooky enough in the daytime; and two, when they went to fence what they’d stolen, the only person who’d buy stuff that bizarre was Ollie, which kind of defeated the purpose and the effort.

I closed the door behind us, successfully got the NVGs on and focused, and did a slow scan of the shop.

Which mean absolutely nothing. From what I’d been taught in my classes, nachtgnomes tended to stay hidden–unless you made it interesting for them, either with whiskey or exposed skin. All my pieces and parts were covered and going to stay that way. I’d brought booze to this party, not snacks.

The gnome had to know we were here. Aside from the bell, it was virtually impossible to take more than three steps in Ollie’s place without bumping into something. My goggles were to ensure that I didn’t bump into anything that bit.

If I turned on the lights, we’d be able to see, but the nachtgnome would burrow his way into something dark and stay there. So the dark was to make him comfortable, and the Jack was to make him sociable. I scanned the area around the counter and froze. The mummy was registering red and orange–at least the head was. And the contents were…moving.

I damned near jumped out of my skin.

I shot him a glare that would have been a lot more effective if he could have seen my eyes, then something scurried over by the case of voodoo dolls, bare feet pitter-pattering like wet rubber on the wood floor. I had an immediate and overwhelming urge to jump on a chair, flap my hands, run in place, and squeal. I had to grit my teeth to keep from doing any and all of the above.

My thirsty customer had arrived.

One response to “Review: The Grendel Affair by Lisa Shearin”