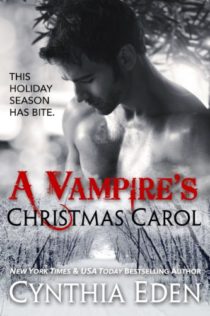 [box style=”rounded” border=”full”]Currently on sale for only $.99. Don’t miss a chance to read this creative paranormal retelling of the classic, A Christmas Carol.[/box]

Fans of Cynthia Eden and paranormal romance will love this twist on the classic story. Our paranormal scrooge is played by Ben Prescott.  A demon named William Marley is sent to show Ben the way by way of three “ghosts” played by a demon, a shifter and a surprise from Ben’s past.

Ben was once a happy man, in love with Simone and living a normal, average life. Until two things happened: First, Ben was attacked and turned into a vampire and the second is that Ben holds himself responsible for his love’s death. But that was Christmas ten years ago, and now Ben lives to hunt and hurt others. Each passing year, he losses more and more of his humanity and soon it will be too late for Ben. He’ll become the monster living in the shadow and Hell will be his final destination.

His three ghosts will remind him of the man he once was and what he will become if he doesn’t stop his attacks.

THOUGHTS:
I thought this was a clever re-telling of A Christmas Carol using Cynthia Eden’s standard crew of vampires, demons and shifters. I read it last year but a little late for holiday posting.

I will admit the $5.99 paperback price is a bit steep for the 75 page novella since it really doesn’t bring anything new to the story, but you can’t miss with the sale price of $.99 for this holiday treat.

“Do you know what tomorrow is, vampire?”

Sure he did. He might be a vamp, but he wasn’t an idiot. As he’d slogged through the town of Desolate, Ben hadn’t exactly missed the decorations that hung from every storefront. “Christmas.” Just saying the word made pain wrench through him. He’d become a vampire ten years ago, right before Christmas. He’d lost her, right after the clock struck midnight on what the humans thought was such a happy day.

Ben raked a hand through his hair. “I fucking hate Christmas.”

William’s lips twitched, then he waved his hand toward the bare cabin walls. “That would explain the lack of decorations in your, uh, charming abode here. You know, a tree, some garland — shit like that would really liven up this dump.”

“Talk about stating the obvious.” William sighed. “I’m a demon, but I’m not evil.” His lips definitely twisted into a smile this time. “And I fucking love Christmas. I mean, seriously — presents? Spiked eggnog? How does it get better?”

Ben’s temples started to pound. “Get out of my house.”

“I don’t know that this place qualifies as a house.”

The demon was a total dick.

William shook his head. “Besides, I can’t just walk away from you. That’s not how it works.” His gaze dipped around the little cabin once more. “Maybe I’ll decorate it for you. I’m sure she would appreciate some Christmas touches.”

Right. The demon was a dick, and he was insane. “There aren’t any women here. Just one psychotic demon and–“

“A vampire who is getting his last chance to change.” The words held no humor. Only cold, hard promise. “The others downstairs, they wanted to mark you as evil already. To just put your name on the list and consider your fate sealed.”

“The powers-that-be have looked ahead, you see, and they know what you’re going to do.”

“But I don’t think you’ve crossed the line yet,” the demon said with another shake of his head. “And since I owe you, I agreed to do this little routine once more.”

William shrugged. “I’ve done it a few times in the past. Sometimes it works.” Sadness crept over his face. “And, sometimes there is no saving the lost.” His gaze raked over Ben. “The debt I owe you will be paid by midnight. One way or another.”

“I don’t care if your blood burns,” Ben said, pushed too far. “I’m about to drain you.”

The fire flared again, and in the next instant, William was right in front of Ben. The demon was fast. “You should be more grateful. You’re immortal. One of the most powerful vampires I’ve ever come across. But you’re going down a dark and dangerous path, a path you don’t want to take.”

Ben offered him a grim smile. “It’s the only path for me.” Blood and death and demons. Yeah, that all seemed right.

“Once you wanted more.” William grabbed Ben’s hand. The demon’s touch burned, and smoke rose from Ben’s skin. “You just need to remember that. Remember who you were before.”

Ben twisted his wrist, but, even with is vamp strength, he couldn’t break free from William’s hold. “Let. Me. Go.” Or he’d be ripping the demons’s head off in the next five seconds.

“I’m the first visitor of the night.”

“There will be three, and in the end, the choice will be yours.” William glared at him. “But I’m telling you, asshole, make the right choice.“

Ben flashed his fangs and went for the demon’s throat. He braced himself for the acid burn to come. He’d drunk from a demon before, and he knew the taste would be a real bitch.

Before his fangs could slice into William, flames erupted around them. Surrounded them. And Ben knew he was about to die. His last thought…

One response to “Review: A Vampire’s Christmas Carol by Cynthia Eden”