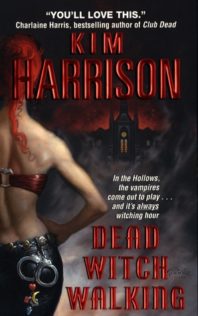 All the creatures of the night gather in "the Hollows" of Cincinnati, to hide, to prowl, to party... and to feed.

Vampires rule the darkness in a predator-eat-predator world rife with dangers beyond imagining - and it's Rachel Morgan's job to keep that world civilized.

A bounty hunter and witch with serious sex appeal and an attitude, she'll bring 'em back alive, dead... or undead.

I just lost 13 hours and 14 minutes of my life. I am at a loss. I don’t understand what so many people loved about this story. It went nowhere!

I can’t discuss this without some mild spoilers. You have been warned.

Rachel Morgan is a witch and at the start of our story, she is also a runner for I.S. (Interland Security). Interlanders are what they call supernaturals: witches, werewolves, vampires, fairies, etc. When you are an Interlander and you screw up, I.S. sends a runner to grab you and bring you in. The humans also have a division of the F.I.B., Federal Interlander Bureau, but since humans are no match for the Interlanders, the F.I.B. usually lets the I.S. take care of its own problems.

Rachel has become more and more unhappy with her job and the runs she has been given and after capturing a leprechaun, who offers three wishes to let her go, Rachel decides she might just take her up on the offer, buy out her contract with I.S. and go independent. Morgan’s friends, okay more like co-workers, Jenks, a 4″ tall pixie, and Ivy, a living vampire, try to talk Rachel out of leaving the I.S., then they decide they want in on her new agency and her wishes from the leprechaun.

Turns out Rachel’s boss doesn’t care about Rachel leaving. He’s been giving her crappy assignments and making sure they fails so she would leave. But when he finds out that Ivy, his best runner, is leaving with Rachel, he blames Rachel and puts out a contract on her head.

Most of the story deals with Rachel trying to stay alive and her trying to bring down a local businessman who she believes is behind all the Brimstone in town and the I.S. and the F.I.B. haven’t been able to pin this on him. Rachel thinks if she can bring down Trent, then the I.S. will have to call off the contract on her life.

Let the complaining begin…This book went no where! 13 hours and it went NOWHERE! Even before Rachel makes it home on the bus, her landlady already knew she was out of a job and all her things were in the hallway and already bespelled to kill Rachel if she touched anything. With little money and no where else to go, Rachel decides to crash at the new office space that Ivy had already rented which turned out to be a former church, complete with graveyard.  While Ivy and Rachel worked together from time to time as runners, they weren’t friends so Rachel is confused why Ivy, who was so successful and much loved at I.S. wanted out.

As far as witches and magic in a story, I like to see my witches do magic.  I liked Ivy in Slouch Witch because her more impressive spells were made up so she could be lazy.   I didn’t like Harry Dresden in The Dresden Files because most of the time he didn’t do anything impressive.    Here Rachel does have a magic wand, all her magic is put into amulets, some she simply buys at the store because it is too much trouble to buy ingredients and boil the potions.  With the graveyard, also came an herb garden, so we see Rachel start cooking her own recipes and making her own amulets.  But, simply put, if you don’t have your magic amulet with your special spell on you, you got nothin’ and you are dead.  Also, Rachel doesn’t do offensive spells or draw from the layline going through the cemetery since that is dark witch magic.  So although Rachel has a dead threat over her head, she can’t do any spells of attack, she can only use defensive amulets which was kind of boring.  Rachel did do one interesting spell and that turn her into a rodent so that she could infiltrate the bad guy’s offices.  She does get caught and he enters her into the underground rat fights.  That section was interesting but that’s it.  That was the only good I part of the story.

There are living vampires and dead vampires but that is pretty much all we know.  This first story doesn’t go into any more detail than living vampires can go out into the sun and dead ones can’t.  We know Ivy is abstaining from blood drinking, but no details of why or how that effects her overall.  The biggest problem I had with Ivy and Rachel is the fact that most of the time Rachel was afraid of Ivy and her fear amped up Ivy’s vampire nature and things would get a little iffy whether Ivy would attack.  We do get a scene where Ivy tries to explain to Rachel some things that she is doing that are setting off Ivy’s vampire nature and you would have thought that would be a step forward in character relations, but then we go back to Rachel being afraid and why does Ivy look like she is going to attack?  I like character development to grow and there was nothing here.  We don’t understand Ivy any better by the end of the story.  We don’t have any hint of why she wanted to join Rachel so badly.  Ivy and Jenks each took one wish from the leprechaun, and we know that Jenks wanted to become sterile because Pixies breed like rabbits and he didn’t want his wife to leave him.   Ivy get a “to-go” wish on a chain and eventually she uses it, but we are never let in on what her wish was.  I can only presume this all comes out in future novels, but the author seems to save everything for the next novel.

In fact, Rachel’s plan to get the good on the bad guy leaves her breaking into his headquarters several times and getting caught each and every time!!   And why, the last time she is caught with a CD of information that she took from his drawer, did he let her keep it?  What bad guys is going to just be like “keep it and stop breaking into my office.”

So for 13 hours, we have no real character development of our main characters.  Nothing is settled between Ivy and Rachel.   We also have no success with the bad guy who I presume will be showing up in future novels.

The only character I liked was Jenks who, even though he was only 4″ tall, was always ready to jump into a fight and protect Rachel or back her up any way he could.

Rachel also meets a human midway through the book who has no magic, but seems to know a little too much about things but Rachel seems to blow this off because he is cute.   We really don’t any information why he seems to know a lot and at some point crossed he the F.I.B. so it is just more unfinished business for future stories.

I did grab a copy since it was on sale for $2.99 and I also picked up a discounted audiobook.  The narrator did a nice job but I didn’t like anything about this story enough to want to bother with book 2. 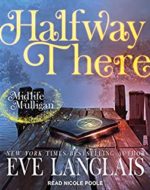