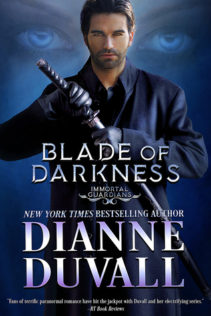 Dana Pembroke has been able to glimpse the future of those she touches for as long as she can remember. But she never saw Aidan coming. When the tall, dark Celt with the charming grin yet world-weary eyes walks through her door, the future she sees for him is one full of violence, danger, deception... and passion. Because amidst the terrifying battles that unfold in her visions, she also sees herself in Aidan's arms and in his bed. Dana knows she should keep her distance, but the tender moments and laughter they share entice her even as she finds herself thrust into a world of vampires, immortals, and other preternatural beings.

Immortal Guardian Aidan O'Byrne has been hunting and slaying psychotic vampires for nearly three thousand years, so visions of bloody battles don't trouble him. The battles Dana foresees, however, show Aidan's brethren turning against him, so he can't help but feel alarmed. While he spends as much time as he can with Dana, struggling to decipher her dire predictions, Aidan finds himself utterly smitten. Hope rises that he has finally found a woman who can banish the darkness and loneliness that plague him. But when vampires begin targeting Dana and a powerful enemy spawns chaos, will fate grant them time to find happiness together?

A wonderful addition to one of my favorite series.  You’ll have no choice but to fall for sweet, lonely Aidan.  This series is a must read.

We first met Aidan in Night Unbound. In a desperate attempt to find love, Aidan risked the wrath of Seth by breaking in the headquarters of the Network to look up the names of known female Gifted Ones. Aidan was making a list in hopes that he could figure a way to casually meet with these woman and finally find love after 3,000 years alone. His B&E almost got him killed when Seth assumed he was working for the enemy, not trying to find a Love Connection.

Realizing that Aidan had gone to great lengths and risked much to put together his List, Seth agreed to allow Aidan to transfer from his lonely, Scottish castle to the headquarters in North Carolina. While it has been two years and Aidan still hasn’t found a woman who he connects with, he has grown close to his fellow Immortal Guardians, and even calls Cliff his friend. Sadly, we see Cliff is beginning to lose his battle with the virus which is driving him mad, but Aidan has found a solution to help ease some of Cliff’s suffering. As an elder Immortal, turned 3,000 ago, his DNA is less diluted than some of the younger Immortals, and therefore Aiden has many abilities: he heals, he teleports, he is telepathic, he can also withstand a larger amount of sunlight. Aidan has found that if he teleports Cliff into the sunlight and heals him as the sun tries to damage his skin, the sun helps Cliff obtain a measure of “quiet” from the crazed voices in his head.  But we know this is not a long term solution.  No! We are not ready to say goodbye to Cliff.

Aidan’s list finally takes him to the door of Dana Pembroke, a psychic. As Dana attempts to read Aidan’s future, she sees herself in his future…and they are quite naked. As a telepath, Aidan is aware of Dana’s vision and for the first time in a long time, he has hope. While shocked, Dana has no problem with what the future is showing her and with the very gorgeous man before her, but that doesn’t mean she is going to jump him now.

Yet when Aidan comes again for another reading, Dana sees fights, with swords, against men who she can feel are not supposed to be Aidan’s enemies. She might not know him well, but she is determined to protect him for the visions and from the men who will try to kill him.

Dana hasn’t realized yet that just like Alice, she has just fallen down a Rabbit Hole and that her world will never be the same again…but with Aidan at her side, she might not be so upset with what her own future is showing her.

But romance, and getting Dana’s naked vision to come true, aren’t the only problems that Aidan has.  Seth finds out that someone is abducting gifted ones.  And many of the missing are on Aidan’s list and are woman he as accidentally met with.  Aidan knows he had nothing to do with the missing woman, but when videos start showing up showing Aidan as the last person to see the woman, even the Immortals have to wonder if loneliness has gotten to be too much for Aidan and he is creating his own captive haram.

Aidan has to prove his innocence.  He is so close to finally finding love.  He can’t have it ripped away now.

This series just gets better and better.  It really is so hard to wait for the next book.

Lowering his hand, Seth stepped back and turned his eyes, still bright with anger, on Marcus. “What the hell is wrong with you, letting them come here?”

Macus scowled. “Let? You know how hard her head is,” he said in his own defense. “I can only bang mine against it for so long before I end up caving. Besides, I knew you’d follow as soon as you realized where we’d gone.”

But Dana remained on edge. The danger had not yet passed. Seth looked the way he had in her vision. And she feared it might be coming to pass, that Seth would turn that wrath upon Aidan and attack.

Seth swung on Lisette. “Why are you here?”

Lisette gave him a penitent shrug and looked to Dana like a child being chastisted by a parent. “Aidan has been good to me. I want to make sure they were okay.”

Grumbling something under his breath, Seth shifted his gaze to Zach. “Et tu, Brute?” he said, sarcasm creeping into his deep voice.

Zach smiled and nodded toward Lisette. “I go where she goes.”

Seth grunted and turned those eyes, still blazing with fury, on Aidan.

Dana didn’t think, she just reacted, her vision strong in her mind.

Raising the tranq gun, she fired.

A dart lodged itself in Seth’s chest.

All around the room, mouths fell open as eyes widened. More than one person gasped.

Seth frowned down at the dart, then looked at Dana.

He didn’t pass out.

The second dart impaled him an inch or so from the first.

Aidan swung on her. “Are you mad, woman?” He eyed her with what could only be described as appalled astonishment.

All of them eyed her with appalled astonishment.

Except Zach, who burst out laughing, and little Adira, who just looked puzzled.

No one responded. They all just contined to gape at her.

“Well,” she complained as the silence stretched and frustration rose, “if you didn’t want me to tranq anyone, you shouldn’t have given me the damned gun.”

Zach, who had managed to corral his mirth, burst into laughter again.

Review: Blood Magick by Nora Roberts
« Review: On the Chase by Katie Ruggle
Audiobook Review: Beauty and the Highland Beast by Lecia Cornwall »

2 responses to “Review: Blade of Darkness by Dianne Duvall”