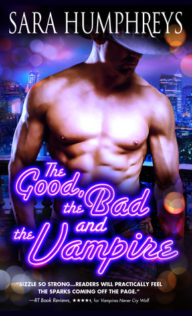 The Good, the Bad, and the Vampire (Dead in the City, #4) by Sara Humphreys

[box style=”rounded” border=”full”]In this latest novel, I was not enamored with the romance between Trixie and Dakota, but I did enjoy the introduction the gargoyles and the treasure hunt to find their missing gold. I also liked the realization that we are too trusting and prone to believe what we are told by those we hold dear. [/box]

Dakota Shelton has been a vampire for only fifty years. His maker came upon him after he had been attacked by a gargoyle and left for dead.  After he was turned, Jonner asked him for his help.  He told Dakota about his mission, personally sanctioned by the Emperor, to wipe out the gargoyles.   Detailing their history, the gargoyles were originally tasked with protecting the humans from other paranormal creatures. But after the gargoyles turned and murdered their own royal family and stole their gold, the only thing the gargoyles do is search for the gold. Gargoyles were so focused on the gold, that they were becoming reckless in front of humans and their actions endangered all supernaturals. The Emperor wanted them disposed of quietly because reckless or not, the other supernaturals might not condone the genocide of the race but too much was at risk.

After Jonner was murdered by the gargoyles, Dakota continued his task alone until the gargoyles were wiped out. A protector by nature, Dakota now works as a sentry for the presidium. Life if New York is certainly different than the small Texas town that he grew up. It’s as shocking a difference as Trixie LaRoux is to the women Dakota used to date when he was human. Even with her tattoos and odd colored hair, he can’t get her out of his every thought. It is because of his need to satisfy his curiosity about her that he follows her when she sneaks out one night and stumbles upon something that shouldn’t be out and about in the suburbs of NYC: gargoyle.

Dakota has no idea why Jonner would have lie to him but he must have had a personal vendetta against the gargoyle to insist they all must be destroyed.   But he now knows that what he did to them for decades was wrong and he will do anything to make up for it, and his first thought it to help returned their gold to them.  With the help of Trixie, Dakota returns to Texas to find the gold and return it to the gargoyles, but will that be enough?  After all the damage that Dakota has done, the gargoyles might just might demand his death.

THOUGHTS:
The introduction of gargoyles to the story shook up the usual cast of characters and threw something brand new into the mix. This is especially true since we don’t know how they will react to being found out. As a race, they have been in hiding since Dakota wove his path of destruction through Texas. Will they attack, now that they have been found out? Will the demand Dakota’s death as a sacrifice for all they suffered? The way things kept unfolding kept us intrigued.

I also like the basic premise that in some ways we are too trusting. How many times have you heard a story plot where Mom and Dad told their kids that old Rusty was off chasing rabbits at the farm, rather than telling the children that they put the old dog to sleep. They have no reason to doubt their parents. In many ways we are like those children whether we are listening to old family histories or just the nightly news. We believe what we are told as if it were simple fact. Here Dakota is saved by Jonner so why would he not trust him. After being attacked by a gargoyle, Dakota has no reason to doubt that gargoyles are dangerous, nor the fact that Jonner’s mission is secret since they are basically tasked with killing an entire race. He had no reason to doubt the man who saved his life, so he never questioned it. He trusts the wrong person and could pay with his life.

While the story itself was good, I didn’t connect with the romance between Trixie and Dakota. It just didn’t click with me. Individually the characters are great, but romantically, I just didn’t feel it.

“I can’t get enough of you,” Dakota murmured against her lips. He lifted his head but kept her pinned against the tree. “You taste like summertime in Texas. Sweet and hot. Damn, girl. If I still breathed, I’d be suffocated by how much I want you.”

Trixie stilled. there was something in the tone of his voice. Gentleness? Emotion? Whatever it was, it made her nervous. If he wanted to get physical, that was one thing but anything more than that was not happening. Sex? That she could do. Intimacy? Nope.

“Then why are you stopping?” She nipped at his lip. “Let’s keep this going. As long as we don’t do a blood exchange, we can avoid the full mate bonding. We can still fool around.”

She pressed her breasts into the hard planes of his chest and grasped the buckle of his pants.

“What’s your hurry?” He brushed his lips over her forehead and covered her hands with his, stopping her from going any further. “I said that I want to get to know you and I meant it.”

“That’s what I’m trying to do,” she said before popping up on her toes and flicking her tongue over his lip. “Come on. Saddle up, cowboy.”

“No?” Trixie said with more than a little incredulity “You don’t want me?”

“That’s not what I said,” he murmured. “And I believe I’ve made it plain that I want you.”

“Great. Then let’s go.” She tried to unbuckle his belt, but Dakota tightened his grip over her hands. Trixie fought the tickle of panic that flickered in her chest and let out a flippant laugh that didn’t even convince her. “Well, it would be easier to do this if you didn’t have clothes on.”

“That’s true, but gettin’ to know you doesn’t involve gettin’ naked.” His cocky grin widened. “At least, not yet.”

What. The. Hell. He was turning her down?

Anger and embarrassment flashed hard and fast as she yanked her hands away from his belt. Shoving him away from her, Trixie pushed her hair off her forehead, then folded her arms over her breasts. She couldn’t think of the last time, or any time, a man had rejected her for sex.

“I should’ve known you wouldn’t be able to seal the deal. All that swagger of yours is bullshit.”

Dakota didn’t move but kept his narrowed steely gaze on her, studying her like some damn bug under a microscope. She knew that look. She’d been on the receiving end of the judgmental well-aren’t-you-a-slut look plenty of times as a human.

“What’s the matter? Didn’t the women from your time have sexual freedom? You think I’m a slut because I want to fuck you without having a freaking conversation first?”

“This isn’t about sex. Not by a long shot.” Hands on his hips, he looked her up and down. “And, no, I don’t think you’re a slut but I do think you’re scared. And I sure as hell want to find out why.” He winked and said, “You can add that to my list of questions.”

She opened her mouth to tell him what he could do with his list. Before she could respond, a woman’s scream pierced the night. Fear bloomed bright in Trixie’s chest.