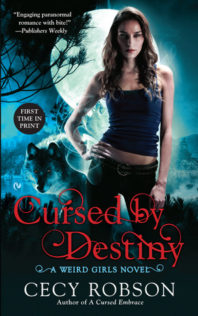 Celia’s a girl in trouble. Her heart is bound to Aric, but he is a pureblood were who must deny her or risk condemning his species to extinction. And that’s just her love life. She’s also been called to take down a group of demon terrorists looking to overthrow the paranormal world. (No pressure.)

In order to bring them down, Celia must ally herself to Misha, the master vampire who has made no secret of his desire for her. And if that weren’t enough misfortune for one girl, a clairvoyant’s prediction could destroy Celia and Aric’s love for good. The only way to protect the world from unbridled supernatural terrorism is for Celia to bind herself to her destined mate. And that doesn’t appear to be Aric?.

Warning: Contains Spoilers if you aren’t up on the series!

Celia Wird is still nursing a broken heart after left behind by her true love. Aric is from a long line of purebloods and he has been ordered by the Elder counsel to marry another pureblood to help replenish his species. But Celia has more problems than just Aric’s upcoming wedding to Barbara the bitch.

Since she is unwelcome at the were‘s Den, Celia has been living in guesthouse on the property of Master Vampire Misha and training with his vampires. The vampires’s fighting style is different from that of the wolves and Celia’s training is giving her an edge she didn’t have before and making her quite the powerful oddball. Living with Misha isn’t without it’s drawbacks, and I don’t just mean the fact that his family dress like the catholic school girls out of Bren’s favorite porno. Misha wants Celia to forget about the whipped Alpha dog and join him in his bed. Yet, even Misha’s constant attempts at seduction and the vamp’s pool on how long before Celia submits to the Master’s desires, isn’t Celia’s biggest problem.

Celia is not the girl with the most popular dance card at the Den’s Alliance celebration, not with the Elders wanting her out of Aric’s life, but she has caught the interest of another big cat shifter, Tye Gris de Leone, especially once the soothsayer, Destiny, declares to all at the party that it is Tye and Celia’s children who will save the world. As you can imagine, the news isn’t welcomed by the two men already fighting for Celia’s affection. But even her destined future with a poser like Tye isn’t Celia’s biggest problem.

The Tribe, which consists of evil witches and shifters who are releasing demons from Hell to impregnate unfortunate human women, has turned their full focus on Celia. Every creepy enemy whether all-powerful witch or newborn demon is whispering Celia’s name. Someone has ordered a Contract Hit straight out of Hell on Celia.

With too many men vying for her attention, except the one man she wants, and every evil demon coming for Celia personally, Celia has too much to handle and just when she had reached the end of her rope, her world is again turned upside down.

This story is packed with drama, heartache and non-stop supernatural action. I don’t know whether to applaud or fear an author that has no problem throwing her characters under the bus. In A Cursed Embrace, Cecy Robson doesn’t hesitate to have the demon lord toss Celia’s sister, Shayna, out as live dinner for demons. But having your body chewed on while you scream is tame compared to where Cecy takes her characters in this book.

Although werelion Tye comes off as a pompous jerk, as he gets to know Celia, he drops the suave wereGod fascade and he becomes a wonderful and brave character. We can definitely get behind this were. The whole Aric, Misha and now Tye love quadrangle is getting a little soap opera-ish. And between the fun and flirty Tye and the sexy, hot Misha, I never understood why Celia went for the moody, and now untouchable Aric. I am still holding a grudge against Aric not only for walking away from Celia, but for his being jealous and possessive even though he is supposed to marry someone else. He walked away from Celia. He has to marry and start a family with someone else, but he looses his mind at the thought of her being with anyone else. Really?? If you can’t be with her, let her move on with her life.

I guessed who was behind all of Celia’s problems and don’t understand why it is not as obvious to everyone in the story. I can also see where the soap opera story arch is setting us up for the next story.

I like the characters in this series and I like the mostly fun storyline and banter. There are some very dark aspects of this story and I am hoping we soon see the end of the Demon/Tribe storyline.

Received an ARC courtesy of the author in exchange for an honest review.

All I wanted was to go back to the guesthouse and lock myself in. Yet, when I saw Misha waiting for me in the garden, I knew I wouldn’t be able to make my escape. Misha stood along the freshly swept stone path like a man who could crush the pyramids to dust, despite holding a Cavalier King Charles spaniel in his arms. The dog was completely enamored with Misha. It must be a girl. The bitches love Misha.

“Hello, kitten. It pleases me that you made it back safely–despite your lack of escorts.” He pointedly glared at his bodyguards. Rivers of sweat ran down Hank and Tim’s faces and fear of Misha’s rage made them quiver. The Catholic schoolgirls wore smiles, obviously delighted they weren’t the ones in trouble for once.

My hands fell to my sides. I didn’t want to deal with any of this crap. “Misha, don’t be mad at Hand and Tim. I’m the one who ditched them. And what the hell’s up with the dog? I told you I don’t want to participate in your freaky science experiments.”

Misha sped to my side before I could blink. “Come now, my darling. How bad can it be?” He swatted my shoulder with the dog’s tail. I already had my guard up in an attempt to block the dog’s essence. It didn’t help. Either i was too upset or too distracted. Whatever the reason, I crashed to the ground in a violent seizure.

Hank swore. Maria said something like, “If she dies, I call dibs on de master.” A huge commotion ensured and everything became a dizzying blur of images and noise.

As my world and teeth rattled, someone lifted me from the ground. I screamed from the torturous agony the contact inflicted. In mere moments, I found myself on a very large bed. My body shrank and my ears elongated. I panted profusely, tasting merino wool as my lolling tongue scraped against the expensive fabric.

My vision cleared slowly. When I finally focused, I didn’t like what I saw. Misha and his vampires had me surrounded. Most had big grins and some were shaking, trying to hold in their laughter. Misha leaned over the end, his fists digging into the mattress, his shoulders rigid. A sinister shadow darkened his stone cold features. “Whoever laughs first shall die by my hands,” he said in a deadly whisper.

There was such an immediate silence, I feared I’d gone deaf. I tried to sit up. Big mistake. The supersized room spun in a stomach-lurching whirl. I quickly flopped back down and shook my head to clear it. My long ears slapped against my fuzzy face. The shake had helped some, but by then I was royally pissed off.

What the hell, Misha? I told you this was a bad idea. I can’t believe you freaking did this to me. Just when I thought we were friends you had to pull a prick move like this!

That’s what I was thinking. What came out was, “Woof, woof. Yip, yip, bark growl, bark!”

Liz leaned in close to my face, her ice blond hair hitting my little wet nose. “I think she’s trying tell us something. Do you need to go for a walk, Celia?”

Agnes Concepcion adjusted her glasses and peered down her nose at me. “No, she wants a biscuit. Celia’s always hungry.”

I growled at both of them.

“She does not want a damn biscuit,” Maria spat in her thick accent. “She wants ah steak.”

Someone wanted to kill me, Aric was getting married, and I was a damn dog. I wanted to pee on the fire hydrant I called life. What I didn’t know was that thing were about to get much, much worse.

Cecy (pronounced Sessy) Robson is a full-time writer, registered nurse, wife, and mother living in the Great Northwest. A member of Romance Writers of America, she attributes her passion for storytelling to the rough New Jersey neighborhood she was raised in. As a child, she was rarely allowed to leave the safety of her house and passed her time fantasizing about flying, fairies, and things that go bump in the night. Gifted and cursed with an overactive imagination, she began writing in May 2009. Her Weird Girls Urban Fantasy Romance series is published with Penguin Random House’s Signet Eclipse and released to stellar praise from multiple reviewers including: Publisher’s Weekly, USA Today, and Romantic Times. THE WEIRD GIRLS: A Novella, SEALED WITH A CURSE, and A CURSED EMBRACE are now available. A CURSED MOON: A Novella, releases December 3, 2013, followed by CURSED BY DESTINY, January 7, 2014.

One response to “Review: Cursed by Destiny by Cecy Robson”