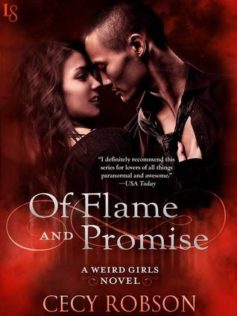 Of Flame and Promise (Weird Girls, #6) by Cecy Robson

[box style=”rounded” border=”full”]I love the idea that Cecy Robson has switched from Celia to Taran in her narrative of the series. I am frustrated that she has taken a step back in time since we left Taran injured and floundering with her powers and self-esteem. Now it might take books and books before we start to unravel how she deals with her injury and all that comes with it. [/box]

Taran is the focus of this latest novel in the Weird Girls series. Not only did Cecy Robson twist the narration around but she took us back in time to between Cursed by Destiny (Book 3) and A Cursed Bloodline (Book 4). It also seems that Taran and Gemini’s relationship will be no smoother in the telling that Aric and Celia’s.

Gemini wants to complete the mating ritual with Taran. He is certain she is his mate and his wolves want it official. No matter how confident and put together Taran looks on the outside, she’s a hot mess on the inside. Taran’s biggest fear is to end up like Celia. All the Wird sister’s have had a hard life but Celia and Taran seemed to have endured the worst of it. It took a lot for Celia to open her heart to Aric and become his mate and yet he still walked away when ordered to by his Elders. (At this point in the story, Aric is engage to the pureblood werewolf bitch.) Deep down Taran knows that Aric is suffering as much as Celia, but that doesn’t change the fact that they were mated and Aric walked away.

Taran is afraid that is she drops all her defenses and allows Gemini in, truly trusts him never to hurt her or abandon her, and he walks away, she will be absolutely destroyed. Taran isn’t brave enough to face that kind of soul-withering loss. Not yet. But after a conversation with her sister, Taran is willing to give in to one thing that Gemini wants from her. He wants her to meet his parents.

And make an impression she will, just not the type of impression she really was hoping for. It’s a supernatural version of Meet the Parents. No matter how hard Taran tries to impress his traditional Japanese parents, luck is just not with her. When they are all attacked by the Tribe, will Taran finally be able to impress them with the her bravery or will they not live long enough for it to matter?

THOUGHTS:
I love the character to switch to Taran. I loved Celia but after all those books of her torturing herself about Aric (especially when she has hot Misha drooling over her), I was ready for this change up. There was so many great characters in the series and sometimes they did no more than breeze through a scene or two. I like that one short story, A Cursed Moon, told by their friend Bren and we were able to learn a lot more about his backstory and friendship with Celia.

Unfortunately, we might have changed narrators but Taran has more hang ups than Celia so this might just become another group of stories dedicated to how Taran and Gemini can’t get it together either.

My biggest complaint about the switch is that we took a huge step back in time. When we left Celia and Aric at the end of A Curse Unbroken (book 5), there was finally puppies and rainbows and the possibility of a happy future for these two kids. But in the final battle in A Curse Unbroken, Taran is seriously injured and needed to be healed by magic rather than Emme and because of that, her ability to shoot lightning and fire has gone wonky and her self-esteem, which is already low, has plummeted. How many book will it be before we finally see what happens after this injury and how it will effect her mindset and her relationship with Gemini.

Before they could say anything more, I strutted down our walk and into the driveway, thinking I could make a quick and uneventful exit.

“Taran Wird! Must you dress like the devil’s slut?”

Mrs. Mancuso was hands down the worst neighbor in history, and the biggest pain in the ass in support hose. The cold breeze sweeping in from the lake flapped her neck skin like a sail, but the chill it brought had nothing on her stare. My nips could have snapped clear off from the coldness darkening her beady eyes. I took a few deliberate steps in her direction, only to have Emme clasp my arm and pull me back. “Taran,” my sister pleaded. “For once, just count to ten and ignore her.”

I considered Emme’s plea. For about two-point-five seconds, until Mancuso trained her glare on Shayna when Shana offered a friendly grin and a wave. “What’s your problem?” I asked the old hag. Seriously, Shayna was just being nice. “Did you wake up on the wrong side of the crypt this morning?”

Her beady eyes narrowed. “No, I just live next to harlots,” she answered.

Here’s the thing: Say what you want about me, but don’t mess with those I love. “Zip it, you old coot!” I shot back. “Don’t you have Snow White to poison?”

Emme groaned as Mancuso abandoned the broom she was using to sweep her walkway and edged to her property line. “Give me one reason I shouldn’t kick your skinny ass,” she challenged.

I threw out a hand. “Um, I don’t know. Maybe ’cause you’d trip over your neck skin, break a hip, and lose your dentures?”

Shayna leapt in front of me. “She’s just kidding, Mrs. M.” Shayna always tried to keep the peace, but her comments only earned her a stiff middle finger in addition to the one Mrs. Mancuso was already waving at me. If she could have managed, she probably would have flipped Emme off with her toes. There was evil, and then there was Mrs. Mancuso. Most demons wouldn’t have stood a chance against this walking ad for adult diapers.

One response to “Review: Of Flame and Promise by Cecy Robson”