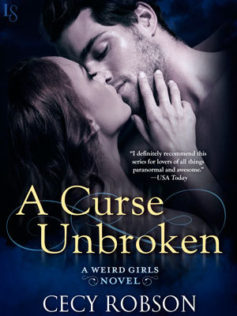 [box style=”rounded” border=”full”]This is the last book (for now) from Celia’s POV and author Cecy Robson doesn’t send her off with a party. Evil is still chasing after Celia in all its forms and kicking her butt at every turn. Can Celia hold out long enough to survive and finally get her happily ever after? [/box]

The next Weird Girls book will be told by Celia’s sister, Taran, but Celia doesn’t get to kick back and coast through this last story. Everything evil is making one last play for Celia before she steps out of the spotlight. I am glad that for the first time in this series I remembered that this was an Urban Fantasy so I was ready when everything kept trying to take a bite out of Celia.  I think she spent a total of five pages not covered in blood and bruises.

First shapeshifters make one last stab at killing Celia and ruin a wonderfully romantic attempt by Aric to finally propose to his mate. The shapeshifters are defeated but they have left behind something like a virus which is spreading through the werewolves and the Wird sisters.

Meanwhile Aric is being sent on a mission to find a stone that can grant wishes and every paranormal being is also looking for it, including Celia and Misha’s vampires. The stone is so old that it has become sentient and it exacts a high price for the wishes that it grants…and it has taken a liking to Celia and is following her around like a lonely puppy whether she likes it or not. This puts another target on Celia’s back since there are many who would happily kill her to be the next holder of the stone.

If Celia can survive this next wave of evil, she might just survive long enough to reach that happily ever after.

THOUGHTS:
I like Celia and it will be nice to see her take a back seat in the next book and (maybe) not spend every moment of the day being chewed on by some creature or other.   After several books being forced apart, Celia and Aric can finally step out together in public as a couple.  I did miss Misha in this story since he was noticeably missing, off in Europe trying to find a mate of his own to replace Celia in his life.  There was minimal interaction with Misha’s vamps and it appears that while the Master is away, the vamps will play and they appear to like costume parties.  Interesting.

There is hinting at a relationship blooming between Bren and little sister Emma, and I heartily approve.

The next book will be from Taran’s POV.    Snarky sister Taran has become more subdued in this book and I miss her wit.  After the final battle in the prior story where Taran lost an arm and the elders tried using her pack bond with Gemini to re-grow one.  She has since lost control over her magic, and she is self-conscious of her white as snow limb.  This is causing a huge rift between her and Gemini.

It will be interesting to see how the series changes when the story focuses on Taran rather than Celia.

Each floor had been crafted of that same dark wood and designed with a more masculine feel, which was why the bright pink floral couch set near Aric’s door gave me pause.

“Peter. What’s that?” I asked, motioning ahead to the eruption of prissiness.

I continued alongside of him. “What girls?”

“You know the ones who want to have sex with Aric.”

Peter continued on his merry little way while the world stopped spinning on its axis directly below my feet. “What?“

He answered while he fumbled with the keypad to Aric’s door. “Yeah, they have a club and everything. Anyway, they got tired of standing around waiting for him so they all chipped in and bought that ugly thing.” He punched in a few more numbers. “Sorry, I forgot the code,” he said when the light finally flashed green.

He reached for the handle, but became distracted by my death grip on his wrist.

Anger spread through me, heating my body so fast perspiration gathered along my crown. “Just so I’m clear, there are women–who want to sleep with my fiancé–and they sit there”–I motioned with an accusing finger to the fucking couch–“so they can pounce on him the minute he shows?”

Peter stared won at my wrist, then back at me. “Ah, perhaps I’ve said too much.”

I tore my eyes away from Peter and looked down the hall to where playful giggling echoed from the level below. Two of Aric’s fans skipped up the steps, pausing when they caught sight of me.

Instead of running for their lives, as they very much should have, they strutted like runway models on a catwalk. Then again, runway models didn’t typically dress like whores.

The one with red hair down to her elbows wore a black mesh top, no bra, and tiny black shorts. The other one, a brunette with short spiky hair and long bangs, let her open red robe sway behind so I’d have a direct view of her lacy panties and massive boobs stuffed into the matching bra.

Neither were barefoot. It seemed clear heels were the preferred footwear of were tramps everywhere.

I stood there with my mouth hanging open, still attached to Peter who’d begun to struggle. The members of the slut club smiled, obviously pleased by my dumbfounded reaction. They fell onto their couch, crossing their long legs and laughing.

The redhead who sat nearest to me tossed me a wicked grin over her shoulder before ignoring me completely. “So,” she said to her friend. “did you get a new car yet?”

“No,” the brunette pouted. She stuck out her bottom lip in a way that made me think she’d practiced that move in the mirror a thousand times. “But you know what they say, ‘Don’t have a car? Ride Aric Connor.'”

Peter dropped my basket and shot off like a jet the moment I released him. He hadn’t quite made it to the second flight of stairs when bimbo number one and bimbo number two crash-landed in the foyer with their demolished love seat on top of them.

2 responses to “Review: A Curse Unbroken by Cecy Robson”